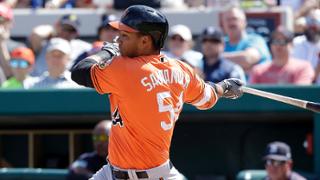 With about a month left to go in the minor league season, the Orioles has seen there ranking among MLB farm systems rise quite a bit because of breakout seasons from some of their top prospects.

With this in mind, I thought it would be a good idea to look at what an Orioles farm system would shake out in n MLB style 25 man roster, taking into account the results and play we’ve seen this season.

This is not a re-hashing of the Top 40 O’s prospect list I wrote up around the trade deadline, but gives you more of a look about where the depth lies in the Orioles system, and where the team may look to beef up its prospect base in the future. It should be noted, that the sole ranking of the player won’t determine if/where they are placed on this list. Other factors like speed, power and defense will be taken into account because as we all know, baseball has a lot more to it than just based on overall talent itself. However, their ranking in my top 40 is listed next to the player’s name down below.

Now with all that conjecture out of the way, let’s get into the roster.

Baltimore’s system yields a pretty solid order, especially with hitters 1-6. Cedric Mullins is the perfect leadoff bat because of his speed and ability to reach base even when he doesn’t barrel the ball fully. He has some sneaky power as well, as his frame may be small, but he uses strong lower body efficiently for solid doubles power. The trio of Mountcastle, Sisco and Hays are interchangeable in terms of where they rank in the Orioles farm. All three can become above-average hitters at the major league level, so having them in the middle of the order is a big boom.

Anthony Santander plays both corners, but not very well. He’s got lot of raw power and should be able to barrel the ball well enough for a lot of that pop to translate in-game, although he does have to refine his approach and swing just a bit before he’s going to make a mark in the majors. Jomar Reyes is another potential high-power, low average hitter who is NOT a third baseman long-term. D.J. Stewart is a bit of a liability in left field, but he brings enough power and contact skills to make his way as a regular. His recent solid run in Double-A has upped his stock. Milton Ramos wasn’t ranked in the top 40, but maybe he should have been. He was acquired from the Mets for international bonus dollars and has found his bat in Delmarva. The young shortstop also profiles as the team’s best defensive option at the position. The Orioles second highest draft pick from this past June isn’t a natural third baseman, but the Orioles system is devoid of hot corner options, so he has enough arm to fit there, even though he lacks the power projection to fit the typical profile for a corner infield spot.

Breazeale continues to make a name for himself in Aberdeen as he’s still hitting in the upper .300’s in early August, which is pretty insane. He’s obviously bound to slow down, but he has a loose swing that pounds the opposite field. The defense remains a bit of a question long-term, but it’s far too early to move him off the position this early in his development. Gassaway hasn’t hit for the type of pop that his body should yield in High-A this season, but he flashes some barrel control to work the middle of the field. He makes for a nice platoon option with D.J. Stewart as they both profile as likely up and down outfielders long-term. Josh Hart is currently rehabbing from injury and performing well so far. He has a lot of speed and is the versatile outfield bench option that team’s need. Finally, Mason McCoy fits well as a utility man as he played this role a fair amount I his final season as an Iowa Hawkeye, although he’s played shortstop exclusively in rookie ball.

The O’s 2017 first round pick clearly has the highest upside of any pitcher in the Orioles system. It’ll be a little while before you hear him making a major league impact being that he is coming from high school, but he’s still got a reported advanced feel for his age and he should develop three major league caliber pitches when he reaches that point. Akin has been the more impressive arm out of him and Sedlock because his stuff plays better multiple times through a lineup. He maintains his fastball in the low-mid 90’s throughout a usual outing, with his primary weapon being a putaway late breaking slider. He’s got a real chance to become a mid rotation type, even with some of the command issues he has to overcome. In other news…Hunter Harvey is back baby! He’s currently rehabbing in Aberdeen after a long road back from Tommy John. He’s the team’s lottery ticket who could end up being the best arm in the system if his health gets back on track. He’s always had the arm talent and a projectable starting pitcher frame, he just has to stay on the field.

I could argue that Brenan Hanifee has been the biggest riser in the system after the likes of Hays and Mountcastle with the way he’s pitched so far this season. He’s a long ways away being a high school draftee from last year. But the fastball will get to plus as he develops into his large frame and he has enough athleticism to project his slider to become major league average. He’s not a slam dunk to remain in the rotation, but due to the lack of projectable starters in the Orioles system, I’ve slotted him as a back end guy. Results wise, Alexander Wells has been the best Orioles pitching prospect this season. He’s limited his walk rate to an insane 0.7 BB/9 IP, while pitching to an ERA of 2.45. Wells struggles putting hitters away because of his below-average heater, but the command is plus, which makes him a reasonable innings eating number five. Tobias Myers would have been a threat to take this spot, but he’s in Tampa Bay’s grasps now that the Orioles have the hot hitting Tim Beckham on their major league roster.

The starting rotation had a clear cutoff point, the projected bullpen does not. Tanner Scott and his triple digit fastball will make him a likely high leverage reliever. I decided that Sedlock fits better as a set-up man because of his inability to maintain his stuff deep into starts and his overall dip in stuff this season. He’ll remain a starter in the minors for the time being, but I think this shift is looking more and more likely because of how the move will help his sinker play up and his fringy control less of an issue. Liranzo is a lesser-known arm, but in a right-handed mold of Scott, he’s an electric hurler with a big fastball and not much else currently, which makes him an intriguing project in Double-A at the moment.

I know that Zac Lowther is a second rounder and has been dominant as a starter in Aberdeen,. In fact, he’s allowed just three earned runs through 28.1 innings of work. But, there’s a reason that highly drafted college players are supposed to dominate. The competition will stiffen at the higher levels and I’m not a big believer in his average stuff working well multiple times through an order. His fastball is deceptive and he attacks both sides of the plate well, so there’s back of the rotation upside there, but his stuff will play much better as the only lefty middle reliever in this bullpen, a la Brian Matusz circa 2012.

I haven’t seen Ramirez yet as the guys in Pinstripes traded him to the Birds for international bonus money. He’s in Double-A right now after pitching effectively for the Yanks Double-A squad, averaging close to a strikeout per inning already this year in the Eastern League. Ofelky Peralta is another power arm that’s starting in Frederick, but has pretty much a zero percent chance to be a starter long-term because of mechanical issues, along with his well below average offspeed stuff. His fastball is swing-and-miss, sitting 95-97 with heavy arm side run that is tough to put a barrel on when thrown close to the plate.

The final spot I decided to give to Meisinger because he’s performed admirably at an advanced level in 2017. His stuff isn’t anything more than average, as he’s more about pitchability and location. His fastball sits in the low 90’s and his curve and change are expected to be workable, albeit nothing ahead turning in the bigs. His ability to throw strikes makes him a likely major league contributor in the bullpen in 2018, which earns him the final spot in the relief corps over the likes of higher upside arms like Matthais Dietz or 2017 3rd round pick Michael Baumann. It also should be noted that I would have included lefty Garrett Cleavinger, instead he was dealt for the resurgent Jeremy Hellickson.

Greg Goldstein is a scout/contributor covering the Eastern, Carolina, South Atlantic and NY Penn Leagues for Baseball Prospectus. Greg also is a contributor for the FanSided general baseball blog, Call to the Pen. Having graduated from the University of Maryland, College Park in May of 2017 with a Bachelor’s degree in Communications, Greg was a beat reporter for the SB Nation blog, Testudo Times, covering the Maryland baseball team during their 2017 season.