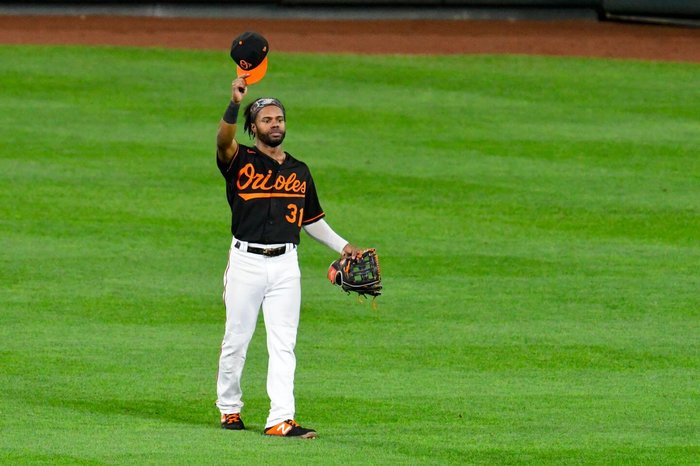 Welcome to ‘3 Up, 3 Down’, the weekly column breaking down the three hottest and three coldest Orioles players based on their performance during the previous week. It has proven to be an interesting exercise and good opportunity to highlight the highs and lows of a long baseball season. This (two) week(s) comes after series against the Yankees and Red Sox.

Mullins officially became the first Orioles player to reach the 30/30 milestone (30 homeruns and 30 stolen bases in the same season for the uninitiated) on Friday and only the 43rd player in major league history to do so. It is a historic season from the Orioles center fielder who performed so poorly in 2019 that not only was he demoted to AAA after batting .094 with a .337 OPS over 74 plate appearances but he couldn’t even stick there and was sent down to AA. He made a great comeback in the pandemic shortened 2020 season batting .271 with a .723 OPS over 153 plate appearances. I think the Orioles would’ve been happy if he would’ve maintained that level of production over a full season in 2021 but instead he dropped hitting from the right handed batters box and became an MVP candidate on a team that barely won 50 games. Miraculously he may have been playing slightly injured for some time because as soon as he reached that incredible milestone he was rested the next two games for hamstring soreness. He pinch hit for Jahmai Jones in Sunday’s game and blooped what would’ve been a single into the outfield if it wasn’t for bad baserunning by Kelvin Gutierrez. Hopefully that mistake doesn’t rob him of finishing the year with a .300 batting average (currently sitting at .299) but regardless of nice round numbers he has been one of few bright spots when thinking about what players from this team will be contributors on the next contending Orioles crew.

Speaking of players who could be on the next good Orioles team, I would say that does not include Severino but that doesn’t change the fact that he had a great week at the plate. With the top prospect in all of baseball Adley Rutschman due to be the starting catcher no later than May 2022 and Severino due for a salary of around $2.4 million in his second year of arbitration it makes sense for the Orioles to move on from him whether that be via trade or non-tender. Pedro is a bat first catcher who hasn’t been hitting like one since the first month of the 2020 season. He is one of the worst defensive catchers in baseball and I think the team is going to want a veteran defense-first backup that could get everyday playing time early in the season. Severino is below average in every conceivable metric other than max exit velocity because he hit a 114.6 mph this season which puts him in the 93rd percentile. He has hit much better in the second half than the first (.269 batting average and .773 OPS versus .220 and .619) and is much better against left handed pitching (.288 batting average and .822 OPS) than righties (.213 and .603). His solid second half is propped up by a power driven July (.235 batting average, .863 OPS) but his second best month of the season is the current one where he has an OPS of .726. With Nick Ciuffo being added to the roster with a little more than a week left in the season I wonder if that is an early signal for the upcoming moves in the offseason or just an extra body to help some banged up players get through the remaining schedule.

The player who has the most excuses for his poor performance on the mound this season has to be Lowther. Not only did he (and many other pitchers) miss a chance to learn from a season of pitching in AAA due to the missing 2020 season, he was never able to get into a routine schedule all year. From making the occasional start in AAA to occasionally getting called up to the Orioles only to be sent right back down to being stuck in the limbo that is the taxi squad and never being used he was only able to accumulate 64 innings between all levels this year. Which is why it was nice to see him have such a great start this past week even if it was against the Texas Rangers. When Lowther is able to pitch confidently and feel in control of the game you can see the pitcher that flew through the system without any bumps in the road from 2017-2019. He’ll get one more start this season against the Boston Red Sox on Wednesday. That will be a good test to see if he can build on a good start against a much tougher lineup. Out of the many pitching prospects who had disappointing seasons – Dean Kremer, Keegan Akin, Alexander Wells, Bruce Zimmermann (mostly injury related) – Lowther has the best chance to bounce back with a productive season in 2022. I haven’t given up on any of them, maybe revised what I think their ceiling is, but with the right offseason plan and a better idea of when and where he is going to pitch I think he could surprise some people next year.

Trey is worn out. He is fighting with a sore oblique and the exhaustion that must come from missing a year due to defeating cancer. It is a testament to him that he keeps grinding and going out there to play almost every day. Most notably it has been the power that is missing with only two homeruns since August 1st and a .225 batting average over that time. Whether you’re in favor of trading, extending, or standing pat with Mancini over the offseason I don’t think this two month stretch to end the season should impact his value. It had to be a physically, mentally, and emotionally draining seven months and especially so if you consider he basically didn’t get a break around the all-star game. Instead he almost won the homerun derby swinging the bat approximately a million times. Just an incredible story no matter how you slice it. I’ve gone back and forth in regards to what to do with him moving forward, a battle of the heart versus the head. If a team wants to give you something of value for him over the offseason I think you have to take it. Otherwise just hang on to him and re-visit it before the trade deadline. I see no harm in just letting him play out his contract if that’s what it comes down to. This isn’t a Manny Machado situation. But unless he is willing to take a huge discount and feels comfortable just being a role player as soon as 2023 I don’t see the sense in extending him. Fact is he is a first baseman/DH who will be 30 years old next season. He should still be an above average player for the next couple years but that is a player type that ages fast unless you’re a borderline hall of famer. Not just an Orioles hall of famer.

Santander hit a two run homerun on Sunday but later came out of the game after grounding out with leg discomfort. More lower body injuries for a guy who has been bothered by them all season after spraining his ankle very early in the year. Its hard to get a great read on what the Orioles have going forward in Santander but like MLB.com beat reporter Joe Trezza tweeted out it may be best to look at what he has done from 2019-2021. .252/.295/.475 (.770) and a 102 OPS+ over 240 games. That sounds about right to me. A league average corner outfielder who hits the ball hard and far but not consistently and is in the bottom 10% in walk rate. If someone is willing to trade value above that I think it is worth taking especially given two consecutive seasons now of injury issues. But if not he is still under team control for three more years and there is value in having a league average corner outfielder while you wait for the bounty of outfield prospects earn their way to the majors. If he comes into 2022 fully healthy and has a great first half of the season then you have a much more valuable trade piece right around when someone like Kyle Stowers could be ready to make his major league debut.

Greene started a bullpen game in Philadelphia against the Phillies and pitched a scoreless inning where he had to work through a lot of trouble and still ended the week with numbers this bad. He pitched in four games so if you take out the game he “started” that gives him 1.2 innings over three appearances to the tune of a 43.11 ERA. The guy throws hard but he has no idea where its going and if it is over the plate too much it doesn’t have enough movement to miss bats. His struggles aren’t surprising in the least. He was a guy signed to a minor league contract prior to the season with some intrigue due to the upper 90’s velocity he has. He only got called up to the majors because of absolute need, I’m not sure his 7.39 ERA and 1.96 WHIP over 28 innings grabbed the organizations attention, and was claimed off waivers by the Dodgers of all teams before the Orioles claimed him right back. He hasn’t given up a hit on his curveball through 23 innings, a pitch he throws 12% of the time, but every other offering has an opponents batting average of .300. Ok fine its .273 against his changeup by my point still stands, its at least .333 against the rest. He will indubitably be a part of the massive 40 man roster churn once the season ends and the only way he will be back with the organization in 2022 is if he clears waivers and accepts an assignment or is signed to another minor league deal.