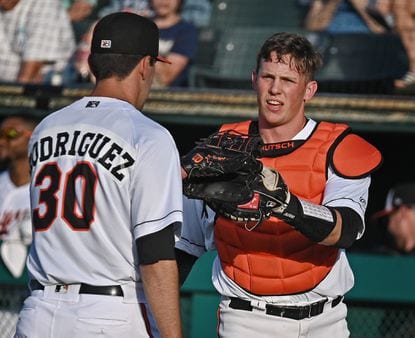 With the 2021 MLB draft in the books, it’s time to update our Top 30 prospects list, but we decided to not only update our rankings, but expand them as well!

After more than a year of having no minor league baseball to watch, the nightly routine of firing up MiLB TV and watching the future of the Baltimore Orioles organization has been a real joy. Players we had all but written off have resurrected themselves and showed sustained growth in most cases, prospects who weren’t close to being on our radar are now demanding our attention, and the cream of the crop has certainly met expectations, which has helped create a sense of optimism while watching the season unfold.

After an enormous amount of support from listeners and seeing the growth that has been taking place down on the farm, we wanted to highlight as many players as possible, hence our expansion to a Top 50! Even with an expanded list, there were a large number of players not included (many younger international players who have received high praise from around the industry), which is a great sign for how deep this system has become.

Without further ado, Baltimore Sports and Life’s Top 50 Baltimore Orioles prospects from myself and my On The Verge Podcast Co-hosts Zach Spedden, and Bob Phelan. (2021 draft picks are designated with a (*). As they sign or return to school, we will update accordingly.)