Five Under-The-Radar Orioles Prospects To Watch For In 2022 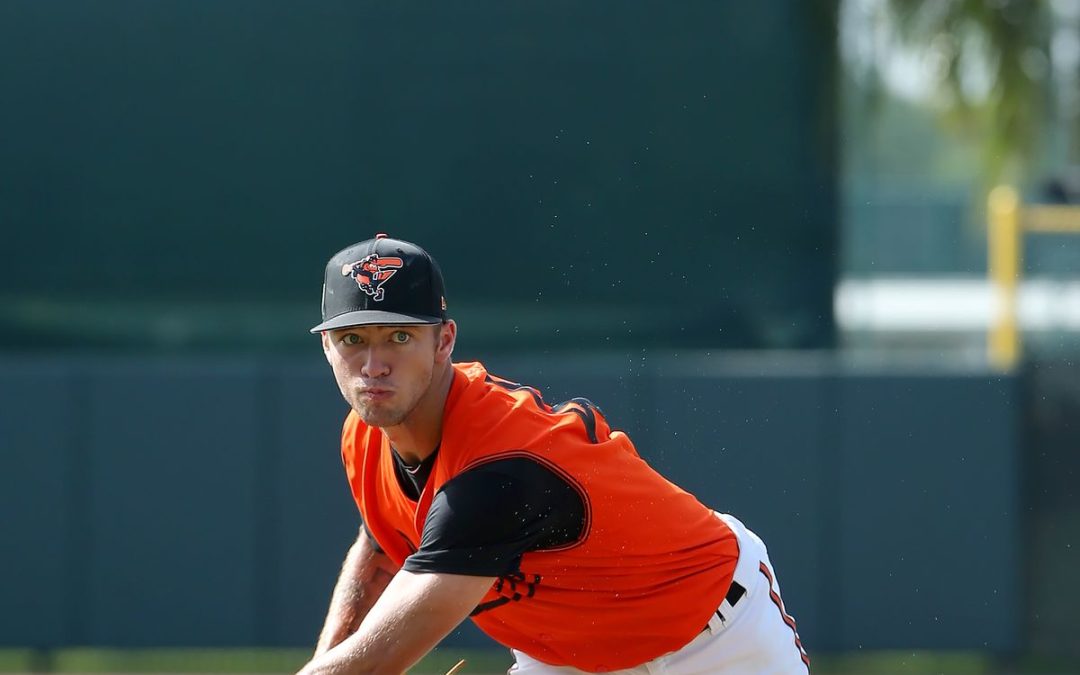 The 2021 season was a season full of success stories across the Baltimore Orioles minor league landscape. To be honest, documenting the season over at On The Verge gave me more joy as a baseball fan than ever before, fueling even more excitement as we prepare for the 2022 campaign.

Top prospects Adley Rutschman and Grayson Rodriguez cemented themselves as the top overall prospect and top pitching prospect in baseball, respectively, but more importantly, we saw real growth from a long list of prospects who have now put themselves in a position to make an impact at the major league level, or shoot up prospect rankings (for the younger guys out there).

Outfield prospect Kyle Stowers might be the best example here. We knew Stowers had the raw power coming out of Stanford, but Stowers unleashed the power tool in 2021, is now considered a Top 10 prospect in the league’s best farm system, and he showed that his offensive game is more than just hitting rockets into the night sky.

There were also a handful of prospects who made their names well known last season, after entering 2021 as virtual unknowns with big question marks. Pitchers Kyle Bradish, Zach Peek, Jean Pinto, and outfielder Zach Watson instantly come to mind here. If you didn’t know what these guys were about before the year started, you should be well versed at this point.

So, who could be the ones to emerge in 2022? These are all either younger prospects who we haven’t heard much about, whether that’s due to injuries or other reasons, or more advanced prospects who have had some success so far, but haven’t been widely hyped up yet, despite showing signs of a big jump forthcoming.

Here are five Orioles prospects who could emerge on the scene next year.

You may have never heard of the name Raul Rangel, but could he start the year as a Top 30 prospect in the Orioles system? We at On The Verge will be releasing our revamped Top 50 list in just a few weeks and I bet Rangel makes his debut on our list, with the stuff and ceiling to crack the Top 30 by the end of the year.

Rangel was signed for $150,000 as part of the 2020 international signing class and made his pro debut in the FCL this past season. Listed at 6’3” and 160 pounds, Rangel can already touch the mid-90s, with plenty of room to fill out, add some strength, and beef up that fastball even more. He was throwing 85-86 just before the Orioles signed him and quickly worked up to 90-92. It’s easy to dream of what that velo could be with another year or two of physical development.

Rangel should start 2022 in Delmarva where he will pitch all year as a 19-year-old. As you will see as you continue reading, if you want to watch a large group of extremely young, high-ceiling, exciting prospects in 2022, go ahead and get your Delmarva season-ticket package.

Across 36 FCL innings, Rangel owned a 3.25 ERA and struck out 45 compared to just nine walks. Impressive numbers from one of the youngest pitchers in the league. When Rangel was originally signed, Baseball America’s Ben Badler tabbed Rangel as a prospect with Top 100 potential. Now, he enters 2022 with an opportunity to put his name on the map and join Jean Pinto as two of the more exciting pitching prospects in this system with two of the highest ceilings.

It seems like a lifetime ago, but back in July of 2019, the Baltimore Orioles traded pitcher Andrew Cashner to the Red Sox for two young prospects out of Boston’s Dominican Summer League camp, infielder Noelberth Romero and outfielder Elio Prado. Both are still just 20 years of age and have yet to reach full-season affiliate ball (2020 pandemic didn’t help), but could 2022 be the year of Elio Prado?

Originally signed for $85,000, Prado appeared in 60 games during his debut season back in 2019, slashing .300/.403/.396 with almost as many walks (30) as strikeouts (36). He also chipped in three home runs and 12 stolen bases, although he was caught stealing 10 times. DSL stats from a 17/18-year-old don’t tell you much of anything, but the stat I do like to acknowledge from players at this stage is the walk/strikeout rate, and Prado impressed there.

Unfortunately, Prado missed the entire 2021 season due to an injury, but he was back taking hacks in Sarasota during the fall.

While he’s a very young, very raw prospect, Prado’s strong arm and athleticism lead most evaluators across the industry to believe his ceiling is that of a center fielder who can get on base at a high clip and hit for +/- 15 home runs a year. Even though he’s now missed two years, Prado has reportedly filled out a bit now and should be a full go for 2022, where he will still be just 20 years old and likely to begin the season with Delmarva.

If he can have a productive 2022 campaign, Prado could easily be back on the map as a prospect to watch. He was a fringe-Top 30 guy with the arrow pointing up after coming over from Boston and now has the opportunity to lead a group of international signings set to make their full-season debuts next year.

Trading away Mychal Givens for Terrin Vavra straight up would have been a good deal for the Orioles. Throw in Tyler Nevin? Even better. Add in Mishael Deson as well?! Too bad Jeff Bridich stepped down before Mike Elias could swindle Zac Veen for two 28-year-old relievers in Bowie.

As an uber-projectable outfield prospect, Deson has a lot of aspects of his game that make you daydream about what could be if his development path leads him down a successful road. Standing at 6’3” and 155 pounds, Deson won’t turn 20 until mid-way through the 2022 season, but he already got a small taste of full-season ball with Delmarva last year after tearing up the Florida Complex League (.930 OPS, 147 wRC+).

He’s got the frame to hit for good power, advanced plate recognition for his age, and a smooth, easy feel to hit. Like Prado, Deson is extremely raw but he has an enormous ceiling. It was very clear during his time in Delmarva that the game was a little too fast for him, but he flashed all the tools and I walked away from his 2021 season highly intrigued to see what a full offseason in the lab and weight room could do for Deson’s development. With a plethora of older outfield prospects in the system, Deson could spend his entire 2022 season growing and developing in Delmarva, and he still wouldn’t be 21.

Orioles Director of International Scouting Koby Perez believes Deson is a potential five-tool player and loves the fact that the big man can steal bases and potentially stick in center field. If he takes off in Delmarva next season, Deson will quickly skyrocket up the prospect ladder.

I tried to tell you all as soon as the Orioles signed Brandon Young as an undrafted free agent out of UL-Lafayette after the 2020 MLB draft. Did you listen?

The 6’6” righty came out of the gates strong with Delmarva, posting a 3.23 ERA, 30 percent strikeout rate, 1.25 WHIP, and a .211 average against across 47.1 innings. He was rewarded with a promotion to Aberdeen in late July and performed even better.

Across 37 High-A innings, Young recorded a 3.89 ERA, a 35 percent strikeout rate, a .207 average against. He also lowered his walk rate from 11.1 percent to 9.8 percent and saw a big spike in his groundball numbers, going from 37 percent to 56 percent.

Young sits 92-94 mph and can hit a tick or two higher with his fastball, and he also throws an advanced changeup, a curve, and slider. He throws all four pitches for strikes and I think the curveball offering has the potential to give him three-advanced pitches in his repertoire. I’ve said from the jump that he’s likely suited for a bullpen role, but let’s see what he can do in Double-A next year. If he can continue to miss bats, the walks continue to trend in the right direction, and he can hold up across 100+ innings, he could get an opportunity to end 2022 in Triple-A and continue to work a starter’s load.

The organization is high on Young, as well. His name seemed to be pushed out there often late in 2021 and he was the first name brought up by Orioles beat writer Jon Meoli when he was on a recent episode of On The Verge when discussing under-the-radar prospects. He will likely begin the year as a Top 30 prospect on our list.

Even more casual observers of the Orioles farm system know who Drew Rom is, but even after a dominant 2021 campaign that saw him end the year with an impressive run in Double-A, Rom is a virtual unknown outside of Birdland. That could change in 2022.

I get it. Lazy analysis corners Rom into the “soft-tossing lefty” hole, which in turn makes you think of Zac Lowther and Alex Wells and their subpar MLB debuts. Drew Rom isn’t Zac Lowther, Alex Wells, Keegan Akin, or Bruce Zimmermann. He’s a cut above and that’s a hill I’m willing to die on.

He saved his best to close out the year, giving up no runs across 14 innings in his final three starts, with 18 strikeouts, one walk, and just five hits allowed. Rom then tossed five scoreless innings with seven strikeouts and no walks in a playoff start. Overall, 2021 was a fantastic season for Rom that went under the radar due to big seasons from Grayson Rodriguez, Kyle Bradish, Jean Pinto, and others.

Rom brings four pitches to the mound, gets swings and misses with all of them, commands the fastball (which can hit 94-95 mph) well in the top of the zone, and can work effectively against righties and lefties with a plus-slider and curveball. He works methodically and with purpose on the mound, wasting no effort or pitch during an outing. When a pitcher who has been consistently 2-4 years younger than his competition is able to hit the ground running and show notable improvements across four different levels in three seasons, you should probably take notice.

Rom is Rule 5 eligible next season so if he can translate his early-career success to Triple-A, Rom could end 2022 on the Orioles 40-man roster and in the mix to be in the 2023 major league rotation.

I’ll throw out one more name before wrapping up, RHP Noah Denoyer. The 6”5” righty went undrafted after the 40-round 2019 draft and impressed during the 2021 season, his first full season of pro ball. Across Low and High-A, Denoyer went 5-3 with a 2.76 ERA, 1.19 WHIP, a .212 average against and 81 strikeouts to 30 walks across 71.2 innings. Walks were a big issue early in the season, but Denoyer was able to turn that around as he finished the year looking even more impressive in High-A.

I’ve been a big fan of Denoyer since early on in 2021 but when Brad Ciolek, Orioles Scouting Director, name dropped Denoyer on a recent episode of the MLB Pipeline podcast, it was a pleasant confirmation that the organization is also a fan of what Denoyer brings to the table.