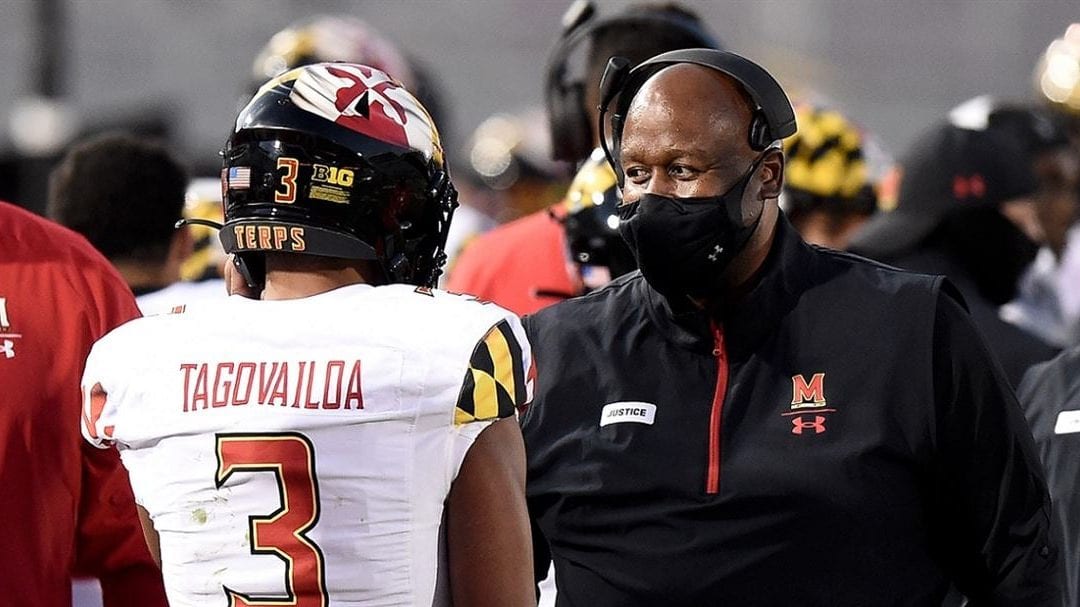 The wheels continue to roll for the upcoming campaign in the fall for Maryland Football. Earlier this week there was the official signing day that took place and while Maryland did not add any players (all their signings took place during the early signing period in December, by my count they have 2 more slots open that presumably they are holding open for transfers) Mike Locksley and his staff’s recruiting prowess was on full display as measured by the final rankings of the Class of 2021. According to 247Sports they finished #19th overall and #4 in the Big Ten. This means they jumped 12 spots from #31 last year overall and 7 spots from #11 in the Big Ten. As of now they are projected to have the #20 class next year overall and #5 in the Big Ten although a lot can change and will between now and then. This is what Maryland needs to do in order to win is get the players on campus first and foremost with consistent Top 20-25 Classes. It’s all about the players, coaches while important are secondary. The players make the coach more than the coach makes the players.

Speaking of coaches, we have seen several changes on the staff this off-season and while especially at the offensive line spot continuity is so desperately needed, if there are going to be changes now is the time to have some of those changes take place. While QB Taulia Tagovailoa’s first experience albeit during partial season was under OC Scotty Montgomery, he will now get a full off-season and season under new OC Dan Enos whose resume indicates that Tag’s should further progress as a QB and in an offense that remains the same since it is Locksley’s offense and not Montgomery’s. Enos and Locksley also worked together at Alabama so there is a big comfort level there for both. As to the rest of the roster the O-Line is going through a fair amount of change so a new coach with a solid NFL resume is an upgrade and a plus. With WR Coach Joker Phillips leaving after two seasons to go to NC State he leaves behind a talented WR room that is established to an extent. So, there will be a new coach there but whoever comes in will have a lot to work with and is in a good situation.

The biggest change and it is unfortunate given the way the defense got better last year especially after the change to more of a 4-3 look is a new Defensive Coordinator as Jon Hoke went back to the NFL to coach DB’s with the Atlanta Falcons. However, there are enough new players coming in to add to a solid foundation that the job should attract good candidates and any good coach that comes in will build on the successes of last year while also being able to implement the style that best utilizes the talent on that side of the ball. While Locksley prefers a 3-4, after seeing what the switch to a 4-3 did last year I would think he is open to changing. Frankly in today’s game you must be able to run multiple fronts anyway.

As I see it, Locksley’s first year was mostly remnants of coaching staff’s past and we saw that after the season with the number of transfers. Regardless of COVID-19 taking place or not this was going to be and was a transition season with Locksley recruits, players from past coaching staff’s who decided to remain and buy into how Locksley is running the program and transfers from the portal. We saw some further transfers out in the last few months not due to a lack of buying in but rather because the roster is getting better which means playing time will not nearly be as easy to come by. That is a positive sign. The 2021 campaign will essentially be an all-Locksley roster. With that, the successes and forward momentum of the program last year coupled with talented recruits and additional transfers is now setting the table for Locksley to translate that into further progress in competitiveness and what should be a few more wins on the field. Although as I have said I think 2022 is the season where it will really show up in the win column.

Also, this week as announced in a press release by Maryland Football:

The University of Maryland and the Big Ten Conference have released updates to the 2021 football schedule, it was announced on Friday. The Terrapins are scheduled to play seven of their 12 games inside Maryland Stadium, marking the first time since 2011 that Maryland will play seven games in College Park. For the first time since 2001, the Terps will play all of their non-conference games inside their home stadium.  Maryland, which will play four of its first five games at home, opens its 2021 slate against non-conference rival West Virginia on September 4. The Terps will play their first road game as they open up Big Ten play at Illinois on September 18.

-Initial takeaway is the way the schedule plays out with the roster that will have a fair amount of Freshman and Sophomores is extremely beneficial with the amount of home games especially early in the season. Unfortunately, MD Football has never been a big draw for the home fans, and it will be incumbent on the new players to change that but even for the Freshman last year who will be Sophomores they will be used to playing in front of no one only this past season it was due to Covid-19. Still though would you rather play at home or leave early and travel in a plane to an away stadium, fans or no fans.

-The Terps open against West Virginia who is not the program it was under Dana Holgorsen in the last 5-8 years or Rich Rodriguez going back 15 years ago. They are in a time of transition as well as they went 5-7 in 19’ under new Head Coach Neal Brown (who came over after a successful stint as HC at Troy) and this past season went 5-4. Nonetheless it ought to be a solid non-conference Power 5 game against a similar program from a building timeline standpoint.

Howard did not provide much in the way of competition the last time MD played them, but they are local team, and it should be a confidence builder for the young guys before they kickoff at Illinois to open Big Ten play on the road. Illinois is under New HC Bret Bielema who previously was HC at Arkansas and Big Ten School Wisconsin.

Then it’s one final non-conference game against Kent State before its all Big Ten opponents the rest of the way. Not one of those games will be an easy one the rest of the way which speaks to the depth of the Conference. Is there a chance there to start 4-0, sure there is, and we ought to start getting more confident about this team but from there on out it will be tough. However, the Terps will no longer be an automatic win for most of those teams outside of Ohio State. Their last four games of the season will require little travel so that will help in the physical aspect of it for the players. It is still too early to give a hard analysis of each team, but this East Division is going to be something this year and I can’t wait, there will be some good competition. As always Go Terps!

One final note, weekend programming is back after being paused due to Covid on 105-7 The Fan in Baltimore, streaming on the Radio.com App. This past December I celebrated by 10th Anniversary on the station primarily doing weekends and Terps Football and Basketball. While I will not be doing any Terps Basketball this season on the weekends (I am hoping to be back at it next season) I fully expect to be back doing Football this upcoming season. My show times may vary but generally my program is on Saturday afternoons 3-6pm but check Mike Popovec 105-7 The Fan Facebook page to be sure. Hope to hear from you!