Make The Argument: Juan Soto and The Orioles 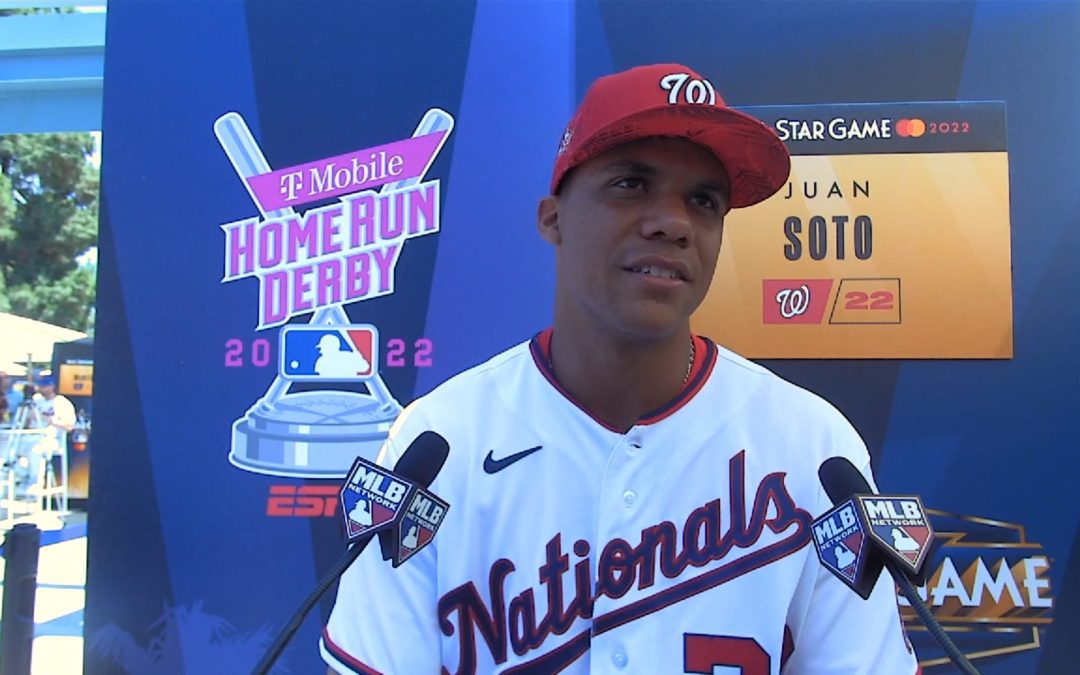 I set out today to write about five hitters who the Orioles might unexpectedly target at the trade deadline. Baltimore isn’t in the market for simple rentals. They want players who will meaningfully increase their odds to win in 2023 and the half decade beyond. If those players also happen to help eek out a Wild Card slot in 2022, that’s gravy. The batters I intend to highlight are aspirational targets. It’ll take creativity on Mike Elias’s part to acquire one of them.

Naturally, I began the exercise with Juan Soto. After telling half the story with 500 words, it occurred that maybe we should focus on only Soto today. We can talk about five more targets soon enough.

A caveat: I will do the infuriating thing every team blogger does and pull together a sample offer for Soto. This is meant to be illustrative, not accurate. Soto will cost a seemingly absurd amount, even with a little idea I included to cut the prospect cost.

In short, because their farm system and active roster are terrible, and Soto has rejected two large (but still cheapskate) extension offers. There’s speculation the Lerner family would like to sell too. Getting the books ship shape should improve the value of the franchise. If Soto won’t stay as a bargain, a lean payroll with a passable farm system might improve the team’s appeal to prospective buyers. Most importantly, it doesn’t look like Soto will have an opportunity to contribute to a winning Nationals roster before he reaches free agency. He’s wasted on them, and they know it.

Why Should the Orioles Want Him?

We can answer this a dozen ways, but the best reason is really simple. At 46-46, the club is limping out of a prolonged rebuild. Ownership is the subject of considerable controversy (a topic I’ll otherwise ignore in this piece but could very well affect the club’s ability to take aggressive actions). Nothing announces “we’re back baby!” more than acquiring the best player in baseball. From a financial perspective, Soto would pay for himself (excluding a possible contract extension) in direct ticket sales.

To Extend or Not to Extend…

‘Tis the question. There are some advantages to taking it season-to-season. Let’s say things don’t go well for the club in 2024, but Soto has performed as expected. He could be traded again for another hefty return. If, as some perceive, Soto will only sign a market-rate extension, then the Orioles could simply get in line with such an offer after the 2024 campaign is completed. That’s regardless of how the next two seasons turn out and applies to other clubs as well. An untimely major injury could change his free agent outlook.

Otherwise, an extension probably has to check-in north of $500MM over more than 10 seasons. It’s a hefty commitment to one player, one that only a few franchises can tackle.

Who Can Afford Him?

There are two angles to affordability when it comes to Soto – money and prospects. By examining these, we’ll see the market is actually quite small.

I assume the Nationals will not entertain offers from the Mets, Phillies, Braves, or Marlins. The Mets and Phillies don’t have sufficient prospects to make a trade even if they could swallow the budgetary hit. The Braves and Marlins tend to avoid large outlays. Atlanta also has a dearth of prospects.

Soto is on a $17.1MM contract this season. About $7.6MM remains to be paid. Additionally, he is club controlled via arbitration for two more seasons. The total outlay for those seasons should be in the neighborhood of $60MM.

Presently, the Orioles are on the hook for $2.975MM to John Means and arb raises to Anthony Santander (about $5MM), Jorge Lopez (about $4MM), and Austin Voth (about $1MM). I doubt the options for Trey Mancini or Jordan Lyles come into play. Most of us expect Santander to be traded. Voth is a nontender candidate. Basically, they’ll spend about $20MM on league minimum guys and anywhere from $7MM-$12MM on other rostered players.

I estimate the Orioles revenues can immediately support a payroll of around $150MM with room to grow at around $25MM per season throughout a window of contention. Soto fits within that hypothetical budget with around $90MM to spare.

The Dodgers and Yankees, despite large payrolls, can open the books for a player of Soto’s caliber. That’s because their revenues dwarf the current luxury tax threshold. They’d rather not pay tax but also recognize the value of special players. The Dodgers even have an immediate need for a left fielder while the Yankees would have to continue using less-than-ideal defensive alignments to squeeze in Soto.

The Mariners, Cardinals, Tigers, Red Sox, and Giants are large payroll clubs with under $100MM committed to their 2023 rosters. A few other clubs I won’t completely rule out are the Blue Jays, Rangers, and Twins. They’d need to contort a bit to make it work.

The Cubs are probably at the wrong stage of their rebuild. Similarly, the Angels could probably afford Soto, but they have to realize their problem isn’t a lack of superstars. They need to disaggregate their payroll. The Astros probably feel like they have plenty of offense and need pitching.

I’m not sure about the Padres who are rumored to be pursuing an extension with Joe Musgrove. That would probably put them out of the running for Soto. However, A.J. Preller makes interesting, aggressive moves. For now, I’ll leave them out since I suspect they’re focused elsewhere.

All told, eight teams look like they absolutely should be on the phone with the Nationals. Another three to five clubs should keep tabs on the market.

To field an attractive offer, a club has to have at least one Top 10-caliber prospect and considerable farm system depth. The Orioles have both available. The Yankees, Mariners, Padres, Cardinals, Red Sox, and Giants seem to have the necessary pieces too. The Dodgers, I believe, could get there via quantity even if the top-end quality doesn’t match other offers.

Since I figure the Padres have other priorities, that leaves the Nationals with seven prospective partners. An advantage in the Yankees and Dodgers favor is that they can spend through any issues created by the trade. But will they want to? The other clubs mentioned, including the O’s, need their farm systems to continue yielding fruit.

While nobody has acquired a player of Soto’s caliber with this much club control remaining, there are still a couple historical comps we can examine. For Chris Sale, the White Sox received Yoan Moncada (roughly Rodriguez or Henderson), Michael Kopech (between Rodriguez and D.L. Hall), Victor Diaz (equivalent to a fringe top 100 prospect), and Luis Alexander Basabe (ditto). Sale, I’d estimate, was roughly half as valuable as Soto. He was under team-friendly contract for another three seasons.

The other comp, if Corbin happens to be included, was the Mookie Betts trade. The Red Sox didn’t exactly make out like bandits in this one. Betts was probably about a third as valuable as Soto at the time of the deal due to less club control. The Sox received Alex Verdugo (similar to Cowser), Jeter Downs, and Connor Wong. My perception is Boston misevaluated Downs who at the time had star-caliber stats on top of a mixed scouting reports.

A Wrinkle in the O’s Favor

A possible key to a Soto deal might be Patrick Corbin. Like David Price in the Betts deal, Corbin could serve to subtract from Soto’s value to the point where an inquiring team might both make a fair offer and have something resembling an acceptable farm system after the trade.

Corbin is owed about $69MM through the end of 2024. Including Corbin in a Soto trade would reduce the prospect price tag from unfathomable to merely jaw-dropping. Unlike other contenders, the Orioles also happen to have an immediate use for Corbin. Similar to Jordan Lyles, he regularly faces 25 to 30 batters a start. Baltimore needs innings to get through this season, even if they aren’t always pretty.

The Orioles are the only team that can add Corbin’s salary without batting an eye. The price is particularly prohibitive for the Dodgers and Yankees. Not only would they be overpaying for Corbin, they’d also owe additional luxury tax and could slide north of the high penalty thresholds.

The Mariners and Tigers are the only other clubs I believe could finagle the budget for both Soto and Corbin.

Based on the two comps above, the cost for Soto should be on the order of four Top 10-caliber prospects and another two to four players who have some chance to develop into a role player of some kind.

It is, I believe, strategic for the Orioles to include Corbin in their offer. It’s a way to nudge most of the other prospective buyers out of the market while holding on to a few of their top prospects.

The following offer seemingly cannot be topped by another club, short of the Mariners including Julio Rodriguez. From this starting point, Baltimore can attempt to economize. Maybe there are less developed prospects who can be subbed in place of guys on the cusp of the Majors. Maybe the Nationals are so keen to dump salary that only one front-line prospect is needed to headline a quantity-based package. Maybe something else!

Should They Do It?

Only if they’re serious about contending in 2023 and 2024. The price looks like a lot, but Soto will probably outperform all nine of those players combined over the next two and a half seasons. Beyond that… it’s anyone’s guess.