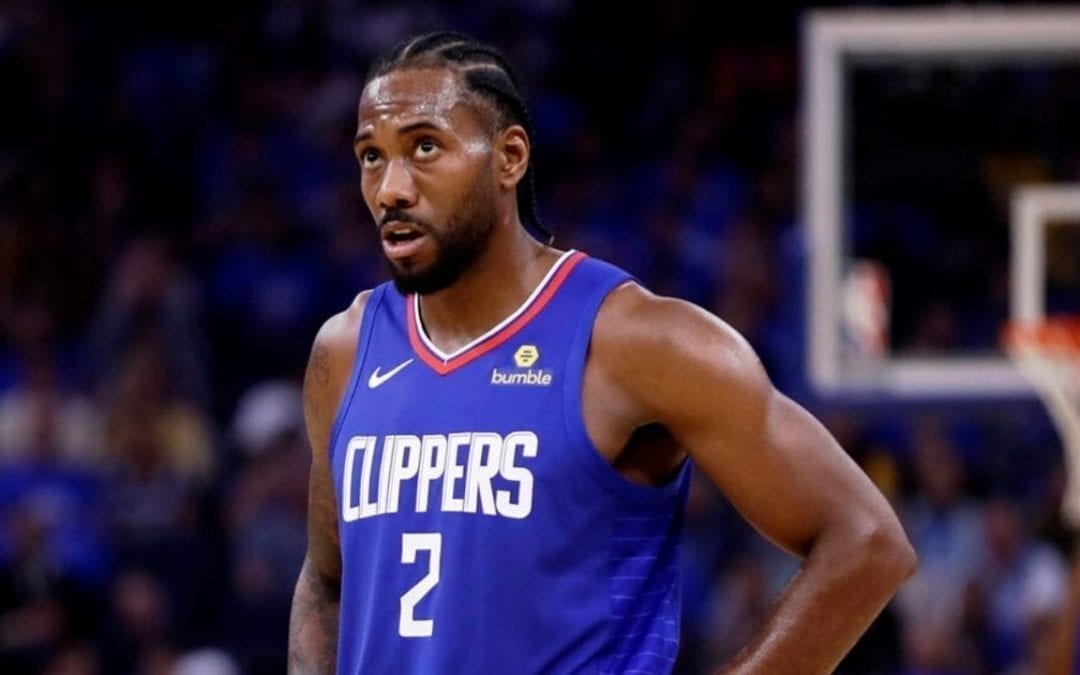 No NBA Playoffs 1st Round breakdown is complete without taking a look at the tough matchups in the Western Conference. Things have already begun to heat up as the Denver Nuggets defeated the Utah Jazz 135 – 127 took a 1-0 lead in the first official playoff series game of the 2020 postseason. But the Western Conference has many more interesting matchups around the corner and even better storylines that could make this one of the most competitive playoffs pushes in NBA history. As the rest of the West awaits tipoff time, here are my key storylines, x-factors, and series predictions for each matchup in the NBA Western Conference bracket.

After calling his shot like Babe Ruth, the NBA Bubble MVP Damian Lillard and the Portland TrailBlazers have clawed their way into the playoffs with a chance to achieve one of the biggest upsets in NBA history. The TrailBlazers came into these eight seeding games with only a 9% chance of making the postseason and not only overcame the odds but now they are now the first Western Conference team with a losing record to qualify for the playoffs since the Phoenix Suns, Minnesota Timberwolves and LA Clippers all did it in the 1996-97 team. Now they are asked to overcome expectation again as they look ahead to face Lebron James and the top seeded Los Angeles Lakers.

The combination of Lillard, CJ McCollum and a young Gary Trent Jr. will be key in the matchup with the Lakers as Los Angeles’ questions regarding their backcourt still remain. But most of all, I believe that the X-factor for the Blazers is Carmelo Anthony who hit a league-high six clutch threes in the bubble which helped Portland ascend to the position they are in. Coming off of a disappointing departure from Houston last season, Anthony has comfortably stepped in as a third scoring option along Lillard and McCollum. Averaging 15.4 points on 43% from the field, Anthony has scored 20+ in five of the eight seeding games. His contribution as that tertiary scorer at the wing position along with Jusuf Nurkic down low will be the deciding factor as to whether or not the Blazers can continue this Cinderella ride.

In the case of the Lakers, their only case is that they have Lebron James and Anthony Davis on their team. Although most of the time a dynamic duo of the two top-five players in the league would normally be enough, going against a high-octane offense like Portland will make things extremely difficult for Los Angeles over the course of seven games. Whether it is Kyle Kuzma, JR Smith, Danny Green, or someone else, somebody in that backcourt is going to have to step up as a third scoring option on this team. The Lakers top heavy duo will certainly propel them to some wins, but over the course of an entire series I believe that will only get them so far.

Prediction: Portland TrailBlazers in 7; Maybe it is the euphoria of Lillard’s miraculous run talking, but this TrailBlazers team looks extremely dangerous and they enter the series hands-down the most battle tested team in the playoffs. I think that momentum of fighting into the playoffs will continue to be in effect and that will be what gets them to the second round. The Lakers may have Lebron James, but the Playoff Dame is no slouch either. Close series that comes down to the final possession.

The Clippers enter the playoffs as a heavy favorite to win the whole thing and rightfully so. The combination of All-Star two-way forwards in Kawhi Leonard and Paul George combined with Patrick Beverley is reminiscent of the Michael Jordan-Scottie Pippen-Ron Harper trio defensively that used to lock teams down. They have two 6th Man of the Year candidates in Montrezl Harrel and Lou Williams who both average nearly 19 points a game off the bench a piece. They even have extended depth with guys like Landry Shamet, Reggie Jackson, Ivac Zubac and others who provide quality production in any rotation coach Doc Rivers throws out. They are one of the most complete teams top to bottom and that spells trouble for the young Dallas Mavericks.

Speaking of Luka Doncic and the Mavericks, this team is not entering the playoffs with the kind of confidence that you need to upset a team like the LA Clippers. Entering this series with 3-5 record in the seeding games, the only bright spots for this team have been the young duo of Doncic and center Kristaps Porzingis. These two stars were both respectively 5th and 6th in the bubble averaging 30 points a piece yet their amazing statistical outputs did not result in wins. This will be a great chance to see how they fare in the playoffs for the first time ever and it should be a perfect proving ground for them to show how they stack up against one of the better teams in the league. Nonetheless I think that they will fight and claw to hang with the Clippers, but the combination of talent, depth and experience will be too much for this young team to handle.

Prediction: LA Clippers in 7; I have faith that the talent of Luka Doncic and Kristaps Porzingis is good enough to win them a game or two. I also think that a guy like Seth Curry who got hot from three for the Blazers last postseason will find his stroke this year and steal them a game. Unfortunately, I think that the Leonard-George connection will be too much to handle as they will rise to the occasion and put this young Mavericks team in heartbreaking fashion.

After what we just saw today, this series has the chance to be way more exciting than most would have assumed. Despite losing Game 1, Utah has a lot to build on after watching star guard Donovan “Spida” Mitchell go to work as he dropped 57 points which us the third most points in a playoff game behind only Michael Jordan and Elgin Baylor. Mind you, this Jazz team lost by only ten points in overtime without their lead point guard in Mike Conley who left the bubble for the birth of his child.

This is a team that simply needs one more perimeter scorer to provide 20+ points to help them overtake the Nuggets and overtake the series. In the absence of Conley, that guy could be Jordan Clarkson who scored 18 points in the game and is averaging 15.6 points on the year since being acquired from the Cleveland Cavaliers. If he can step up as the other perimeter scorer alongside Mitchell, this team has the firepower to hang with Denver.

In regard to the Nuggets, it is hard to beat them when Jamal Murray goes for 36 points with 20 points coming in the fourth quarter. Denver has the 5th best offensive rating (113.1) in the NBA and that has a lot to do with the productivity of Murray and All-Star center Nikola Jokic who chipped in 29 points of his own along with ten assists. This team has the kind of high-powered offense that can put teams away early, but their biggest question is: Can they continue to close games? This is a team that can either be an extremely hot shooting team from the floor or they can be the kind of team that shoots themselves out of the game and lets other teams into the game.

Prediction: Utah Jazz in 7; I think that the Jazz can even up the series 1-1 and then overtake the series when Mike Conley returns to play. This may be a stretch, but Utah has the kind of talent to overcome the extensive runs that Denver tends to go on and has a true closer in Donovan Mitchell that they can go when the game comes down to one possession. I expect Mitchell to put the team on his back and steal the series away from the Nuggets.

A battle of the contrasting expectations. On one side there are the Houston Rockets who enter these playoffs with potentially the most expectations behind the Lakers, Clippers and Bucks. James Harden has been on the brink of the Finals the last few years and fell just short after running into the Golden State Warriors. Russell Westbrook, who will not be playing in Game 1 due to quad injury, has not made it past the first round since the departure of Kevin Durant in 2016.

With two 31-year-old NBA MVPs in the backcourt, this team’s champion window is quickly closing and the opportunity to represent the West in Finals is only getting more difficult with the rise of the Memphis Grizzlies and the Phoenix Suns. This is their first time together in the postseason since the 2012 NBA Finals and it may be their last chance to truly contend before that aforementioned window shuts completely.

On the other side are the Oklahoma City Thunder who were given a 0.02% chance by ESPN to make the playoffs this season. This team was expected to blow up the roster and trade guys like Chris Paul, Steven Adams and Danilo Gallinari for future draft picks and young talent to start a rebuild around Shai Gilgeous-Alexander who they acquired as part of the Paul George trade. This team instead kept their roster together and has become one of the top five teams in the West on the back of the three-man backcourt of Paul, Gilgeous-Alexander, and 6th Man of the Year candidate Dennis Schroder.  This series could potentially be a battle of the small ball lineups where the center matchup between 6-foot-6 PJ Tucker and 6-foot-11 Steven Adams may be the deciding factor of the series.

Prediction: Oklahoma City Thunder in 7; This is probably the hardest series to pick for me because both teams are talented across the board. I think that Westbrook’s absence in the first game will be critical for the Thunder to take the series. If they can take a 1-0 series lead, the momentum will swing in favor of OKC. If the Thunder drop Game 1 then that will put them at a significant disadvantage that may only make the deficit harder to close once Westbrook returns. The Thunder have five potential high-volume scorers in Paul, Gilgeous-Alexander, Schroder, Gallinari, and Steven Adams. Houston only truly has Harden and Westbrook with the potential of Eric Gordon or Robert Covington getting hot from three. The Thunder’s guards can hang with the All-Star backcourt for the Rockets and the big man matchup leans in favor of OKC, giving them the win: Slightly. Tough series comes down to the final possession.