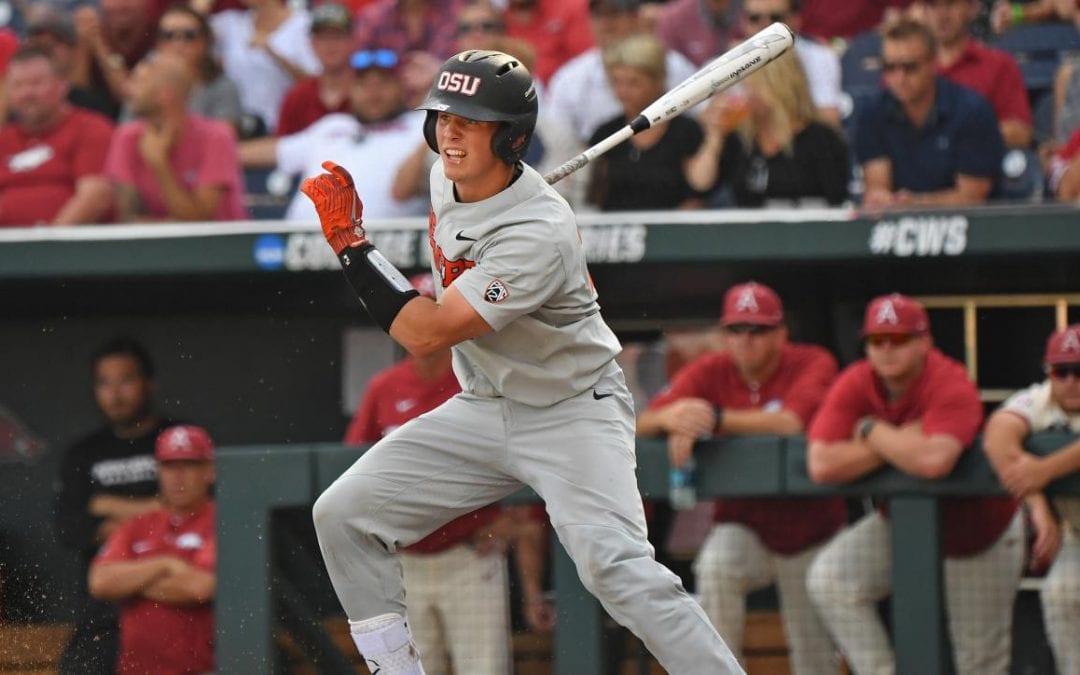 A pair of BSL’s Minor League Analysts–Zach Spedden and Nate Delong–have come together for their latest discussion on the Orioles’ farm system.

In this edition, Zach and Nate look at the state of the Orioles’ farm system and discuss when Adley Rutschman could make his major-league debut. They also delve into other topics, including which Orioles could make Top-100 prospect lists going into next season and their current assessments of the Orioles’ return from the Los Angeles Dodgers in last summer’s Manny Machado trade.

Following the draft and the start of the international signing period, where do feel that the Orioles farm system ranks among MLB organizations?

Zach: It has certainly moved up, especially with the addition of Adley Rutschman, who’s almost certain to rank among the top prospects in baseball going into 2020. Beyond that, I still think there are some question marks that prevent the Orioles from having an elite farm system—mainly the lack of high-impact talent beyond Rutschman, and how far some of the higher-ceiling pitchers (DL Hall and Grayson Rodriguez included) still have to go in their development. The system is definitely moving up, though, and I think Mike Elias and his regime should be given credit for doing what they can with the situation they walked into.

Nate: I think it’s hard to say without analyzing how the rest of the league did, but I think the Orioles did well for themselves overall. In the draft, they got some potentially good players, including some in their first couple of picks in Rutschman, Gunnar Henderson, and Kyle Stowers. Anytime a team adds a talent/prospect like Rutschman (easily their best prospect now), that’s going to boost the farm system. I also think the Orioles system has benefitted from seeing some good performance/development from some of the organization’s better prospects. As for the international players that have signed, I think it’s just good to see the team become much more involved in that side of player acquisition by signing 27 players. But I would caution anyone who thinks this crop of international signees automatically boosts the farm system in anyway. Obviously the players who just signed could turn into good major leaguers, but I think Jon Shepherd made a good point on Twitter around the July 2nd signing period. His point was essentially that the Orioles haven’t been deeply involved in the international market long enough for it to make a difference yet, since many teams reach agreements with these kids several years before the signing date. Although I did find the idea of making t-shirts to advertise that the team was going to sign international players pretty amusing.

What is a realistic ETA for Adley Rutschman to reach the major leagues?

Zach: I think 2021 is the safest prediction. His talent and an accelerated development schedule could make a late 2020 debut possible, but as of now I cannot envision a scenario in which the Orioles will accelerate his development just for a few late-season games. The exact point in the season in which he debuts is going to depend on a number of factors, including service time considerations and whether the Orioles genuinely feel that he would benefit from extended time in Triple-A before reaching the majors. If he does not reach Norfolk late next season—which would require an aggressive development schedule—then giving him the opportunity to catch more experienced pitchers prior to promoting him to Baltimore might be something that appeals to the Orioles.

Nate: Obviously it will depend on how well he performs and the adjustments that he makes as he moves up through the levels, but I don’t think 2021 is out of the question, especially for a player with the pedigree of Rutschman. I think that timeline assumes he gets moves up to short season Aberdeen soon, finishing the year at Low-A Delmarva, and followed by the 2020 season in High-A Frederick and AA Bowie. This should allow him to spend 2021 at some mix of AA, AAA, with a late season MLB call-up. Throwing a wrinkle into this projection though is the fact that Rutschman is a catcher. And while he is a good catching prospect, his development time could take some unforeseen detours due to the unique demands of the catching position.

As of now, which Orioles prospects will likely be Top-100 overall prospects heading into 2020?

Zach: Rutschman is a lock, and should very high place on most lists, while DL Hall and Grayson Rodriguez are likely to be in the mix. Beyond that trio, there are two interesting cases in Ryan Mountcastle and Yusniel Diaz. Looking strictly at offense, Mountcastle has done enough at Norfolk to remain on most Top-100 lists going into next season. However, I suspect that some evaluators will have hesitations over him given that he has settled in at first base, which limits his overall prospect profile. Diaz also has some question marks, mainly with the fact that injuries have limited his development in what was supposed to be an important season for him. On the other hand, the argument can be made that, when healthy, Diaz still flashes the potential that has made him a Top-100 prospect in the past. My guess is that he will make most Top-100 lists if he has a strong finish to the year, though I would not be surprised if he slides down most rankings.

Nate: Rutschman is easily the Orioles best prospect and has shown up on both Keith Law and Baseball America’s mid-season prospect lists (Keith Law had him at #7), so barring a serious injury, he should be on all pre-season top 100 prospects lists. D.L. Hall was a fixture on the pre-season lists and he’s done enough to stay there, though his walk rate could bump him down some lists (he ranked #35 on Law’s mid-season top 50). Yusniel Diaz and Ryan Mountcastle haven’t really moved the needle much for me personally. I think in both of their cases, their ranking is going to depend on how much evaluators believe in their bat, because of questions about what position they’ll end up playing. I guess in Mountcastle’s case, the positional question has been largely settled as he slid all the way down the defensive spectrum to first base, so evaluators will really need to like the bat to put him on a top 100 list. For Diaz, if evaluators think he can stay in CF, he’ll make their top 100, but if they think he needs to move to a corner, he may not make the cut. Grayson Rodriguez has been impressive so far this year and I think he should find his way on to pre-season top 100 lists as well.

Roughly a year after it took place, how do you feel about the Orioles’ return in the Manny Machado trade?

Nate: Has everyone on the Orioles side been injured at some point this year? It kind of feels like it. Despite that, I think the Orioles did well at the time of this trade and my perception of the trade hasn’t really changed after a year, especially when factoring in how much leverage the Orioles had when they traded Machado (i.e. not much). Diaz was the headliner, and other than injuries, I think his year is going pretty well (136 wRC+) at AA. If you were hoping that he’d be knocking on the door to the big leagues by now, you’re likely disappointed, but I think his season has been fine so far. After starting the season on the shelf, Dean Kremer has been really good in 68 innings at AA. Rylan Bannon has cooled off a bit since a hot start to the season, but he’s still hit well at AA and appears like he could have a future as a big league utility man. Zach Pop was pitching well at AA (extreme small sample) before needing Tommy John surgery and the Orioles turned Breyvic Valera into cash. All in all, it looks like the Orioles have 4 potential major league contributors out of the 5 players they received (assuming Pop comes back just fine from TJ surgery), with the 5th player turned into money. It’s almost certain that none of those 4 players will be superstars, but if all 4 contribute at the major league level in some fashion, I think that’s a win. That outcome looks promising now, but a lot can still change.

Zach: This is a mixed bag, I think. Diaz hasn’t taken the big leap forward this season that many were hoping for, especially with him viewed as the biggest piece coming to Baltimore in the deal. Zach Pop’s Tommy John surgery represents a setback, especially since he had shown so much potential as a reliever–both with the Dodgers and over his more limited time with the Orioles–up until his injury. That said, Dean Kremer has been steady throughout his time with the Orioles, and I’m hopeful he can at least develop into a dependable mid-rotation starter. While I don’t envision him as an everyday player, I think that Rylan Bannon’s defensive versatility and power could make him a useful role player at the major-league level. I’m also hopeful that Diaz can put together a strong finish to this season, and make up for lost time with a healthier 2021. For the time being, there are a lot of unanswered questions about this trade, but I’m not at all close to writing it off as a loss for the Orioles.