Should the Orioles trade Mancini? 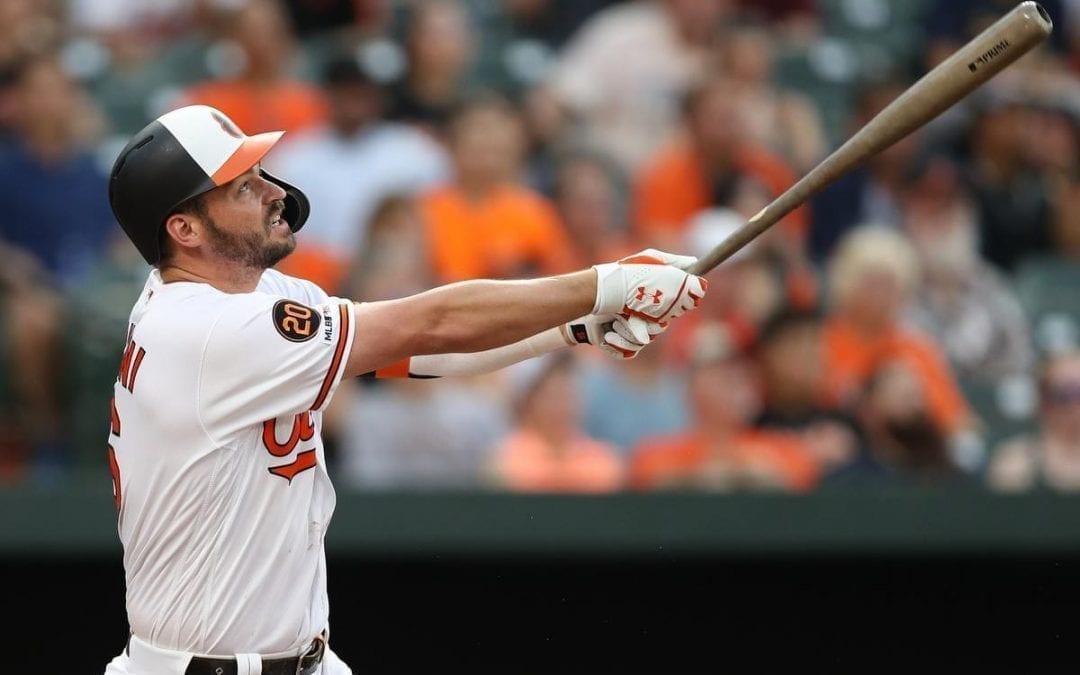 The 2019 season is almost over, which isn’t exactly bad news for Orioles fans. When it’s all said and done, the Orioles will have lost well over 100 games and contention feels several years away. That being said, the 2019 season wasn’t without its positives. Arguably the largest positive, at least on the major league level, has been Trey Mancini. He currently has a slash line of 278/350/517. He has a wRC+ of 124, which is top 30 in the AL. His wOBA of 360 puts him in the top 25 in the AL (both stats amongst those who qualify). His slugging is 21st in the AL and he is 14th in homers. By most measures, he has been one of the 25 best offensive players in the AL this season. He also has seen his BB% go over 9%, which is a career high and his K rate is just over 21%, which is a career low. On top of that, UZR and UZR/150 has liked his play at first. They show him to be a little bit better than average over there. Coming off of a season where he had a 715 OPS, this was an excellent bounce back season.

(You can discuss this article on the BSL board here.)

Earlier in the season, his name came up in trade talks and Mike Elias talked about how the Orioles weren’t looking to trade him. He has never ruled it out but he has seemingly also not been overly active in looking to deal him either. Of course, we don’t really know what is going on behind closed doors and perhaps he did shop him and just didn’t get the offer he wanted. I would have to think his value will be higher this offseason than it was at the deadline. Teams could have been skeptical of him and wanted to see how he ended the year. Well, he has ended it very well and been pretty consistent all season. His OPS in the first half of the year was 868. In the second half, it has been 867. His wOBA and wRC+ are also off by 1 point (higher in second half for both stats).

This offseason will be his first year of arbitration. He will likely see his salary go into the range of 4 million or so. According to fWAR and how it is calculated, he has been worth 20M so far this year, with that being brought down partly because of poor defensive stats in the OF. He likely won’t play in the OF anymore unless it’s in a pinch, so it’s possible his WAR numbers increase, assuming his offense stays closer to the level it has been this season.

With all of that as a backdrop, the question is, why should they trade him? He is on the right side of 30, is still cheap (even with his salary jumping up this offseason), has seemingly settled in at first base, is viewed as the current face of the franchise and he has embraced this season and all that has come with it thus far. He also is on pace to play 150+ games for the 2nd time in his 3-year career and the year he didn’t, he played 147 games. He has been everything you want your best player to be. For me, all of that is great to see but I would look to move him this offseason for many reasons.

While he is on the right side of 30, he also turned the magical age of 27 before the season started. That still remains the peak age in baseball, at least historically speaking. Obviously, guys can have monster years well beyond 30 but this is still the peak age. Combine that with the idea that he had a 715 OPS last year, and an 826 OPS in 2017. His career MiL OPS was also 826. So, it is likely in my opinion that this will be his best offensive season. That doesn’t mean he won’t be good going forward, just that an 850+ OPS season isn’t likely IMO. I also personally don’t view him as a guy I would want to extend. I think he’s a good player that has a really good idea of what he is doing at the plate but I don’t view him as ever being more than a 2.5ish WAR player and I don’t want to sign him for 4+ years, taking him into his 30s, to give us that kind of production at best. On top of all of that, the Orioles have Ryan Mountcastle ready to come up. I view Mountcastle in a similar way I do Mancini. The difference is Mountcastle is 5 years younger and will make about 1.75M combined for the next 3 years. And yes, it is true that we can have both on the team and that wouldn’t be a bad thing but the Orioles have other guys they like that can DH and play in the corner OF positions.

The question is, what would you expect to get for him in trade? For me, I have talked about getting something along the lines of the equivalent to a Yusniel Diaz/Mountcastle level talent and a guy like Baumann (to give you an Os example). In other words, a prospect that would be ranked in the 70-100 range and another organizational top 10ish prospect. I am also open to deals where we can get lower level, high upside prospects. Last year, I had wanted May and Lux in a Machado deal. At the time, neither was a Top 100 prospect. I also wanted Deivi Garcia in a Britton deal. So, if you have earmarked a few guys like that, I am all for taking those players. With age and salary on his side, several teams could be after him this offseason. His slugging% is currently better than all but 4 teams in terms of what they are getting from first base. His wOBA and wRC+ would put him around 7th amongst those teams. Obviously, not every one of those teams would go after him but it gives you an idea of how good his offensive season has been this year.

As always, the caveat to this is that you only trade him if you get a good offer. You don’t just give him away. You can still hold onto him and keep shopping him or just keep him for at least 3 more seasons. He certainly is the type of guy you like to have on your team for all the reasons I laid out previously. I just happen to believe in the idea of trading a guy 1 year early as opposed to one year too late and I feel that if we hold onto him, we will continue to see him be a good player but one that isn’t worth what he should be worth this offseason.