JJ Hardy has been a positive asset for the Baltimore Orioles since joining them via trade (Thanks Twins). The defense has been plus, and he has filled the void at SS while players such as Manny Machado were not nearly ready for the show. Before I get too far, let me say that this article has nothing to do with trading, valuing, or figuring out what the Orioles should do with him. I am strictly analyzing his 2012 season and piecing together a few aspects that I found to be interesting.

In order to analyze his season, we first need to understand what type of hitter Hardy is. The question is fairly obvious honestly, as anyone whom watched him at any point of his career would say he is a “dead pull hitter”. Of course he is, that is why the spray chart below looks like THAT.

When looking at Hardy’s spray chart, your eyes begin to bleed from all the red dots at 3B. I imagine that most dead pull hitters have a similar chart compared to this, but it is still startling. I tallied his hits from the past six years of his MLB career. They are not surprising in the least bit. 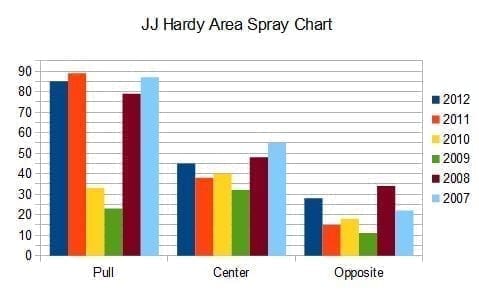 Those numbers are, once again, not very surprising. One of the main points as to why I think Hardy is so pull-happy is because he often is out front. While that seems like such an obvious reason, it has plenty of ramifications.

1. When a player is out front, they are not squaring up on the ball. This might cause a weak ground ball, or a weak fly-out.

2. When the hips fly open, they may “step out of the bucket”.

While I do not think Hardy is terrible with plate discipline and pitch recognition, I do not think he is great (relative to a MLB caliber hitter). These are some of the reasons why I think he has been so predominately pull-happy during his career. It is probably the reason why the Slider and Two-Seam Fastball are the top pitches thrown to Hardy each year, besides the Four-Seam Fastball obviously.

However, I found some other interesting factors in the 2012 season for Hardy. Take a look at these called strike charts from 2011 and 2012. Besides having roughly 150 more plate appearances in 2012, they are both fairly similar.

So that does not really tell us much as to why Hardy had such less success in 2012 compared to 2011. However, his line drive % might give us a little better indication.

While it does not seem like a huge difference, that 1.1% is enough to raise an eyebrow. This gets especially interesting when considering his career LD% is 18.9, a 1.7% difference. I think most would agree that a player is probably going to produce less when not hitting as many line drives. The other interesting aspect of this is that he actually hit more line drives to right field in 2012. I actually tracked this throughout the entire season, as it became obvious that Hardy had shifted his approach a little bit in the second half. Take a look at the spray chart below:

I sense that some of his regression in 2012 was also due to the 20 point difference in BABIP. At the end of the day, Hardy still has some potential value with the bat at SS. He might very well be a one-trick pony, as he still is primarily a pull hitter. But there are small shifts in his game that make it interesting. Did hitting second cause his regression? It is certainly possible. It may just have been luck that caused him to be worse at the plate in 2012. One could argue the same for 2011.

Overall, Hardy provides more value than negatives in my eyes. Now if only they moved him out of the two hole…

Tucker Blair was born and raised in the Baltimore area and currently lives in Elkridge, Maryland. He graduated from York College of Pennsylvania with a B.S in Entrepreneurial Studies and is currently a Project Analyst for a Management Consulting Firm in Federal Hill, Baltimore. Tucker was previously the Managing Editor at Orioles Nation, where he worked on prospect lists, reports, and analysis on the Orioles minor league system. He also previously wrote his personal blog, The EntreprenOriole.