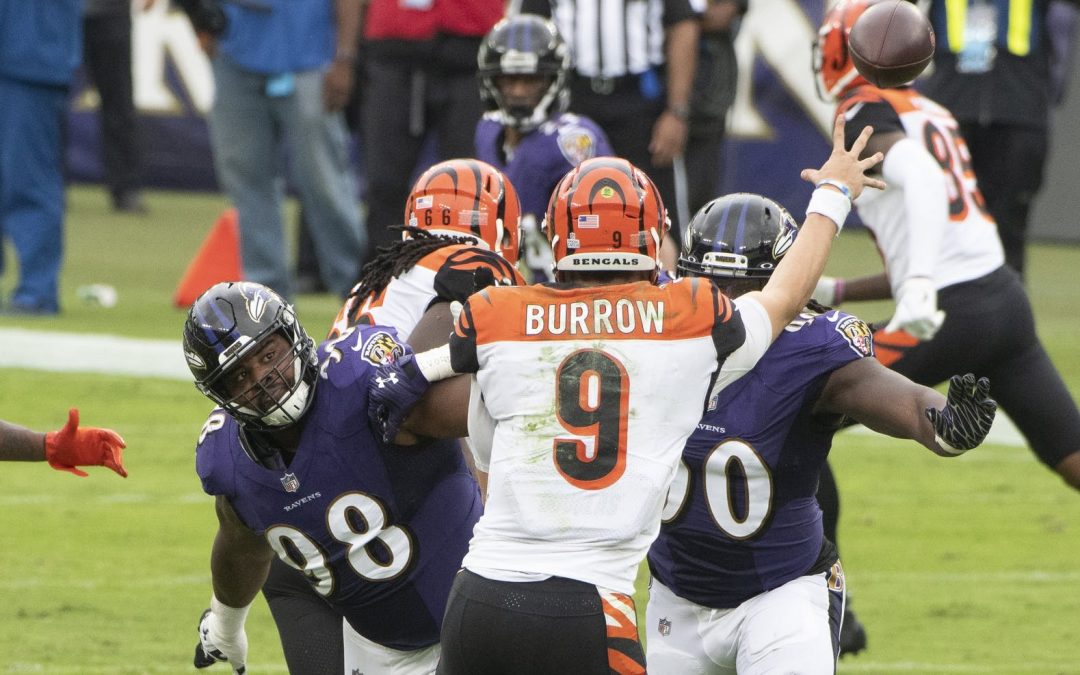 Discuss your thoughts on these topics form the Ravens 27-3 win on our message board.

For all intents and purposes, defense pitched a shutout.

The pass rush had left a lot to be desired up until this week. The eye test showed it. The advanced metrics on pressures showed it. But the Ravens got to Joe Burrow for seven sacks, and pressured him a lot more than that. They also forced two fumbles, including Patrick Queen strip sacking his old pal from the LSU championship team, and ended the day with one more touchdown responsible for than his buddy too.

The bad news from this is that the Ravens secondary accounted for five of the seven sacks. A lot of all out blitzing that the Bengals shoddy O-line couldn’t handle. Plus a rookie quarterback who couldn’t recognize all the fronts the Ravens threw out there. Not something you’ll be able to continue to do as better, more experienced quarterbacks won’t give you that luxury. But hey. It worked today, led to a win, and a win is a win and you don’t have to justify how you got it.

The Ravens have a history of feasting on rookie quarterbacks, and this game was no different. Being the first overall pick didn’t matter. The Ravens defense hit Burrow 15 times. His jersey was already dirty in the first quarter. I was a little skeptical about this game given that Burrow hasn’t looked bad in the early going in 2020. The Ravens, and no team for that matter having a home field advantage. Burrow got nothing going. QBR of 5.5 on the day when 50 is average.

From the 9:27 mark in the first quarter to the 4:52 mark in the 4th quarter, the Bengals didn’t operate in Ravens territory at all.

Division games can’t be overlooked. Take a look at what the Raiders did to the Chiefs today. Weird things can happen in division games, but the Ravens didn’t allow it to here.

Are the Ravens trying to be too cute?

I made a note that at the 9-minute mark of the 3rd quarter, Lamar Jackson had attempted 35 passes. Baltimore had been leading from the outset and were up 17-0 for a while at that point. On pace for almost 60 passes at that point? Why?

I understand Lamar Jackson was limited at practice this week. Missed two of them. He’s been the Ravens bell cow ball carrier and maybe something is bothering him this week so instead of taking the carries he would have, he turned those into passes.

Look, the Devin Duvernay end around in the first quarter that went for 42 yards was nice. But I feel like after that they felt like they needed some more atypical plays. There was too long stretch in this game where they weren’t just going to their bread and butter they did a year ago when they set team rushing records that hadn’t been matched since the 1970s.

Worth noting from that 9-minute mark in the 3rd quarter until the end of the game, Lamar Jackson only attempted two more passes. When the Ravens got back to the ground game on the ensuing drive they went four rushes for 40 yards to start the drive.

This has been a staple. When the opponent knows they are going to run the ball given the game situation, the Ravens pound it for a ton of yards. What would happen if they committed to it in the first half where the game script isn’t decided yet? This brings me to my third thought…

J.K. Dobbins is STRONG, and it’s time to give him the load.

He was a beast on his ONE, ONE, carry on the day where he beat defenders to the edge, then broke tackles and shoved guys over to gain 34 yards, on his ONE carry. When you have a rookie like this, a guy with fresh legs, why can’t you let him get more than ONE carry?

He rushed ONE time in the Chiefs game for six yards. Even with that if you take his longest run from each of the five games played now, he would five rushes for 110 yards. 22 YPC. Other than that, it’s 11 carries for 16 yards. It’s a small sample size because the Ravens are making it one. The truth often lies in the middle of such extremes.

Dobbins averages 6.1 yards per carry and can’t seem to earn more touches. Why?

Lamar Jackson doesn’t have to prove he can throw the ball. The Ravens don’t have to prove they can be the smartest team in the league. In fact, not running it as much as they should be is proving that they aren’t, and I realize that is harsh criticism when they are 4-1 and just won 27-3 in a division game against an opponent with some upside. We just expect them to get the ball in their best players hands. Lamar is that, but Dobbins is shaping up to be one of the next on the list. Also consider that Marquise Brown was targeted 10 times, Mark Andrews 9 times, and the next most in the passing game was Dobbins, only 3 times, and he caught all three of them for 21 yards.

No reason to entertain Miles Boykin or Willie Snead anymore. Run the ball with your three talented backs and set up the passing game with Andrews and Hollywood.

Is the AFC North tough?

The Steelers continue to hold the division lead at 4-0. Cleveland has won four straight games after an opening week loss to the Ravens. The Bengals have Joe Burrow, who until today, was had thrown for 300 yards in every game to date, first time a rookie quarterback had started his career with four such games.

I can guarantee that the pundits this week are going to salivate over this division given the top three teams are 12-2.

We’ll get a better picture of the AFC north over the next few weeks. Next week the Steelers and Browns hook up. The Bengals will try to rebound against the Colts who just lost to said Browns. The Ravens get the Eagles who surprised the 49ers a week ago and gave the Steelers all they could handle today. The Ravens then go on a bye and then get a shot at the Steelers. Possible they are undefeated when that game comes around.

If you look at point differential, the Ravens are a league best +73 (as of Sunday night, 10/11). Steelers +31, Browns +7, Bengals -24. Ravens have allowed a league best 76 points, not counting the 74 the Titans have allowed in two less games played because they can’t abide by COVID rules and are dangerously close to ruining this season for everyone.

If the Titans forfeit some games for being idiots, which would go in the books as a 1-0 final score, would they get credit for allowing the least amount of points in a season? I digress.

Look ahead to the Eagles.

Let’s hope the Eagles had their Super Bowl in the intrastate rivalry game against the Steelers. They played super conservative when they ended in a tie with the Bengals that the Ravens just dispatched of with ease. They weren’t even that impressive in their win against the 49ers where they needed a defensive TD to take the lead and still tried their best to give the game away late. They came back strong and held the lead in a high scoring affair in Pittsburgh before ultimately losing that game to end up 1-3-1 heading into the Ravens contest.

Remember when Carson Wentz flirted with MVP consideration before his season ended prematurely due to injury, and Nick Foles led Philly to the Super Bowl? Long time ago, right? Seems like it anyway. Foles is long gone and Wentz leads the league in interceptions with 8, meanwhile the Ravens defense has earned a takeaway in a league best 18 straight games.

Miles Sanders had a 74-yard tote for a score in this game today. Something called Travis Fulgham had 10 catches for 152 yards and a touchdown? Expect some regression next week from this Eagles team. Other than the long run, Miles Sanders ran 10 times for 6 yards. They will likely get DeSean Jackson back from injury, but it won’t be enough.

I don’t expect the Vegas line to be 12 to 14+ like it has been the last two weeks. Maybe closer to 7.5 with the hook, 8 to entice people to take Eagles perhaps? But this is another game the Ravens should handle their business by two scores minimum. Don’t get caught looking ahead to bye week vacation plans and the Steelers coming up after that.