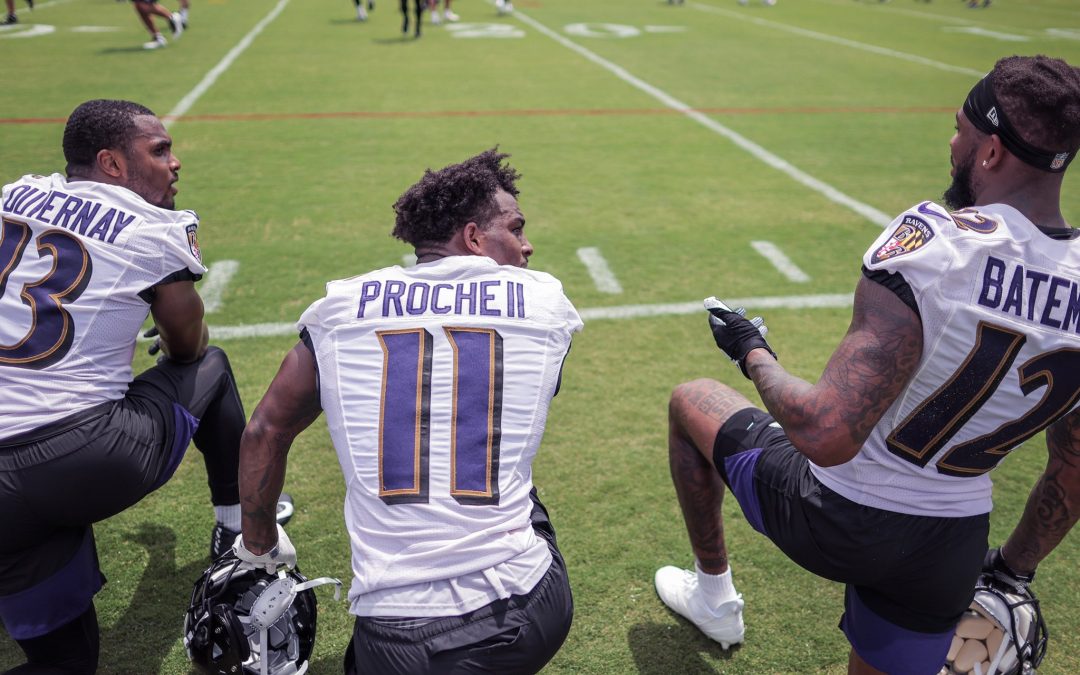 It is a position group under the microscope given that the Ravens had the least amount of passing yards in 2020. They had the most rushing yards, and finished seventh in scoring. But some just get hung up on airing the ball out.

Mind you, this wasn’t an issue when the Ravens were 27th in passing yards per game and Lamar Jackson won league MVP in 2019. But now that they went from 27th to 32nd, it’s seemingly the biggest deal. [rolls eyes]

The stat I care about most is the W. If they decide that the Navy Triple Option is the best scheme for this offenses skill set, and win the AFC North and a first round playoff bye for doing so, then so be it.

As much I’d like to see one game where they run the ball 70 times for 500 yards just because they can, they won’t do that. So here is a look at the Ravens wideout group as it stands today. A group that will look quite different from the 2020 group.

Rashod Bateman, like most first round picks, will have lofty expectations when he steps onto the field for the Ravens. Bateman brings a skill set that the Ravens definitely need as a crisp route runner whose timing with Lamar Jackson should be on point. He can win one-on-one on the outside, evident by his stellar 55% contested catch rate while at Minnesota. Bateman also can create massive separation on in-breaking routes that could lead to plenty of yards after catch. He has a basketball background which has proven to translate to football field. Plays physical with 36 broken tackles in his last season at Minnesota. There is a lot to like here, but with all rookies, it’s a giant question mark until they get on the field in games that matter.

I suspect Bateman will see around 75 targets if he plays a full season. It is an offense that primarily runs the ball, Jackson will like to continue to lean on Mark Andrews, Marquise Brown will get his share, and J.K. Dobbins emerging as a threat anytime he has the ball in his hands could earn some more targets if he cleans up some of the drops. Bateman likely won’t, and shouldn’t have to do what Justin Jefferson did last year (125 targets, 88 catches, 1400 yards, seven TDs) in order to have a successful rookie season.

Tylan Wallace will likely serve as the 4th or 5th WR option in his rookie campaign but carries a similar skillset to Bateman. As a veteran on the Oklahoma State roster, the Ravens 4th round selection ranked first in college football since 2017 in contested catches (46) and catches of over 20 yards (40). Wallace led the nation in receiving yards (1,489) in 2018, then had 2019 cut short when he tore an ACL. He recovered just fine, being productive in 2020. Without the injury, maybe Wallace goes much earlier than round four.

With only one ball to go around, and if you don’t factor in injuries, I feel like Wallace would be lucky to see 25 targets.

Marquise “Hollywood” Brown made waves last season when he tweeted after a Ravens loss about basically not getting the ball thrown his way enough. The tweet was quickly pulled, not much more was said about it, but every time he dropped a ball from then on, fans let him know about it.
It’s pretty apparent after two seasons that Hollywood isn’t a fit as a team’s number one receiver, or “X” if you will. That’s okay. The X is expected to win against a CB on their own with a variety of skills. But at 5’9”, Brown poses as a mismatch at times against bigger DBs, and certainly when going over the middle where spying linebackers are licking their chops. Drafting Bateman who is more a fit as the X, opens Brown up to being able to maximize his talents as a deep threat. Of his 1,353 career yards, about exactly half (675) have come on throws traveling over 20 yards.

Bateman figures to eat into Brown’s target share (100 targets last year), but Brown might be more efficient in his targets in 2021. Passer rating in Brown’s direction was 129.8 in 2019, but dropped to 100.0 in 2020. Wouldn’t be surprised to see Brown and Bateman see similar target share, call it 75.

Miles Boykin is a player that hasn’t shown much as a receiver in his time here. He doesn’t use his 6’4” frame for winning 50-50 balls. He doesn’t have great timing with Lamar Jackson as at least two interceptions that I can recall last season were throws where Jackson expected Boykin to be in one place when he threw a pass, but Boykin broke off his route a few yards past the mark and was nowhere near the ball in flight. Good news is that those mistakes can be fixed. Attention to detail can be taught. It’s not like he has frying pan hands that there isn’t a cure for since Stickum was banned. Better chemistry, which could be aided by the new leaders in the wide receiver room in Tee Martin (WR coach) and Keith Williams (Pass game specialist) could lead to a better season for Boykin.

Boykin does excel as a run blocker and the Ravens don’t want you to forget that. Writers on the team site often bring up that part of his game, leading me to believe his spot is safe on this team. I don’t think we much of an uptick in his targets. Had 33 last year, 35 seems about right. Same number Seth Roberts had as a run blocking WR in the 2019 Ravens offense.

It feels like over a decade ago that Sammy Watkins came highly regarded out of Clemson and was traded up for by Buffalo to draft in the top 5. He never really lived up to that billing, but also will only be turning 28 in a few days. Feels like forever, but there is still plenty of gas in this tank. Watkins spent the last three years in the prolific Chiefs offense fighting for targets with All-Pros Tyreek Hill and Travis Kelce.

Watkins hasn’t played all 16 games in a season since his rookie year in 2014. He’s missed six, two, then six more games in his three seasons in KC. When he is on the field, he’s asked to do the dirty work as his average depth per target has been 9.3, 10.5, then only 8.1 yards last season. If used in the same way, Watkins and Mark Andrews might be your chain movers, while Bateman and Brown are your playmakers. Watkins likely steps into the role vacated by Willie Snead, and his target share could be about the same, with Snead getting 48 looks last season. Watkins was targeted more in Kansas City, but Baltimore throws it less. Round up to 50 targets.

Devin Duvernay enters his second season. He only caught 20 balls as a rookie but solidified himself into the kick returner’s role. Given Watkins injury history, Duvernay could be called upon for a bigger role at any moment. Again though, only one ball to go around, and the Ravens added two receivers assuredly above him in the pecking order, with where Wallace fits in yet to be seen. 20 targets might be his ceiling once again.

On the bubble: James Proche

Will the Ravens carry six wide receivers, or seven? Seems to be a question every year when cutting the roster down to 53. Going to end up being a matter of who the best 53 players are and if Proche is one of them. Special teams play will factor into that decision. If all six WRs break camp healthy, the decision becomes that much harder. For now, I think Proche is the odd man out given that the Ravens roster looks like a deep one, full of tough decisions to get down to 53 guys. It’s a good problem to have. With their propensity for running the ball, I think six WRs is it, with perhaps an extra tight end, offensive lineman, or running back kept on board.

Deon Cain played 13 games between the Colts and Steelers in 2019, amassing 9 catches for 124 yards. In 2020 he only dressed for two games for the Steelers with no stats recorded.

Jaylon Moore spent all of 2020 on the Ravens practice squad.

Binjimen Victor spent all of 2020 on the Giants practice squad.

Devin Gray has spent three seasons on the Falcons practice squad, only getting the call to the active roster for their 2020, week 17 game against the Buccaneers. He did not get on the field and was sent back to the practice squad.