How Talent On Hand Can Help Orioles Rebound In 2018 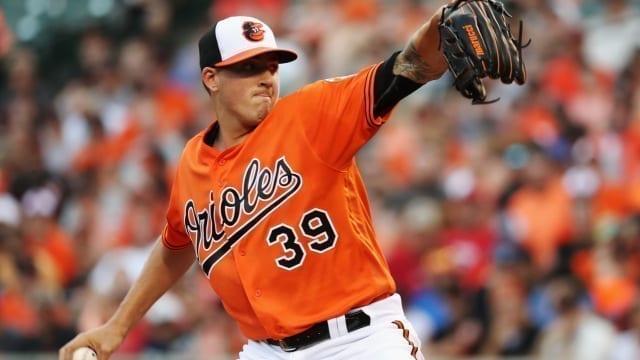 Of all the topics surrounding the Baltimore Orioles this offseason, the biggest and most persistent has been the question of whether they should dynamite the whole operation or take another shot at contending in 2018.

It’s an obvious dilemma considering this team is at a cross-roads — a consistent playoff contender that fell to a fifth-place finish last season … with multiple stars approaching free agency … with multiple rotation holes and too-few dollars with which to fill them.

I’ve admittedly taken up residence on both sides of the fence on this issue. I’ve presented ideas for steps they could take toward contending, and I’ve also outlined how the Astros present a potential blueprint for a scorched-Earth rebuild. It seems that many, and perhaps most, professional observers outside the organization think they should look to start over.

But for this piece we’re going to go back onto the grass-is-greener side of the fence and take a positive perspective. (Again, this is why this debate is so persistent this winter – there are legitimate arguments to be made for both sides).

For all the negative things that happened last season, this team still had an outside shot at a wild card spot in September. As much as the starting pitching struggled, as much as Zach Britton’s injury upset the bullpen apple cart and as disappointing as the offense was, there is still a lot to like about this roster. Reasonable people could make a case for a rebound in 2018 based on two conditions:

* That general manager Dan Duquette finds adequate, cost-effective replacements for departing gasoline cans Ubaldo Jimenez, Wade Miley and Chris Tillman, and that he does his usual solid job of unearthing overlooked gems that Buck Showalter can find use for in his offense.

* That players already on the roster either rebound from down 2017s or take significant strides toward reaching their potential.

For this exercise, we’ll assume that Duquette does his part and look at the second issue. Here are some things that players already on the roster need to accomplish in 2018 for the Orioles to once again be contenders.

This one trumps all the others to follow. For one thing, it’s hard to imagine the Orioles contending without big contributions from their two biggest stars, who are also pending free agents. For another, if things go south and Duquette finds himself leaning toward a rebuild, he’s going to need to extract maximum value from these two on the trade market. If they’re struggling like they did for much of last season, the O’s GM will regret not having dealt them away at the height of their value.

This holds especially true for Britton, who turns 30 next month and has already shown signs that his otherworldly 2016 season was a bit of an outlier. And yes, that statement isn’t entirely fair. Britton was a good closer last year with an ERA+ of 151. But when you compare that to his 803 ERA+ of the previous year, it’s tempting to fret over an opportunity lost.

Ideally, these two start the season strong and the Orioles surge to the front of the AL East. But if the Orioles falter despite good play from Machado and Britton, at least they can shop them knowing they can extract maximum value on their way to a rebuild.

Mark Trumbo has to get back to his career averages

Trumbo’s struggles last season have been well-documented. He had his lowest OPS (.686) since his cup-of-coffee rookie season of 2010 and a stunning drop in slugging (from .533 to .397) from his 47-homer performance of 2016. He was even worse against right-handers, putting up a .658 OPS and striking out in 26 percent of his plate appearances.

When you combine his offensive woes with his defensive deficiencies, you’re looking at a high-priced, soon-to-be-32-year-old with a virtually untradeable contract. The Orioles simply can’t afford that.

Odds are slim that Trumbo will approach his 2016 season, a year in which he surpassed his career numbers across the board. But if he can approach those averages (.249/.301/.461) and pop 30 homers and, say, 25-30 doubles, the Orioles’ offense will have an entirely different look in 2017.

Schoop’s development has been a joy to watch, as he has grown from a free-swinging youngster with budding power to a legitimate No. 3 hitter who approaches the plate with a plan and knows how to work a count.

Schoop will still strike out a bunch – he whiffed a career-high 142 times last season – but he’s no longer guaranteed to chase the low-and-outside breaking ball even when he has two strikes. Watching him closely, it was clear his pitch recognition was much improved and he had a better idea of what pitchers were trying to do to him.

The numbers bear that out. Schoop had seven more at-bats in 2017 over the previous season, and yet he saw 313 more pitches. That combination of patience (career-best 35 walks and .338 OBP) and selective aggression (36.1 percent hard-hit rate, .841 OPS) made him an All-Star for the first time. Even more encouraging is the fact that his numbers dipped only slightly in the second half, showing that while pitchers adjusted to his new approach, Schoop adjusted right back. There is no reason to think he can’t continue to develop into a complete hitter.

Kevin Gausman has to take the next step

The Orioles have a pretty good idea now what they have in Dylan Bundy – a solid, reliable workhorse. But he doesn’t appear to be an ace, and when you consider Duquette is unlikely to add an ace via trade or free agency this winter, it’s up to Gausman to at least show signs he will one day become one.

There is plenty to like about Gausman. His arm is electric, and his fastball and change/splitter both can be dominant pitches at times. He also seems to have a way of figuring things out as he goes. After a disastrous first half last season, he was actually solid in the second – a pattern that loosely followed his 2016 season.

But he needs to finally settle on a third pitch – curveball or slider? – and develop it into an effective weapon. Gausman switched from a curve to a slider for last season and that results were so bad that all of his offerings were getting crushed. The good news is that the slider improved as the season went on and opponents slugged just .250 against it in the final month of the season.

It was no surprise when Welington Castillo declined his option for 2018 and chose free agency, for all practical purposes ending a brief but successful run in Baltimore. So unless Duquette goes catcher shopping this winter, the reins will be handed over to Caleb Joseph and Chance Sisco.

Joseph is a solid player and improved offensively last season, putting up career numbers across the board and hitting eight home runs in 89 games. He’s also worked hard to improve his defense and ranked 10th in MLB last season in pitch framing. But he’s not going to remind anybody of a young Matt Weiters, and at age 31, expectations of improvement in his game should remain conservative.

Sisco is another story. Long considered one of the few jewels in a struggling farm system, Sisco broke into the majors late last season and hit .333/.455/.778 in a 10-game sample, a big league debut similar to the one made by Trey Mancini a year earlier.

Sisco, who turns 23 in February, has always been a hit-first catcher. He hasn’t been particularly good at pitch framing and threw out just 23 percent of base stealers in the minors last season. But he has shown improvement in those areas. Will it be enough?

It might be prudent to give him some more time at Triple-A to start the season, but I’m not sure what great benefit that would be at this point. I’d rather see him in Baltimore sharing time with Joseph, working with John Russell on his defensive technique on a daily basis, getting to know his pitching staff – and all under Showalter’s watchful eye.

We already know he can hit. It’s time to see if Sisco can become the whole package.