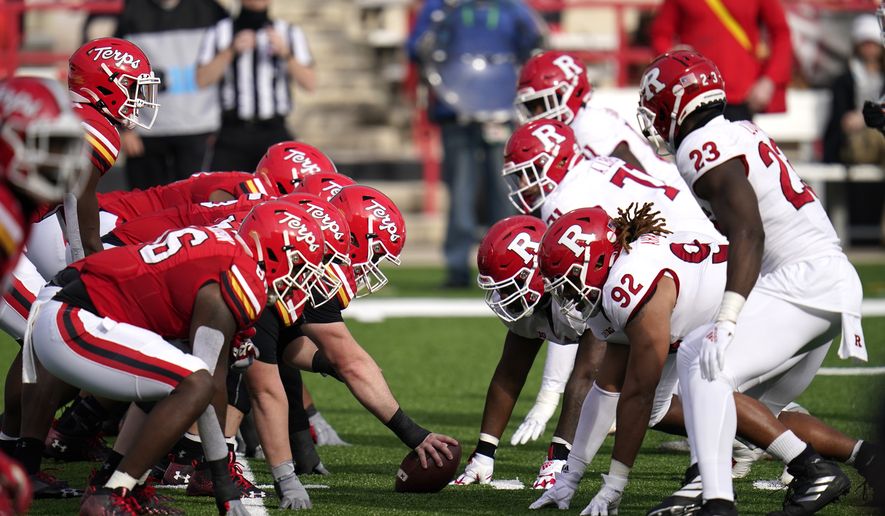 Ever since Maryland joined the Big Ten Conference, one of their most glaring talent deficiencies has been along their offensive line. Against the conference’s elite interior defenders, the Terrapins’ offensive guards and centers have typically been unable to establish a consistent rushing attack. While there are some questions at the position this season, the team is hopeful that they’ve found a group of starters capable of creating holes for their running backs and protecting against interior pass rushes.

Who starts at center?
With Austin Fontaine struggling to get his weight up to competitive level, the team was forced to try a few different players at the center position during spring practices. But since they’d prefer Johari Branch and Spencer Anderson to play their more natural positions of guard and tackle respectively, the coaching staff added Aric Harris from the junior college ranks.

How good is Lunsford?
There was significant hype surrounding Mason Lunsford’s performance during spring practices with many saying he was not only the most improved offensive lineman on the roster, but the best lineman overall.

Will Harris be ready to win a starting job?
Harris won’t have much time to acclimate himself after transferring from the junior college ranks but with the team relatively unhappy with the players behind Branch and Anderson at guard and tackle, winning the starting center job would be big for the offensive line as a whole.

Braswell enters his first season as Maryland’s offensive line coach after Locksley moved on from John Reagan after two years on the coaching staff. Braswell served as a volunteer analyst with the team last season and made a very positive impression on both Locksley and the players. He brings five years of NFL coaching experience with him to College Park and played college football at Hampton University, which may open some recruiting access to Virginia’s coveted Tidewater area.

Lunsford came to College Park as a member of head coach Michael Locksley’s first recruiting class before the 2019 season and has appeared in five games during his collegiate career thus far. He received his first start at right guard in the team’s season finale against Rutgers last year.

I’ve projected Lunsford to serve as the team’s starting left guard in 2021. He’s been extremely impressive to the coaching staff during the off-season, and has all but locked up a starting job.

Harris was a late addition to Maryland’s roster after transferring from the junior college ranks in May. He played in Hutchinson Community College’s spring season, helping the Blue Dragons to win the NJCAA National Championship over Snow College.

I’ve projected Harris to serve as the team’s starting center in 2021. The team is hopeful that he can win the job despite his late arrival to campus, which would allow Anderson to remain at right tackle.

Branch started at left guard in all five of Maryland’s games last season after transferring from the junior college ranks. He was an important piece to the offensive line, which was forced to replace a number of interior offensive linemen before the year began.

I’ve projected Branch to serve as the team’s starting right guard in 2021. The coaching staff tried him out at center during spring camp but he had some trouble snapping the ball consistently, so he’s moved back to guard full-time.

Gregory received his first game action of his collegiate career in 2020, including his first start in the team’s game against Indiana. He was a very highly-regarded recruit when he arrived on campus in 2019, but has yet to break through and win a starting job.

I’ve projected Gregory to serve as the team’s second-string left guard in 2021. While he was expected to compete for a starting job, Lunsford’s surge made that very unlikely.

After initially opting out of the 2020 season, Fontaine joined the team late and played in only the season finale against Rutgers. Making the transition from the defensive side of the ball before the 2019 season, he played well enough to solidify himself as a starter on the offensive line moving forward. However due to massive weight loss during the offseason, he’s been unable to claim a starting job that would’ve been his for the taking.

I’ve projected Fontaine to serve as the team’s second-string center in 2021. If he’s able to get his weight up enough during the summer and fall, he may be able to compete for the starting job later in the season. For now though, he’ll be relegated to a backup role.

Finger has appeared in just one game during his first two years in College Park after joining the team as a 3-star recruit from the state of Florida in Locksley’s first recruiting class as Maryland’s head coach. I’ve projected him to serve as the team’s second-string right guard in 2021.

Perkins was one of a handful of offensive line recruits in Maryland’s 2020 recruiting class, joining the team as a 3-star recruit from the state of Florida. He didn’t see the field at all last season. I’ve projected him to serve as the team’s third-string left guard in 2021.

Gorgas joined the team as a walk-on before last season after playing his high school football at the prestigious IMG Academy in Bradenton, FL. He didn’t see the field at all last season. I’ve projected him to serve as the team’s third-string center in 2021, but if Fontaine continues to struggle with his weight he could move into the second-string role.

Green was another one of the offensive linemen in Maryland’s 2020 recruiting class, and saw the field in two games during his true freshman season. The coaching staff was consistently impressed with him, and his versatility. I’ve projected him to serve as the team’s third-string right guard in 2021, but he’ll likely challenge Finger for the second-string job during the summer.

Armentrout joined the team as a walk-on before last season after playing his high school football at C. Milton Wright High School in Bel Air, MD. He didn’t see the field at all in 2020. I’ve projected him to serve as the team’s fourth-string center in 2021.

Love joined the team last season as a 3-star recruit from the state of Florida, and didn’t see the field in any of Maryland’s games. I’ve projected him to serve as the team’s fourth-string right guard in 2021.