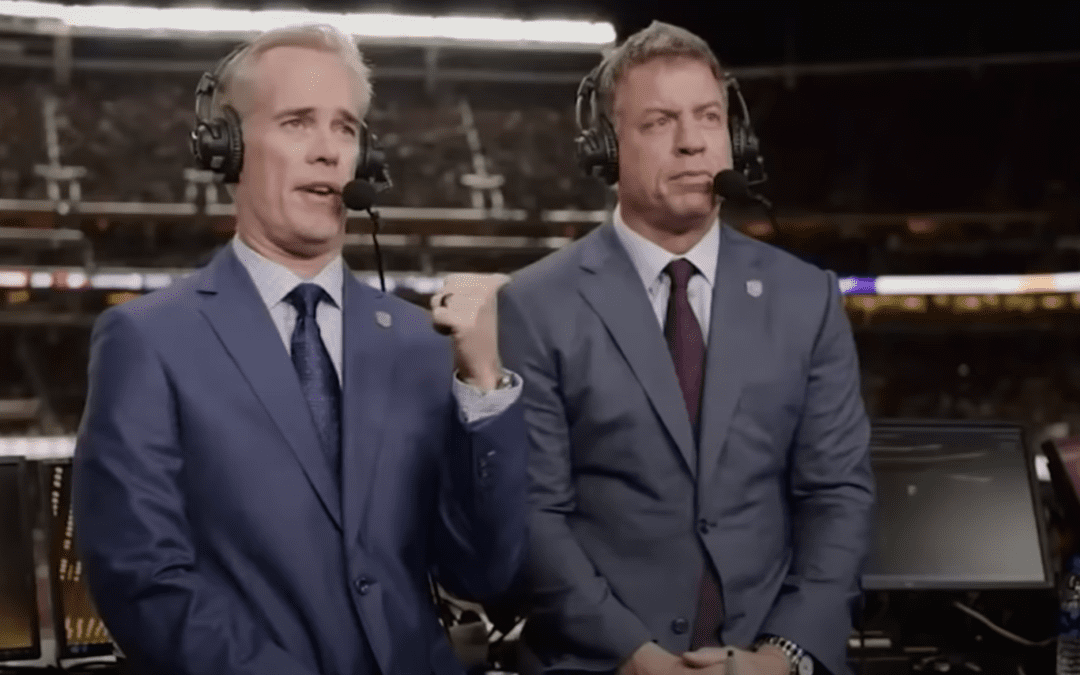 Over the last month or so, despite the season coming to an end, the NFL has been a popular subject in sports media circles. This might seem surprising, with the NBA and NHL in full swing and March Madness on the horizon, but the reason for the NFL’s media superiority is a simple one: a whole lot of broadcasters are switching networks.

But while this broadcasting carousel is surprising, the changes of employer we’ve seen this year have been a long time coming.

It all goes back to 2016. This was the year where Mike Tirico left ESPN for NBC Sports, which would set NBC’s succession plan into motion and would also throw Monday Night Football into a state of flux.

To replace Tirico, ESPN simply elevated Sean McDonough to the MNF play by play role alongside Jon Gruden, a pairing that never really got off the ground. Meanwhile, Tirico, waiting in the wings to succeed Al Michaels, called select Thursday Night games and hosted in the studio, while adding Notre Dame play by play to his schedule in 2017.

In 2017, CBS jumped into the fray with their hire of Tony Romo to work with Jim Nantz as the network’s top broadcast team. The move was undoubtedly a gamble, but it worked out as well as anyone could have expected – Romo become a broadcasting star for CBS, raising the bar for all NFL broadcasters.

Fox also made a change near the top in 2017, though it wasn’t necessarily their decision. John Lynch left the broadcasting world to become the GM of the 49ers, vacating the analyst spot next to Kevin Burkhardt. Fox promoted Charles Davis up the ladder to become their #2 analyst.

After the 2017 season, Gruden went back into coaching with the Raiders, and McDonough was shifted back to the college football world. Attempting to replicate the success CBS had with Romo, ESPN hired Jason Witten as an MNF analyst, working with Joe Tessitore and Booger McFarland. Saying that the hiring didn’t go well was an understatement: the three-man booth did not gel at all (especially with McFarland calling games from the sideline “Boogermobile”), and MNF broadcasts were a laughingstock in 2018.

2018 was also the year that Fox took over Thursday Night Football, turning Tirico into a studio host and fill-in play by play broadcaster. Fox’s TNF deal also forced Joe Buck and Troy Aikman to increase their workload, calling two games per week throughout much of the season. Fox was reportedly interested in (who else?) Tirico to call the package

The 2019 season was the least interesting in terms of broadcaster movement. Witten went back to playing in the NFL, leaving the pairing of Tessitore and McFarland in the MNF booth. The reception for that duo was better, but still not positive.

Things truly got wild in 2020. Amid interest from ESPN, Romo re-signed with CBS on a huge contract that would set a new watermark for NFL broadcasters. Months later, CBS also nabbed Davis from Fox to be their #2 analyst, replacing Dan Fouts.

Rebuffed by Romo, ESPN once again scrambled their MNF broadcast booth, with the new trio of Steve Levy, Brian Griese, and Louis Riddick taking over. To replace Davis, Fox promoted Daryl Johnston up the ladder, but only on a temporary basis – Greg Olsen would be poised to join the company when he retired, working alongside Burkhardt. In the same boat, Drew Brees was also leaning towards becoming a broadcaster after retirement, but at NBC.

Then we hit 2021. CBS re-signed Nantz and Ian Eagle, the company’s top two play by play broadcasters, to pair long-term with Romo and Davis, respectively. ESPN opted to bring back their full MNF broadcast crew for the first time since 2017. Olsen retired and joined Fox, working with Burkhardt as the company’s #2 team. Brees retired and joined NBC, working in the Sunday night studio and calling Notre Dame games with Tirico.

2021 was also the year where the NFL announced its new TV deals, which included Amazon taking over exclusivity of the Thursday Night Football package. Without the simulcasts on NBC or Fox, Amazon would need its own broadcasters to call the games. Several names were linked, with Michaels and Aikman emerging as front-runners.

Finally, we reach the present day. Michaels has seemingly called his last Sunday Night Football game, with Tirico in line to take over six years after joining NBC. Aikman pivoted from Amazon to ESPN, who was willing to give him an eye-watering salary close to what Romo is making at CBS (which Fox seemingly felt they couldn’t). Following Aikman out the door, somewhat surprisingly, was long-time broadcast partner Buck, giving ESPN a marquee Monday Night Football broadcast team for the first time since Tirico left the company.

With Aikman out of the picture, Amazon is turning to ESPN’s Kirk Herbstreit as the analyst for its Thursday Night Football package, though he’ll continue his college football commitments with ESPN. Fox, meanwhile, seems prepared to promote Burkhardt and Olsen to their top team, though rumors of Brees and Sean Payton continue to circle.

And that’s where we are today. CBS locked in their top broadcast teams prior to this year’s chaos, and those contracts helped things unfold the way they did, allowing the network to remain mostly unscathed. ESPN is adding a top-tier broadcast team to Monday Night Football, but it’s still a new one to the company. NBC is (likely) changing their Sunday night booth for the first time in more than a decade. Amazon is probably going with a pair of broadcasters that have never worked together.

The only question left is whether or not the carousel is going to stop spinning any time soon, or if we’re just about at the end.