Two Months Remain; How Do The Orioles Compare? 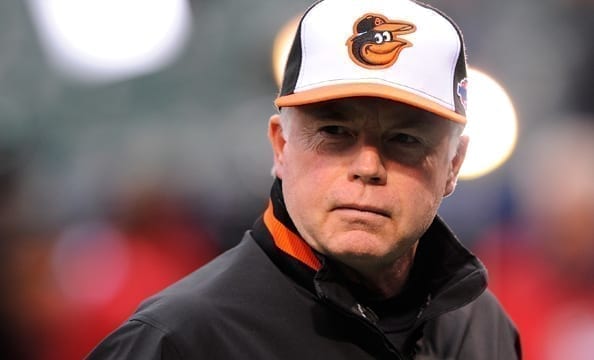 With their 6-2 12 inning win today in Toronto, the Baltimore Orioles enter August with a 1/2 game lead in the American League East. It was a tough week for the Birds, with the O’s riding a 5 game losing streak entering Sunday. Slumps have happened to them before this season and they have found a way to bounce back and get things going. Will that happen again?

With two months remaining in the regular season, how do the Orioles compare with the other best teams in the American League?

(You can discuss this article on the BSL message board here.)

As of today, there are realistically 7 teams in play for the 5 AL playoff spots. With the trading deadline up tomorrow, can any of the teams in this group make big moves to separate themselves? Today, the Indians made the first real big move when they acquired Andrew Miller. Miller gives them a stud reliever at the back of their pen to go with Cody Allen. Cleveland also tried to acquire Jonathon LuCroy and had a deal in place but he wouldn’t waive his NTC to go there. Still, it appears they will continue to look add another bat. All of the other teams involved in the race have been connected to several different players throughout this past week or so. These next 24 hours will be very interesting to see what teams can land the players to help put themselves over the top.

How do the Orioles stack up vs. the other 6 teams that are fighting for these 5 spots? Let’s take a look. First, let’s identify those 6 teams. They are Boston, Toronto, Cleveland, Detroit, Houston and Texas. It doesn’t seem likely Detroit will overtake Cleveland and obviously one of Texas or Houston will win their division, leaving the other for a potential wild spot.

With the teams identified, how does the starting pitching compare? The Indians and Blue Jays have easily the best starting pitching of this group, at least top to bottom. The Indians starters have a 3.68 ERA and the Blue Jays starters boast a 3.72 ERA. The next closest team, the White Sox, is at 4.11.  The next best starters ERA go to the Rangers, with the Astros just behind them. After those teams, there is a pretty wide gap between them and the next best, the Detroit Tigers. Detroit has an ERA that .25 runs higher than Houston and Boston is .21 behind Detroit. And then you get to the O’s, who have a starters ERA of 5.02, which is second worse in the AL. That is almost a run and a half worse than Cleveland. The Orioles also have the worst FIP among the group although they are only .01 worse than Texas and those 2 teams are well behind the rest of this group.   Only the Rangers staff strikes out fewer per 9 innings than the O’s staff does and the Orioles have the worse walk rate, with Texas being the only team close to them in this group. The O’s also have the worst HR/9IP rate. I would say its pretty obvious that the Orioles have the worst starting pitching of this group.

As bad as the starters are, the bullpen helps to make up for it. The Orioles are second in this group in BP ERA. They are .03 behind Houston. These are the 2 top bullpens in the AL according to ERA and the next bullpen isn’t close to them. The O’s pen has the highest WPA in the league and no one is close. Individually, Britton has a 3.72 WPA. The next closest, Andrew Miller, is 2.90. Brach is 12th in WPA, Givens is 20th and O’Day is 25th. Even Bundy is 30th. No team can match that. I still feel the Orioles could use another arm out there, preferably one that gets out lefties. We will see how the workload affects these guys but the Orioles appear to have the best pen in the AL and if you want to say someone else are better, they are certainly right there with them.

Offensively, Baltimore is currently 6th in runs. It wasn’t that long ago that they were top 3, so they have fallen fast. They are also only 6 runs ahead of 8th in the AL (and 4 runs from 5th).  Of this group, they are only ahead of 1 team, Houston, in terms of runs scored. They are right there with Detroit, Texas and Cleveland but far behind Toronto and Boston. The Os have the 4th best team BA amongs this group. Boston is well ahead of everyone in the AL but the Orioles, Rangers and Tigers are bunched up close together in that next group. Toronto and Houston (especially the Stros) are well behind that group. Boston is also well ahead in terms of OBP. Toronto is next and then everyone else is bunched up 7-10 points behind Toronto. When you look at slugging, you again see Boston well ahead of everyone. The O’s are second and have a 10-point lead on Toronto.  With the exception of Houston, the other teams are pretty bunched up after the Red Sox and O’s. wOBA favors Boston by a wide margin as well and the rest of the teams are pretty close together.

To me, its pretty clear Boston is the best offense. I think its also pretty clear that the Blue Jays are the second best offense and that is with them not having Bautista for the last several weeks. Who is the third best offense? It’s pretty close between the Indians, Rangers, O’s and Tigers.   They each have their issues and their strong points. They are all very close and you could pretty much go either way with those guys.  Whether you think the Orioles are 3rd or 6th in this group, the separation is minor. Houston appears to be a level below this group.

According to UZR, the Orioles are the 6th worst defense out of this group. That rating is brought down by the defense. Everyone on the IF has a plus rating but everyone in the OF has a negative rating. Every other team, outside of Detroit, is well in the plus territory. They are also next to last in DRS. They are ranked first in Defensive Efficiency among these teams though.

Going into today, the O’s were 5th in run differential among these teams, with only Texas and Detroit behind them. How much weight you want to put into this is up to you however, Toronto, Boston and Cle are well ahead of the Os in this category.

So, what stands out to you? To me, the poor starting pitching and the poor OF defense are two big things. The other thing that stands out is that this is a team that relies on its offense but so do these other teams and these teams have an offense every bit as good (and some cases better) than the Orioles do. That’s not an advantage that we have over all of them despite the perception that this offense is so good.

I feel that Toronto, Boston, and Cle are better than the Orioles. I also feel that you can make the argument that Texas and Houston are as good or better. The only team among this group I feel Baltimore is clearly better than is Detroit. The race for these playoff spots is going to be a dogfight and what happens over these next 24 hours is going to play a huge role in who makes the playoffs.