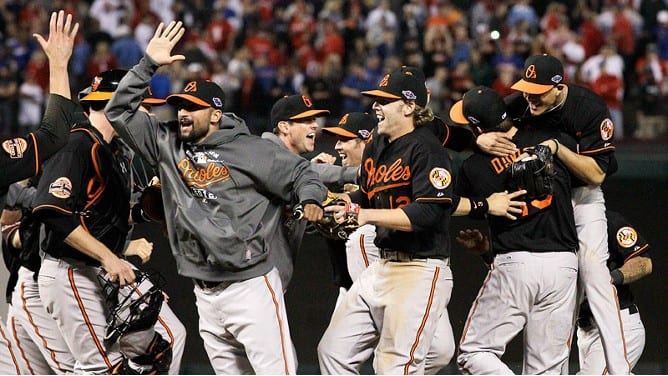 It’s September and the Baltimore Orioles have surprised almost everyone by battling the New York Yankees for a playoff spot.

Sound familiar? The 2020 season for the Orioles has drawn comparisons to the last time they found themselves surprising everyone with postseason contention, back in 2012. Of course, this season is hardly a carbon copy from 2012 for a variety of reasons, pandemic and otherwise. Let’s compare and contrast the two seasons.

For most of 2012, Wilson Betemit held down third base for the Orioles and his defense at the position hardly made anyone think he was Brooks Robinson 2.0. His hitting wasn’t much better, with a .750 OPS on August 8. On August 9, Betemit was dropped from third base in exchange for a 20-year-old who was the #3 pick in the 2010 draft named Manny Machado. While Machado finished 2012 as a slightly worse hitter than Betemit based on OPS, he provided an instant upgrade on defense and a jolt to the team overall. After all, can you name anyone else that young who made a play this important?

Ryan Mountcastle was drafted later than Manny Machado and was older than Machado when he made his debut, but he’s made an instant impact just the same. While Machado wowed everyone with his glove, Mountcastle has wasted no time crushing the ball. He has a 1.075 OPS, which ranks sixth in the league for everyone with at least 60 plate appearances. Mountcastle has also improved his plate discipline, walking in 8.8 percent of his PAs after doing it just 4.3 percent of the time in AAA last year. While it’s fair to expect Mountcastle to cool down at some point, he’s been a clear upgrade over Dwight Smith Jr. in left field and has yet to display any notable fielding issues.

In 2012, the Orioles got 29 of their 93 wins from one-run contests, winning over 75 percent of those close games. They enjoyed a reliable season from Jim Johnson, seeing the closer go 51-for-54 on saves while Darren O’Day sidearmed his way to a 2.28 ERA and a WHIP under 1.000. As a bullpen, the Orioles ranked fifth in both WHIP and ERA as well as tenth in FIP.

In the present, the Orioles bullpen as a whole hasn’t been much worse than the 2012 version, but it’s had much worse luck for when it allows its runs, going 6-10 in one-run games this season. The O’s had two one-run losses during their trip to Buffalo against the Blue Jays, with Cole Sulser being the culprit in both of the defeats. They’ve also been victimized by baserunning errors in one-run games, such as Dwight Smith Jr. getting thrown out when he was stuck between third and home in against the Jays. As we say on Wednesday night, they’ve also lost one-run games thanks to amazing defense in right field from Michael Conforto. While the O’s have certainly had some breaks go their way, they’re not doing well in their closest games of the season.

Starting on September 7, Mark Reynolds delivered seven homers in seven games. While he didn’t provide the homers in seven straight games, he still managed to give the Orioles a hilarious 1.148 slugging percentage in a 5-2 stretch for the team. Two of the seven homers for Reynolds came during one of the most famous regular-season games in Orioles history: Cal Ripken statue night. Reynolds homered in the sixth and eighth inning to help give the Orioles an iconic 10-6 win over the Yankees.

While the Reynolds hot streak was fun, it wasn’t that surprising. Reynolds had averaged 38 HRs from 2009 to 2011 and was one of the best power hitters in the league. Meanwhile, DJ Stewart’s hot streak wouldn’t have even happened if it wasn’t for Anthony Santander’s injury. After an 0-for-14 start to the season, Stewart was sent down to Bowie, returning on September 4. Stewart needed exactly one day to start crushing the ball, hitting five homers in four games, boosting his slugging percentage from .000 to .767 in just 14 at-bats. The Orioles are 3-1 during Stewart’s impressive return from Bowie and would certainly benefit from Stewart remaining hot as they brace for four games in the Bronx.

This one is pretty obvious, but it’s still pretty important when discussing the two seasons. This year the Orioles find themselves fighting for the #8 seed to make the playoffs, while 2012 saw them trying to win the division. This season has seen the Orioles play as the road team at Camden Yards against the Marlins while a different game included the eighth inning being part of extra innings. The Orioles have also spent more time playing the Nationals than every team in the AL Central and West. As part of the empty stadiums, the O’s haven’t enjoyed any home-field advantage this year, going 10-15 at Camden Yards and 10-7 away from Baltimore, including their road sweep in Philadelphia.

While it’s hard to know if changes like the three-batter minimum or the automatic base runners in extras have helped or hurt the Orioles, playing fewer games with three more playoff spots have made it a lot easier for Baltimore to make the playoffs. Even with injuries to players like Aaron Judge, it feels virtually impossible for the Yankees roster to produce fewer wins than the Orioles through 162 games, but when you’ve only got 60 games, it becomes a lot more likely.

It still feels a little unlikely the O’s will make the postseason like they did in 2012, but it’s been fun to see the feeling of excitement a surprise run at contending brings to the fanbase and the players. Regardless of how the rest of the season goes, it feels like we’ll look back at 2020 as a season the Orioles became fun again.