What’s The Best Utilization of These O’s Players? 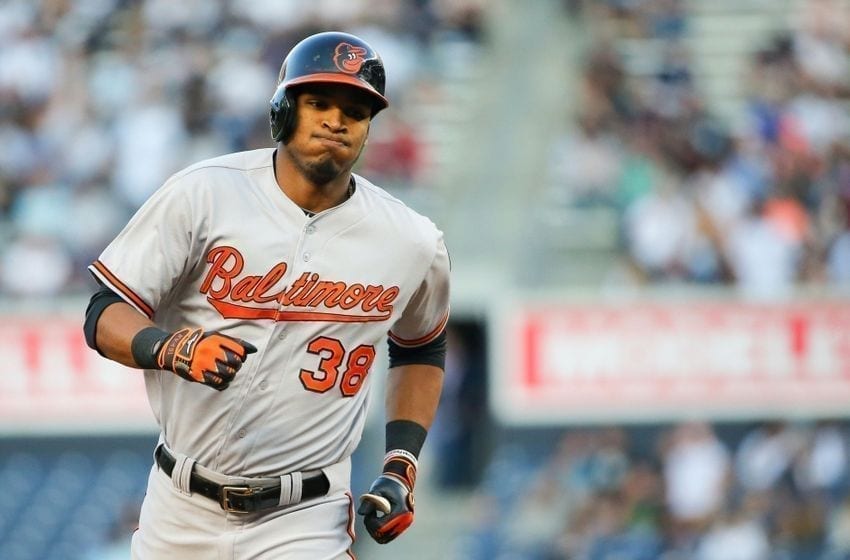 A question that any Manager faces, is how to get the most out of the roster he has available to him. As the Baltimore Orioles prepare for their 30th game of the 2015 season tonight, let’s review some of the available options O’s Manager Buck Showlater has – and discuss what might be the best utilization of those pieces.

To begin with, we should start with the obvious. Chris Davis,  JJ Hardy, Manny Machado, Caleb Joseph (as long as Matt Wieters remains on the DL), and Adam Jones are everyday starters. There is no discussion to be had, Showalter is going to regularly put their names in the lineup.

It was reported yesterday that Jonathan Schoop could begin baseball activities next week. This matches the June 1st time-frame we’ve been anticipating for his return. When Schoop is back with the O’s, I believe he joins that aforementioned group – meaning the O’s will have FT options at 1st, 2nd, SS, 3rd, C, and CF.

The spots available for rotation in Showalter’s daily lineups are LF, RF, DH – and while Schoop is out – 2nd.

The options available to Showalter are:

General Thoughts on Lough:  Hard to have any opinions on Lough’s offense based on 18 ab’s, so the entire picture of his offense has to be judged by his career numbers. I think Lough is a guy that can hit for some average, with limited on-base skills, and minimal power. Over 475 career ab’s vs. RHP, he has a .714 OPS (including 37 xbh’s). He’s got the best speed on the roster, and he’s probably the best defensive OF the O’s have. I say probably, with some difference to Jones, as Jones deserves credit for playing 150+ games annually in CF. My oft-stated opinion on Jones is that he is somewhere between the poor metrics he has received (aside from last year) annually, and the accolades he has received. Projecting Lough as better CF, isn’t overly fair considering Lough has just 214 career innings at the position. It’s also not important if he is / or isn’t since Jones is not moving from CF anytime soon. The question to ask is just how valuable Lough’s defense is on the corners, and what position is he better at? The metrics indicate he’s excellent in both Left and Right, with some indication he’s a bit better in LF.  So, like De Aza you have a lefty bat, best used against RHP, whose best position is LF.

General Thoughts on Paredes: The man is on fire. He’s a switch-hitter, that for his career has really struggled as a RHH vs. LHP (.463 OPS, 109 ab’s). He has the ability to stand at 2nd, SS, 3rd, LF, and RF – but his primary position at the Major League level is DH. The bat speed is strong. He’s crushing fastballs. He doesn’t turn 27 until November. Looking at his Minor League numbers, what jumps out to me is that 2012 with the Astros AAA team, was the only time he had 500+ Plate Appearances with the same team. I wonder if evaluation on him has been harder, because he has had multiple years of moving up and down at different levels with fairly sporadic playing time. I’m not going out on a limb by saying he’s not a .355 hitter, nor a guy that is going to slug almost .700. I do think we are seeing enough from him, that you have to wonder if there is unexpected ceiling here. The ball is jumping off of his bat. At the minimum, Showalter has to continue to ride him while he is hot. What I’ll be looking for is how he responds after a cold spell. Someone might point out that that his UZR/150 at 2nd this year is 0. I think you have to note that it’s just 24 innings, and that Showalter seems to not want to play him there – even with Schoop out. Again, ideally he’s used as a LHH DH vs. RHP.

Steve Pearce
2015 Stats: 67 ab’s, .179 / .273 / .284
General Thoughts on Pearce: You have to like Pearce’s versatility. Now that he’s playing 2nd, you have a guy that can play 1st, 2nd, 3rd, LF, RF, and of course be used as a DH. That greatly helps a roster. Part of his breakout last year was that he hit both LH and RH pitching. He’s always hit well against lefties, his .856 OPS against RHP in 240 ab’s was huge for the team as a whole. To begin ’15, he’s struggling vs. everyone. I think he was helped last year by seeing his name in the lineup everyday. That probably helping his confidence, and most importantly allowing him to find consistency. He was part of the O’s overall plan going into this year, and I think you continue with that plan despite the early issues. Move him around defensively, but continue to keep him in the lineup. The bat should come on at some point. At the minimum, has to be in the lineup somewhere vs. LHP.

General Thoughts on Snider: For his career, Snider has had basically equal production vs. lefties and righties. The sample size is too limited to make a big deal about it, but he’s hit lefties really well in his last 55 ab’s (last year, and this year combined). So far this year, he’s hitting for a good average (below his career numbers), and walking as well (10.1% BB%). His slugging has been limited though (.113 ISO, .158 career). The defensive numbers show he’s a slightly above average LF for his career (1,749.2 career innings), and a slightly below average RF (1,709 career innings). The numbers are reversed this year.  The O’s this year, need him in RF, against RHP.  I’d like to play him regularly the next Month, and see if the slugging picks up.

General Thoughts on Young: The former #1 overall pick looks improved in the OF this year. You can tell the work he did this off-season with Brady Anderson has helped. He is running better. He looks more athletic. Last year he did a great job of producing when called upon, despite sporadic use. He had 242 ab’s in 83 games. This year he is currently on-pace for 402 ab’s in 117 games. The average is good, and he typically has good ab’s. The slugging % is limited as he has yet to homer (4 doubles). For his career, he is better against lefties. Last year, he splits were better against righties. I think you can play him in the OF occasionally, and be fine. You do have better defensive options though. If you play him, it’s about getting his bat in the lineup. If that is a priority, you need to see more slugging in my opinion. Based on what we saw from Young last year, I’m not worried about his ability to stay ready, even if his ab’s are reduced.

As of now, how do you think the playing time with this group should be handled?
Looking ahead to Schoop’s return, what would be your plan then?