10 Thoughts On The Cleveland Browns Ahead of Sunday’s Game 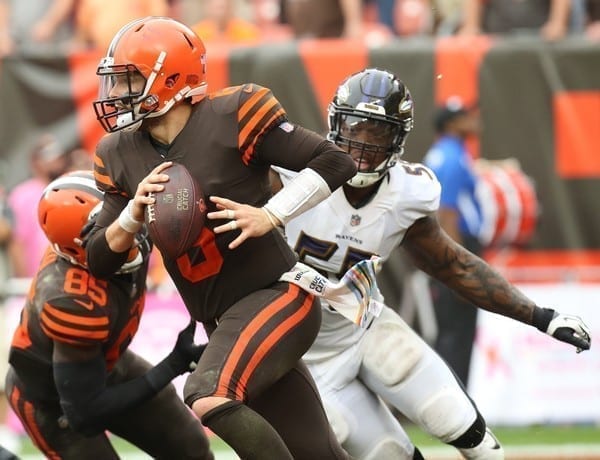 With arguably the most important game in years for the Ravens (9-6 record), here are 10 thoughts on the Browns (7-7-1 record) that should be kept in mind, and will inevitably play an important role in determining the outcome of this win or die game.

1) In the Browns Week 5 victory Cleveland limited the Ravens offense led by Joe Flacco at the time. Despite giving up 410 yards, the Browns defense held the Ravens to 9 points, all from field goals. Key stops were made allowing for more opportunities for Baker Mayfield and the Browns offense to control the game and break up the Ravens offensive rhythm. The Ravens had multiple chances to pull away and take the lead in regulation, but the Browns stole the win in a last second overtime field goal.

3) Baker Mayfield: The emergence, leadership, and swagger of top 2018 NFL draft pick Baker Mayfield has led to greater trust and confidence within the Browns offense. Rather than finding ways to lose, Mayfield’s rise to stardom has allowed for the Browns offense to lead their team to victory on multiple occasions. Since the firing of Hugh Jackson, Mayfield has had an average QBR of 114.01 and a completion % of 72.50. With the recent high level of play coupled with Mayfield’s competitive nature, the Ravens defense, under Wink Martindale, will have their hands full.

5) Browns facing a Lamar Jackson led offense for the first time: The Baltimore Ravens offense has been masterful in controlling games ever since the insertion of Lamar Jackson at quarterback. The Browns defense, who has struggled this year ranking 28th in total defense, needs to find ways to stop Jackson and the hot Ravens offense. The Browns rank 24th in rush defense, give up an average of 124.5 rush yards per game, and 4.5 yards per rush. With the aggressive north-south rushing style along with the effective use of RPOs by the Ravens offense, as well as the recent high level of play by the offensive line, the Browns front seven will need to be extremely disciplined to have any chance of stopping the Ravens rush.

6) Turnover Battle: In spite of being ranked 28th in total defense, the Browns rank 4th in total takeaways. The mistake prone Lamar Jackson needs to be extra careful to avoid simple mistakes as well as losing the turnover battle. The Browns average 2 turnovers per game which ranks 2nd in the league. Impact players such as safety T.J. Carrie, who has 1 interception and 2 forced fumbles and linebacker Joe Schobert, who also has 1 interception and 2 forced fumbles, could be difference makers.

7) Myles Garrett: In two career games versus the Ravens, star pass rusher and former top pick Myles Garrett has only managed to get 4 tackles, 2 QB hits, and 0.5 sacks. The Ravens offensive line, anchored by LT Ronnie Stanley, has done a fantastic job in marginalizing Garrett’s abilities. Despite his limited impact versus the Ravens in past games, Garrett has the capability of changing a game in an instant. The Ravens offensive line will, once again, need to stop Garrett and protect Lamar Jackson, especially on passing downs.

8) Browns Receivers: The Baltimore Ravens secondary, arguably the best its been in years, will need to continue to assert its dominance by shutting down the Browns receiving corps, which starts with Jarvis Landry. Landry is the Browns certified chain mover with an average yards per catch of 11.5. As they usually do, the Ravens tend to use multiple different cornerbacks against a team’s top receiver. Unpredictable looks by the Ravens secondary will be key in stopping the Browns passing attack. Browns receivers also excel with chunk plays at key moments. Antonio Callaway thrives off of chunk plays as shown with his 5 catches above 20 yards. Former Raven first round pick Breshad Perriman, who was picked up by the Browns after being cut by the Ravens, is excelling with the Browns and averages 22.7 yards per catch. It will be interesting to see whether he will take vengeance upon his former team by having a huge game or solidify his status as a bust by having little to no impact on the outcome of the game.

9) Browns Secondary: The Browns pass defense ranks 27th in the NFL. They give up an average of 264 passing yards per game. Although the Ravens established themselves as a run first offense, Lamar Jackson has shown he can make big plays with his arm. Though Jackson only averages 155.83 passing yards per game, he has proven he can take control of the clock and move the chains. Despite time being one of the main factors when playing the Ravens, turnover opportunities still present themselves with Jackson who is learning to take less unnecessary risks, but remains susceptible to errant throws. The Browns secondary, led by playmaking safety Damarious Randall, who has 4 interceptions, produces many interceptions. The Browns are 4th in the league in total interceptions. That being said, the Browns secondary must be sure to avoid big plays and need to take advantage of turnover opportunities that come far too often with Jackson’s inconsistent arm. Jackson will have to bring his A-game, especially through the air to overcome the savvy Browns secondary and solidify the Ravens Wild Card spot.

10) Nick Chubb: Chubb has solidified himself as the top running back in the Browns backfield when he earned his first start in week 7. He averages 5.3 yards per carry and is closing in on a 1,000 yard rookie season. Chubb’s play will be one of the main factors in determining the outcome of the game. The Ravens defense only allows 3.8 yards per carry and 85.1 total rush yards per game. If Chubb performs at the high level he has been recently, it will open up the play action for Mayfield which would allow for a more unpredictable offense, first down conversions, and a fatigued defense. On the other hand, if the Ravens stop Chubb for minimal gains, Mayfield will end up throwing the ball much more, which will allow for easier anticipation for the Ravens defense, more 3 and outs, and more scoring opportunities for the Ravens offense.

Adrian was born and raised in Baltimore and is a huge fan of both the Ravens and Orioles. He is currently a Freshman at Franklin and Marshall College looking to double major in History and Economics. He is also a member of the Men’s Varsity tennis team where he will help lead the team to a hopeful conference title.