Wilson Betemit is, to me anyway, an underrated component of the Orioles roster. Maybe underrated is the wrong word here. He provides little, if not zero or even negative value on defense. He can “play” 3B or 1B but in reality he’s a DH at this point in his career. I actually think Betemit might have some trade value as he’d be a huge asset to an NL team coming off the bench to pinch hit, but that’s neither here nor there.

In 2012 Betemit put up a triple slash of .261/.322/.422 in 376 plate appearances, primarily as a part-time 3B, part-time DH, part-time bench guy. Overall Betemit saw action in 102 games, which is significant when you consider that he missed almost 20 days due to injury.

Much to my chagrin, Betemit received 86 plate appearances against left-handed pitching in 2012. Despite technically being a switch hitter, Betemit is clearly the much better hitter from the left side. This disparity is even more obvious when you consider his batting average from either side of the plate: .140 vs. Lefties, .302 vs. Righties.

To further illustrate the point take a took at Betemit’s hot/cold zones as a Righty in 2012. This graph shows his “True Average” (a weighted batting average statistic) with the percentages showing how his performance compares to other right-handed batters against lefties. Keep in mind that 100% would be average. 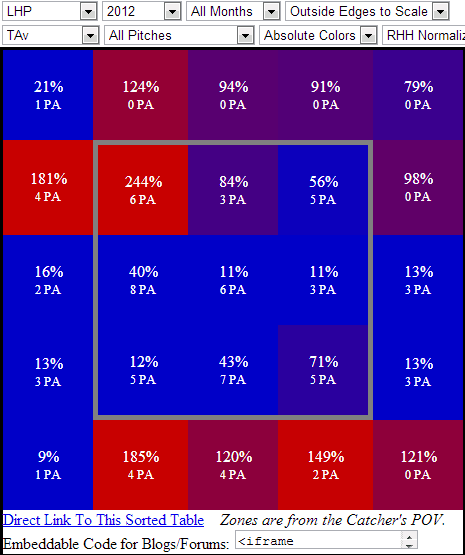 The difference between that and his hot/cold zones from the left-side is obvious as you can see in the same graph, albeit from the other side of the plate, below: 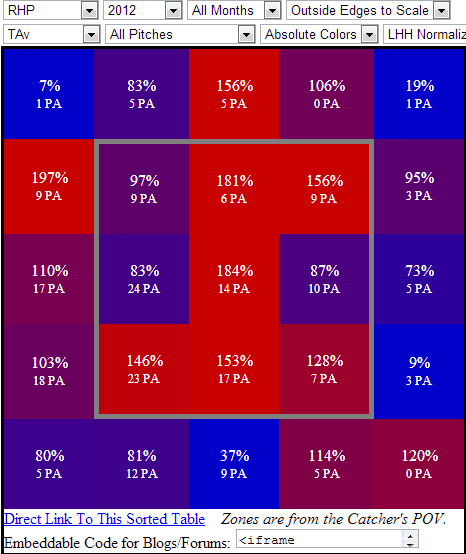 It’s clear that Betemit is a much better hitter from the left-side. In actuality, he’d be a great centerpiece in the lineup if he batted nearly exclusively against right handed pitchers. My hope and projection is based on Betemit being the lefty side of a DH platoon in 2013.

Bill James sees Betemit getting a lot more playing time than he had in 2012. I’m not so sure that’s the case, as neither Duquette nor Showalter can make the argument for putting a .140 batter in the lineup. However, as the left-handed side of a platoon he could see a lot of at-bats regardless. Add in the chances that someone gets hurt and Betemit has to cover their position, I think he stands to see about the same level of play as he did in 2012.

I project that Betemit will get the Left-handed hitting side of a platoon at DH, and therefore the lion’s share of plate appearances. Here is my prediction, along with Bill James’ below: