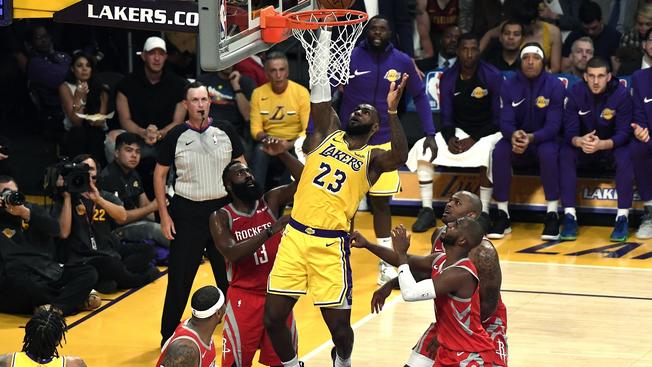 In order to prevent the debacle that was last year, when I predicted that Kawhi Leonard would win MVP thinking he would be healthy, I waited a week before reaching any conclusions. Or I’m just lazy.

I will approach this from a betting perspective (odds from Bovada as of 10/16) just like I did with the over / under picks. You may discuss this article on the BSL message board.

James is the betting favorite despite not winning since the 2012-13 season, which was his fourth MVP in a five season span. That partially explains why he has not won since, as voters tend to grow tired of voting for the same guy year after year. Beyond that though, LeBron’s effort, especially defensively, has waned to varying levels in recent regular seasons, and other players have risen, most notably Steph Curry, and the former Thunder trio (Durant, Westbrook, Harden), who have combined to win the past five MVP’s. So why is LeBron the favorite now? Well his move to L.A. is a big reason as some think, me included, that he will be reinvigorated in his new situation surrounded by more youth, playmaking, and athleticism. He will also get more credit for leading the Lakers to 50+ wins after five consecutive losing seasons where they only averaged 25 wins (36 last year) than he would if he led the Cavs to another such season. Plus, playing for the Purple and Gold carries a cache that is unparalleled in the Association.

With that all said, I do not think this is a good bet, unless it is used as a hedge to go with some longer shots that I will recommend later. Between potential age and minutes related regression, possibly playing fewer minutes if he and the team are smart about it, the learning curve of fitting in with a new team, being unlikely to win 55+ games, and presumed far from max effort on D, LeBron is doubtful to truly be the most valuable player this year. I wouldn’t count him out though, and even if he isn’t the true MVP, it has been a while since he has won, and the all-important narrative could easily be favorable for King James.

If healthy, and he largely has been of late, AD is quite possibly the best regular season player in the league. Guys like LeBron, Durant, and Curry elevate their game more in the playoffs, which is actually more of a knock on them than on Davis, because the main reason why their performance is raised in the postseason is because their effort is not always the greatest in the regular season.  Davis finished third last year behind Harden and James, and should continue to get better (this is only his age 25 season). Plus, the Pelicans should win 50ish games and could push the mid 50’s if healthy, which is enough games to win MVP as evidenced by Westbrook winning two seasons ago when OKC won 47 games. Anthony won’t average a triple double, but 30 and 12 plus 4.5 stocks (steals + blocks) is easily in play this year.

Davis is my official choice to win the MVP this year so obviously I recommend betting him at +450. He is going to be a beast this year, the Pelicans should be good enough, the voters will be sick of Harden, Curry and Durant will split votes, and Davis should be the best of younger guys.

The Greek Freak has a pretty similar case as Davis does. He will challenge AD for best regular season player and best MVP narrative so I think this is a reasonable bet, especially as a hedge in case Davis gets hurt or the Pelicans lose a few more games than the Bucks, which is quite possible since Milwaukee’s coaching situation should improve their win-loss record by quite a few games.

Harden will have another MVP caliber season, but voter fatigue is unfortunately a big factor in this, and he won last year and finished second the prior year. Beyond that, James Harden fatigue is a real thing because he can be an annoying player to watch due to his propensity of drawing cheap fouls as well as the Rockets style of play being divisive. Do not bet on Harden.

These are pretty good odds for the clear best player  on a team that has a legit chance at winning 60+ games. Kawhi is also in the conversation for top 3 player in the league (the top 10 in the league is absurdly stacked!) and being on a new team and a clear upgrade over DeMar DeRozan are helpful for the narrative. Health is a concern after he missed almost all of last year with an injury that is apparently degenerative, but that is priced into the odds here, so I think this is a solid semi-longshot bet.

Both of these guys are MVP caliber players and have won in the past, but unless one misses a solid portion of the season, it is hard to imagine either being given enough credit for the team’s success to garner enough support. Additionally, I question the motivation level for Durant and Curry and the entire team, which will likely impact their effectiveness, but also their minutes played.

These odds may seem tempting, but Embiid’s game isn’t polished enough for me to think he’ll overtake other young stars like Davis and Antetokounmpo, plus durability is still a big concern here. I would stay away.

The Celtics have a legit chance at having the best record in the entire league, but that is largely due to having such a plethora of talent, plus an elite coach, rather than having a superstar. Irving is not a top 10 player in the league and has durability concerns so I think this would be a waste of money.

He is coming off a knee surgery and is now in his age 30 season, two bad signs for a player that depends so much on being one of the best athletes this league has ever seen. Voter fatigue and possibly regret are negative factors for Russ as well, and as we saw last year, thankfully a triple-double for the year no longer guarantees one an MVP award. Pass.

Speaking of triple-doubles, Ben Simmons could average one for an entire season if he made that a goal. I would not have hated betting him as a longshot because it would not be shocking to see him emerge as the best player on that team this year and have a great narrative behind him, but it is still asking a lot to see him make the kind of leap to really get him into the picture. His current back problems aren’t making me optimistic either.

This is the sleeper pick I would go with, especially considering how he has come out of the gate (first player since Wilt with a 30+ point triple-double where he didn’t miss a field goal attempt!). To be clear, I would be surprised if Jokic wins the MVP, but I do think he has a chance and therefore represents great value at such long odds. The Nuggets could be really good this year, they will be a fun team to watch, especially because of Jokic, and his stats should be absurd, and I can definitely see the media falling in love with him.

Anthony Davis is my pick to win MVP this year so I would of course bet him. Giannis, Kawhi, and Jokic are the other bets that I like the most. I really would be surprised if anyone other than those guys or LeBron won MVP this year in part due to who I think really will be the most valuable, but also due to the power of voter fatigue and the narrative.

Quickly on the young guys, Jokic, Simmons, Embiid, and especially Antetokounmpo and Davis have a chance at separating themselves from the pack as the best relatively young star, possibly the best player in the league period, and win their first of multiple MVP’s on the way to potentially a top 15 ever resume.

The former Thunder trio plus Steph Curry all arguably have top 15 ever peaks and are jockeying for position in my rankings of the top 25 players of the past 25 years, which in a few years will become the top 30 players of the past 30 years, but more importantly of course, their all-time ranking.  Durant has a good chance at finishing his career in the top four in points (with strong efficiency) and is on track to become a top 10 player ever while Curry will likely slot in lower due to his prior durability issues and the fact that he took longer to become great than did Durant or most of the other all-timers.  Harden has a similar issue regarding being somewhat of a late bloomer, which was largely due to his 6th man role on OKC, and Westbrook is a divisive player, but is putting together a very strong resume based on awards and statistics. Those three all have very realistic chances of being top 25 players ever and depending on how long they remain elite, could obviously rise up further, with Curry having the highest upside.

Lastly, the legacy that is discussed more than all others combined: LeBron James. LeBron vs. MJ has been a frequently debated topic in recent years, and it has become a more valid conversation recently as LeBron has held off Father Time so far and has remain arguable the best player in the league during a time where the competition for that spot is fierce. LeBron is unlikely to catch MJ in titles, and this year almost certainly will not help in that regard, and even if he does eventually get to 6 rings, haters will always be able to bring up the stupid point of his Finals’ record not being perfect as if losing earlier in the playoffs is better than losing in the Finals. Where LeBron can continue to build an argument for being the best ever is through the sheer totality of his career numbers and accomplishments rather than rings or peak based arguments. MJ has a significant ring advantage and has a slight apex advantage as most would say he was a little better at his absolute pinnacle than was LeBron. James though has already arguably surpassed Jordan in career value  so this year and the years to come are opportunities for LeBron to separate himself from Jordan in that category in a clear and significant way as well as surpass Kareem. The other factor with the GOAT argument is the narrative, which I touched on when discussing LeBron’s MVP chances. If LeBron propels the Lakers to 50+ wins, is seen as a great leader, fits in with a different type of team, and is awarded the MVP, that will make for a really nice chapter in the book of LeBron.

Michael grew up in Owings Mills, MD, but also lived in Southern California for 12 years. He is a lifelong Orioles fan, a lover of travel, the outdoors, craft beer, and the NBA. Michael is a high school social studies teacher in Baltimore, where he also resides.