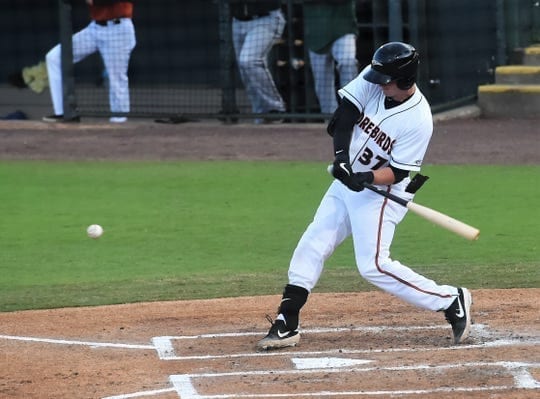 With the minor-league season in the books, Baltimore Sports and Life is recapping the teams in the Baltimore Orioles farm system.

In part one, I will cover the seasons of the Gulf Coast League (GCL) Orioles, Aberdeen IronBirds, and Delmarva Shorebirds. Part two will be written by my BSL colleague Nate Delong, recapping the Frederick Keys, Bowie Baysox, and Norfolk Tides.

The recaps will focus mainly on the top prospects in the system, and higher-round selections in the 2019 drafts. Across the three teams featured in this story, there was a strong slate of players, including first rounders from the 2018 and 2019 drafts and several other standout prospects.

Some of the Orioles’ top prospects passed through the GCL this season, including catcher Adley Rutschman and shortstop Gunnar Henderson. Rutschman played in just five games before being promoted to Aberdeen, while Henderson spent his summer at the level.

After a 7-for-36 start over his first 10 games, Henderson started to rally in late July, continuing that momentum through the season’s end. Overall, the 18-year-old batted .259/.331/.370 with a 103 wRC+ across 121 plate appearances in 29 games. The Orioles could opt to take their time with the second-round selection, keeping him back in extended spring training next year before assigning him to Aberdeen, but regardless he should enter 2020 as a consensus top-10 prospect in the organization.

Another notable offensive performance came from fellow shortstop Darell Hernaiz, who batted .263/.371/.364 with a 118 wRC+ over 116 plate appearances. Chosen in the fifth round of this year’s draft, Hernaiz turned 18 this summer and certainly got off to a promising start, though the Orioles figure to take their time with his development.

Aberdeen benefitted from an influx of 2019 draft selections, headlined by Rutschman. In his longest stint with any one minor-league team this summer, the first-overall pick batted .325/.413/.481 over 20 games.

Among the other 2019 draft picks making appearances in Aberdeen included outfielders Kyle Stowers (Competitive Balance B pick) and Zach Watson (third round), and shortstop Joey Ortiz (fourth round). Watson posted a 117 wRC+, but did not show much patience at the plate, compiling a 6.7 BB% rate compared to a 26.7 K% and a .300 OBP over 60 plate appearances at Aberdeen. He was promoted to Delmarva before season’s end, where he played in 16 games before suffering a season-ending injury after being hit by a pitch in the hand/wrist area in August. Stowers batted .216/.289/.377 with a 102 wRC+ over 55 games, while Ortiz batted .241/.345/.267 with a 96 wRC+ in 228 plate appearances.

Two 2019 picks that initially flew somewhat under the radar but found success at Aberdeen were outfielder Johnny Rizer (seventh round) and third baseman Toby Welk (21st round). Drafted as a senior out of TCU, Rizer batted .307/.374/.537 in 27 games before being promoted to Delmarva, where he compiled a strong 36-game stint that allowed him to hit .308/.365/.456 between the two levels. Welk, meanwhile, emerged from Division III Penn State Berks College to hit .344/.397/.500 in 204 plate appearances, before earning a nine-game stint with Delmarva to end the season.

The pitching staff received solid contributions from Griffin McLarty, who posted a 2.78 ERA and 2.12 FIP over 22.2 innings. The right-hander was chosen in the eighth round out of College of Charleston, making him the first pitcher chosen by the Orioles in the 2019 draft. One round after taking McLarty, the Orioles selected fellow right-hander Connor Gillispie out of VCU, who delivered a 1.77 ERA and 2.22 FIP in 20.1 innings for the IronBirds.

With a roster loaded with prospects, the Shorebirds set a new franchise record for regular season wins before being defeated by Hickory (Texas Rangers) in the North Division Championship Series. Adam Hall followed up his solid 2018 at Aberdeen by batting .298/.385/.395 with a 133 wRC+ this season, while a few 2018 selections—including outfielder Robert Nuestrom and infielder Cadyn Grenier—had strong numbers before being promoted to Frederick. Third baseman JC Encarnacion, whom the Orioles acquired in July 2018 as part of the trade that sent Kevin Gausman and Darren O’Day to Atlanta, returned to Delmarva and did not build upon his promising 2018 campaign. In 120 games, he batted .240/.293/.356 with nine home runs.

Several pitching prospects wore a Shorebirds uniform this season, highlighted by 2018 first-round selection Grayson Rodriguez. In his first full season, the right-hander struck out 129 batters in 94 innings while posting a 2.68 ERA and 2.64 FIP. Rodriguez, who will turn 20 in November, has not only moved his way up the organization’s prospect rankings with his 2019 performance, but stands a strong chance of landing on Top-100 prospect lists for all of baseball coming into the 2020 season. Expect him to pitch in Frederick’s rotation next season, with the Orioles taking a methodical approach with his development over the coming years.

Another prospect that turned in a strong year was Drew Rom, who fanned 122 batters in 95.1 innings with a 2.93 ERA and 2.74 FIP. Like Rodriguez, Rom will turn 20 this offseason and should be ticketed for Frederick in 2019.

One of the most encouraging performances this season came from Gray Fenter. A seventh-round pick in 2015, Fenter had a 1.81 ERA and 2.96 FIP and 123 strikeouts over 94.1 innings. This represented Fenter’s strongest performance in any season since his 2016 Tommy John surgery and makes his prospects all the more intriguing going into his age-24 season in 2020.