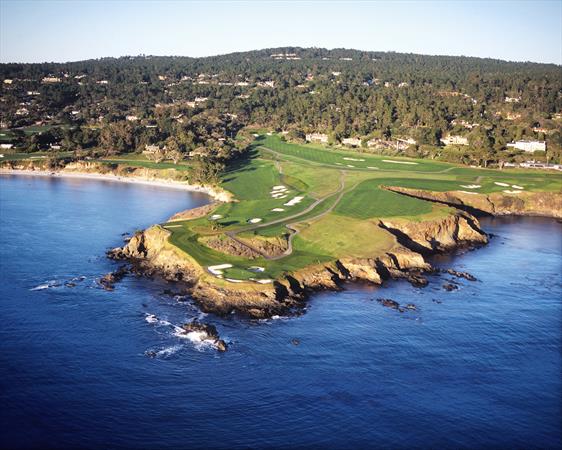 If you have $595, you can play a round at Pebble Beach Golf Links. The number one ranked public course in the America. To play it on July 4th weekend, still in U.S. Open, championship caliber conditions, it’ll run just a mere $2,895. Included is two rounds of golf on the various courses of the Monterey Peninsula, and two nights lodging at the luxury resort.

Pebble Beach is the most picturesque golf course in America, with a number of notable holes. The par-3 7th (pictured above, from left to right on the tip of the peninsula) is the shortest hole in major golf (109 yards) with your tee shot flying out to the Pacific Ocean, landing on the green 29 feet below, surrounded by six bunkers. The par-4 8th (pictured above, up the right side of the peninsula) is an uphill tee shot to a blind landing area, leaving you with what Jack Nicklaus calls, “the finest second shot in golf.” A second shot over a cliff, water, to a small green. Tiger Woods calls it, “the most daunting approach shot in the game.” Then you have the medium length par-5 18th that runs along the Pacific Ocean and will lend to an eagle chance to close out the round.

The course will play the shortest length in a U.S. Open in quite some time at just over 7,000 yards. It also plays at a par 71 rather than the par 70 setups U.S. Open courses convert to. Only the 2nd hole has been turned into a par 4 rather than its usual 5.

Discuss all thing during the the U.S. Open on our message board.

All eyes will be on three men this week. First, Brooks Koepka. Number one ranked player in the world looking to pick up his third straight U.S. Open title. The only other man to do that was Willie Anderson between 1903-1905. Three U.S. Open wins puts him in the same company as Anderson, Bobby Jones, Ben Hogan, Jack Nicklaus, Hale Irwin, and Tiger Woods. Koepka has won three of his last five major starts. For you bettors out there, Koepka is just behind the favorite at 8-1, while Dustin Johnson is getting 15-2.

Third, Tiger Woods (12-1). He returns to the place where he lapped the field, winning by 15 strokes in the 2000 U.S. Open. He also is one win away from 82, which ties him with Sam Snead for most PGA tour/major victories of all time. A Tiger win here would also be his 16th major, making him two shy of Jack Nicklaus’ record of 18 major titles.

Coverage: All coverage can be seen on USOpen.com. The following are the broadcast times.

Keep an eye on: The Front Nine.

Five of the easiest holes on the course by way of scoring in the 2010 U.S. Open at Pebble Beach, came within the first seven holes. It’s going to be important for guys to get out to a fast start in their rounds. However, the 8th hole is no easy task, and the par-4 9th has been extended to 526 yards.

While most major championships favor the long hitters, this course is going to reward strong iron play. The greens at Pebble beach are smaller, with smaller safe landing areas. Reports are the tilt on the greens are in peak U.S. Open form with no rain in sight to soften things up.

Scoring is tough at the famed course, especially when the USGA gets their hands in the mix. Jack Nicklaus won here in 1972 at +2. Tom Watson in 1982 at -6. Tom Kite in 1992 at -3. Tiger in 2000 posted -12 and won by 15. He was the only play to sniff red numbers and blew the field away. In 2010 Graeme McDowell won with a score of even par. No one in the red numbers. In fact, in the last three U.S. Opens at Pebble Beach, only three men have finished under par after all four rounds.

I  would certainly not expect a leaderboard like The Masters where multiple guys are double-digits under par.

In the last U.S. Open at Pebble, players hit a green in regulation 52% of the time. In 2000 at Pebble, just 48%. No course has had players post a lower GIR% since then. So, who are the best iron players in the game, and who’s short game when they miss the greens will save them this week? Her are the top ten in some stats that will factor in this week.

Strokes gained approaching the green (in the field):

Strokes gained around the green (in the field):

Strokes gained putting (in the field):

Impressive lists of players there. All possessing the skills needed to win this coming Father’s Day. Perhaps an edge given to Justin Thomas (22-1), Hideki Matsuyama (28-1), and Brandt Snedeker (40-1) who show up on two of the three lists of what will make or break guys in the rounds to come. Longshot bet might go out to Keegan Bradley (125-1) for being the top American in iron play coming into the event, considering Americans have dominated the event historically, and have won the previous four U.S. Opens. However, since 2000, the score is America 10, World 9. Henrik Stenson (50-1) would be a value bet if you think World is due to even the score for the century.

Someone I haven’t mentioned yet that could win: Francesco Molinari (33-1).

I picked him in this spot during in my lead up to The Masters. He’s not a favorite. He’s not an American. He’s not atop any of the statistical groups. He’s just solid all around. Ranked 6th in the world. Third place in the Dell Match Play this year. Won Arnold Palmer’s tournament at famed Bay Hill in March. Great finishes in his three of his last four majors. Paired with Tommy Fleetwood, swept their 2018 Ryder cup matches, and bested Phil Mickelson in singles play to clinch the cup for the Europeans. I thought of him as a silent assassin who doesn’t crack under pressure. But then he, and seemingly everyone in the final two groups at The Masters dumped their balls in the creek off 12 tee. A low hanging branch on the 15th hole clipped Molinari’s ball, dumping another one into the drink in front of the green there. He hasn’t been the same since, missing the cut at the RBC Heritage, finishing T48 at the PGA Championship, and T53 at the Charles Schwab Challenge.