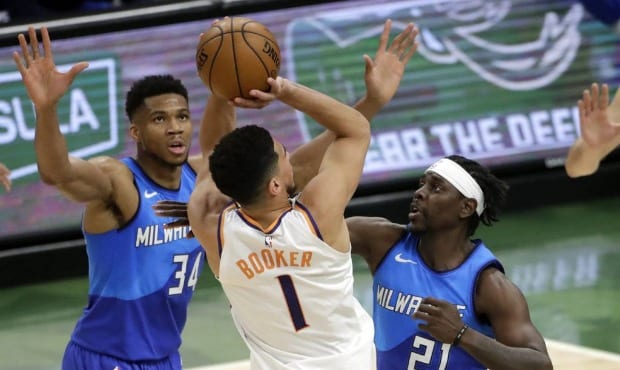 Antetokounmpo has been out due to a hyperextended left knee, a diagnosis which was regarded as good news given what was thought when the injury occurred during Game 4. He’s considered to be day-to-day, and Antetokounmpo’s availability (and just how healthy he is if cleared) will be one of the biggest storylines of the series. As we saw against the Hawks, Milwaukee does have enough to win even if their best player remains sidelined. Khris Middleton is a high-level offensive player who can score on multiple levels, while Jrue Holiday is capable of making big shots when needed. Bobby Portis filled in quite capably in Games 5 and 6, while Brook Lopez stepped up after getting off to a slow start in the conference finals.

With Paul sidelined, it was backup point guard Cameron Payne who stepped up as the Suns won the first two games of their series with the Clippers. CP3 struggled in his return, Devin Booker broke his nose, and Payne sprained his ankle, which opened the door for the Clippers to get back into that series. But Phoenix managed to get out of Los Angeles with a split, and in Game 6 of that series Paul produced an absolute masterclass to close out the series. A franchise that proved to be the darlings of the bubble last summer, not only did the Suns end their 10-year playoff drought, but they also managed to reach the NBA Finals. And for as improbable as that story would be if written in a script, it really doesn’t feel all that wild given what we’ve seen.

Booker has grown into a bonafide star, and the development of Deandre Ayton can’t be ignored either. A bit of an enigma early in his career, as he was prone to disappear when his touches dried up, Ayton was consistently impactful during the Western Conference Playoffs. Phoenix will need similar production from him if they’re to win the franchise’s first NBA title. Add in some talented young wings in Mikal Bridges and Cameron Johnson, and another solid veteran in Jae Crowder, and Monty Williams has a rotation that proved to be good enough to compete with any in the NBA.

While the Suns were “pedal to the metal” throughout the regular season, Milwaukee’s sole focus was to put together a team capable of winning an NBA title. They’d done the “gaudy regular season wins total” business in the past, only to fall short of expectations in the playoffs. The acquisition of Holiday was made with the postseason in mind, and he made some plays down the stretch of Game 6 that showed why the Bucks picked him up. The same can be said for the signing of Portis, who can be used at either the four or the five (depending on the matchup) and the acquisition of P.J. Tucker.

Tucker isn’t as productive of a corner three shooter as he was in previous years, but he remains a player worth respecting in that regard. But his greatest value can be found on the defensive end, as he has taken on varying assignments throughout the postseason. The Bucks are a very good perimeter shooting team, but they can be prone to the occasional drought. And it’s also worth noting that, in their desire to close off the paint, Milwaukee was one of the league’s worst teams at defending the three during the postseason. Phoenix was a middle-of-the-pack three-point shooting team during the regular season, but they don’t lack for shooters. That being said, this series could be decided in the mid-range. If Paul and Booker are able to get to their preferred spots with little fuss, Milwaukee could be in trouble whether Giannis plays or not.

This was to the season in which Milwaukee was expected to reach its championship “destiny;” falling short of the Finals could have cost Mike Budenholzer his job. But the injury to Antetokounmpo comes at the worst possible time for Milwaukee, and they’re up against a franchise that has lived a charmed existence (as much as one can during a pandemic) over the last year or so. The young talents showed signs of growth in Orlando last summer, and GM James Jones managed to add the right veterans to the mix. With that being the case, I’ll take the Suns in six games to win the franchise’s first NBA title.