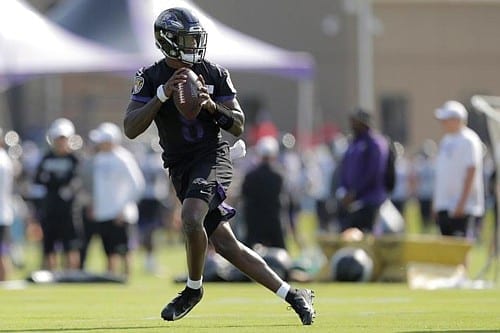 With the impact of COVID 19 already wreaking havoc on the typical preseason schedule, I think the Ravens come at a big advantage heading into this year. A majority of the 53-man roster as we head into the year appears that they will be set. By my count, I’ve got 49 guys that are nearly locks due to being a draftee or veterans of the team.

I think what stands out to me is that the Ravens will certainly carry 3 TEs and 6 WRs. If that’s the case, I think one of Wolfe and Scarff make the roster, with Scarff in the early lead. And I would have pegged Moore for that spot, but I think Scott may be the leader there. Wesley is a potential darkhorse as he’s been around for a while, but given the Ravens have talked about Brown and are trying out Bryant, it seems like they prefer a veteran presence there. I think one of Stone and Richards will be there both for special teams and the need and desire to have a 5th safety to cover for team needs there.

Barring any other injuries and the way that the Ravens have talked about carrying a 3rd QB, there isn’t another spot.

Chase Elliott is an interesting UDFA that is getting some chatter right now and Barner is on the roster and I think he’d have value but I think he’s just going to get squeezed out unless someone gets hurt. Bond, Alaka, Ehringer, Holden, and Wesley all likely can make their way to the Practice Squad. Ellis is a veteran that gets squeezed out here, but I think he’s a guy that could likely be brought back if someone gets hurt (Peko has remained unsigned as a UFA as well).

I’d say that Board and Ward or McPhee could be at risk with some really great play in training camp from someone else, but I don’t see how the value Board brings on ST or the depth from Ward/McPhee is wasted. I’d rather let all the veterans plan when there really isn’t a prospect being exposed or risked on the team, the one prospect at risk could be one of Wolfe and Scarff loser, but I wonder without preseason games, will we really see another team take a chance to roster a TE that no one drafted? (And if there is any team to be on the PS as a TE, you’d think it’s the Ravens, so if Wolfe doesn’t make it to the PS, you’d like the Ravens will have their pick of any TE on any PS, which there will probably be a decent number of.)

Some of these spots are going to open themselves up over time, they always do, even during non-game situations (sad to see Marshall hurt). But as it stands today, the Ravens roster feels pretty firm with a decent chance that guys like Richards, Ellis, Barner, and Scott or Moore could be heading to other teams.