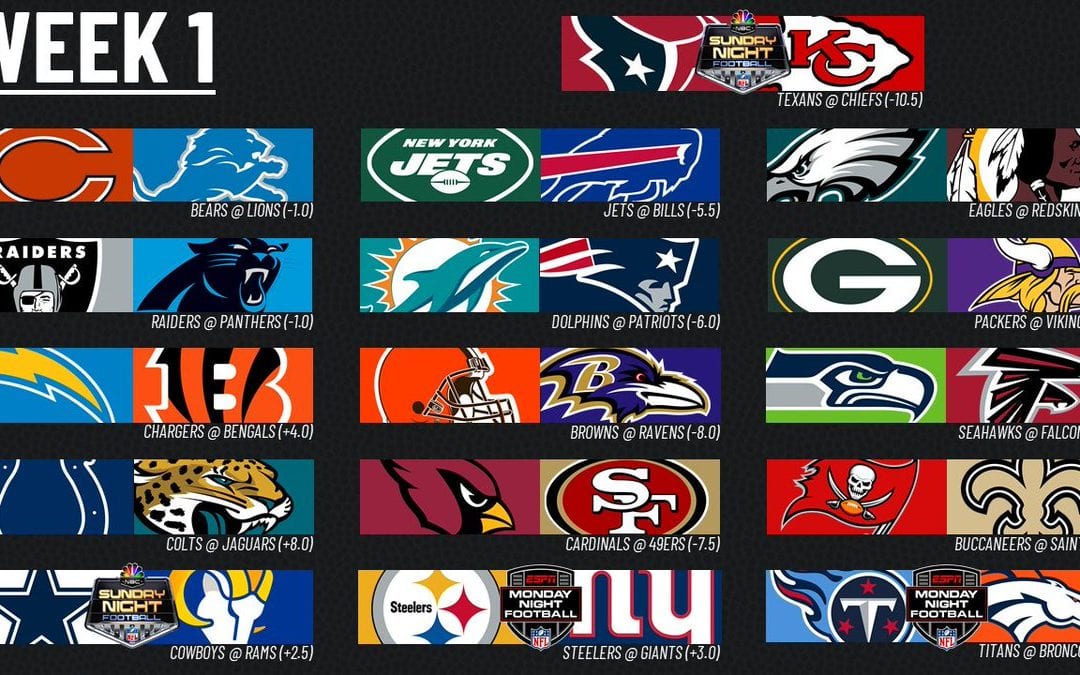 Well, I guess we’re doing this.

Guess what? None of that happened. At least not yet. And here we are. I saw it myself at around 5:30 p.m. PT on Thursday evening, when the Texans and Chiefs kicked off the 2020 regular season at Arrowhead Stadium.

So, how should we feel as a family of football lovers? Let’s say we should approach this with a cautious optimism. Sure, things haven’t fallen apart yet, but there is a long road ahead. The other 30 teams will start traveling over the next few weeks and the league needs to continue being vigilant and conduct rigorous health checks.

Some of you might feel it’s inappropriate to enjoy football during a time of seemingly never-ending strife. That’s fair. Nobody can fault you for having that attitude. However, I’m going to put a smile on my face and enjoy football for as long as it lasts.

And most of all, here’s hoping the players, coaches and other various team personnel stay healthy. Alrighty let’s move on.

Vegasinsider.com lists Patrick Mahomes, Wilson and Lamar Jackson as the top three favorites to win the award. We’ve seen Mahomes and Jackson lift the hardware over the past two seasons, now it’s time to complete the trifecta.

Unlike the NBA, where it seems the game’s biggest stars take turns at receiving the honor, the NFL usually does honor the best player from that season. However, maybe it’s time for football to take a cue from the round ball.

Wilson has for too long gone unappreciated by the pundits and the football-loving world. He’s been playing behind a patchwork offensive line and a primitive offense for too long. And yet, he’s coming off back-to-back seasons with a QB rating over 105.0 with 7 or fewer interceptions, and three straight years with at least 30 touchdown passes.

And for all of that, he’s never received an MVP vote. Not a single one. That ends this season. Sure, he might not say much of anything during interviews, but this isn’t Speech 101. This is football. Give the man his due.

Hmmm, do I have an NFC West bias? Perhaps. Sorry, not sorry. At least I’m not a homer. According to DrraftKings Sportsbook, Rams star Aaron Donald has the best odds to bring home the trophy, which would make him a three-time winner. Tied with J.J. Watt and T.J. Watt (yes, they’re brothers) for second place is Bosa, who is entering his second pro season.

He was named the defensive rookie of the year after racking up nine sacks from his rush end spot. He gives us every reason to believe he will take a big leap forward in 2020. He’s already a nightmare to block and the 49ers’ attacking style of defense will give him many chances to put up some impressive numbers.

Now, there’s a part of me that hopes T.J. Watt wins the award, since it would be pretty sweet to see the Watt bros have the same hardware, but I’m willing to put that aside. Give me Nick Bosa all day.

The Chiefs are coming off a Super Bowl win. Their offense is a well-oiled machine. They can move the ball seemingly at will through the air. They had one hole to fill, which was at running back since Damien Williams decided to opt out over COVID-19 risks.

Enter Helaire. You might have noticed him gain more than 160 all-purpose yards in the college national championship game against Clemson. Well, Kansas City scooped him up at the end of the first round of the draft, and he’s all set to handle the bulk of the work out of the backfield.

The pathway to the award is clear. He’s already a fantasy darling. He just needs to walk the walk. Don’t worry, he will.

You heard the hype. I heard the hype. NFL scouts salivated over his potential in the lead up to the draft and Washington did the smart thing by taking him with the No. 2 overall pick. He has landed in a great situation with Ron Rivera as his head coach. And he did something even more impressive by beating out four-time Pro Bowler Ryan Kerrigan for a starting job.

We were promised the goods. Young should be guaranteed to deliver.

Those of you who have read this column over the past few years know my respect and fear of Tom Brady. His greatness is such that I don’t feel comfortable picking against him. Ever. It doesn’t matter how bad his weapons are or how much Bill Belichick resents him. When it’s time to get it done on the big stage, Tom delivers. It’s always a surprise when he fails to.

Now, he’s in a new city. Hey, remember all those issues he had with subpar weapons in New England? A distant memory. His offense in Tampa Bay is loaded. The defense was dominating down the stretch in 2019 and won’t have to deal with a quarterback (Jameis Winston) throwing 30 interceptions and setting up short fields for opponents.

Some think the Bucs will start relatively slow. I disagree.

Which brings us to the Ravens. It’s true, last season’s playoff loss was a disappointment, but it’s just another building block. This team should breeze to another division title and Lamar Jackson still has room to grow, which is frightening for a player coming off an MVP season.

However, who will win this big game? My apologies to my Baltimore brethren, but I must follow that one simple rule: Always bet on Brady.

Might not be pretty: There were a lot of people who were happy when the preseason was called off. Terrible games, right? Boring watches, correct? That’s all well and good, but you do realize that this week will be the first time this year that NFL teams have gone against people who aren’t their teammates?

Those of you who watch college football know it takes a couple weeks before teams really figure out who they are. Fortunately for the bigger programs, they get to experiment against inferior competition. Pros don’t get that luxury. You’re going against the best of the best. It’s not out of bounds to say the first couple weeks might be a rough watch.

Settle down, dude: Chiefs offensive lineman Laurent Duvernay-Tardif decided to opt out of playing in 2020, instead deciding to use his medical degree in the fight against COVID-19. Exactly the kind of selfless hero the world needs. We should all salute him.

But don’t worry, he’ll come back to the game. In fact, he recently said his plan is to rejoin Kansas City in 2021 and go for a three-peat championship. Hmmm, alright. Let’s not get ahead of ourselves. Don’t you know Tom Brady is in Tampa now?

Shutup, Skip: Dak Prescott did a courageous thing by opening about his mental health struggles, especially in the wake of his brother’s suicide earlier this year. And of course, things like this can’t happen without someone showing his ass in response.

Congratulations, Skip Bayless. Your first thought was how his off-the-field issues would affect his role as the starting QB for the Dallas Cowboys. You know, that’s the first thing that ran through my mind, too … said no one ever.

He is the law: The Giants have a new head coach in Joe Judge and he’s doing things his way. He recently made his squad restart practice after they had been at it for about 25 minutes. Apparently he didn’t like the effort being put forth.

“I love it,” running back Saquon Barkley told ESPN. “Coach didn’t like how we started off. We kind of started over, and as captains and as leaders, we had to step up to the challenge.”

This is all and good before the season starts. Let’s hope the Giants can get some wins in the early going, or we’re going to see a mutiny real soon.

Fans, or no fans? Several NFL teams won’t allow any fans at home games, at least in the early going. It’s definitely the safest move to prevent anyone from getting sick, especially at indoor stadiums. However, others will allow a few thousand people in and there’s really nothing wrong with that. If people can keep their distance and there’s fresh air, there shouldn’t be a problem.

Seahawks at Falcons: Russell Wilson’s MVP march begins here. Also, since I gave the Falcons no respect in my preseason predictions, I have no doubt that they will have a bounce back season.

Jets at Bills: Tom Brady has left the AFC East. Who will fill the void? Sam Darnold and Josh Allen get a chance to strike the first blow in the battle for supremacy.

Packers at Vikings: Another classic division battle. That’s all the analysis I have.

Dolphins at Patriots: Cam Newton’s debut! Too bad we won’t see Tua Tagovailoa starting opposite him, but that day is coming. Probably pretty soon.

Browns at Ravens: Cleveland took the opposite approach to this season than they did in 2019. They Browns decided to stop with the chirping and just prepare diligently for the season. Too bad they will most likely get stomped in their first game.

Buccaneers at Saints: If the Buccaneers are going to make the Super Bowl, they’re going to need to get past the Saints, who are all in for what could be Drew Brees’ final NFL season. Too bad New Orleans won’t have its patented loud Superdome crowd in attendance.

Cowboys at Rams: A very sexy Sunday night matchup. The Rams had a lot of offseason turnover, but they’re feeling good about themselves coming out of camp and they’ll be debuting their brand new stadium, which will be devoid of fans. Let’s see how they do against the now Mike McCarthy-led Cowboys.

Enjoy the start of the season!