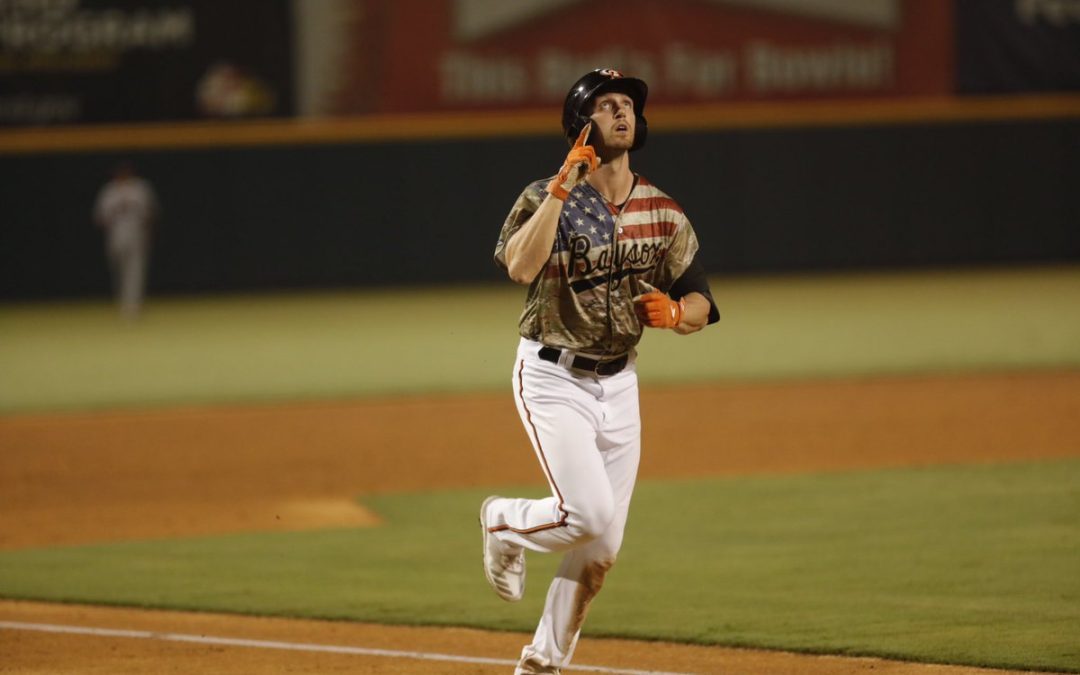 With the 2021 Minor League Baseball season now officially in the books, it’s time for us at On The Verge to hand out some awards. To highlight more than just the obvious top hitting and pitching prospect in the system, we put together our first annual end-of-year All-Star team to highlight the top statistical performers at each position in the Baltimore Orioles minor league system.

It’s important to reiterate…top statistical performers. This isn’t a top prospects list and prospect status played no role in deciding who made the final list.

Without further ado, your 2021 On The Verge Orioles MiLB All-Star team:

This one was pretty obvious. Rutschman finished his first full season of professional baseball with an .899 OPS, 23 home runs, 25 doubles, and 75 RBI while playing in 123 games between Double-A and Triple-A. The top prospect in baseball displayed elite defensive abilities behind the plate and received high praise from teammates, coaches, and instructors for his work behind the scenes. Orioles fans won’t have to wait long to see Rutschman at Camden Yards.

Undrafted in 2020 out of Radford (via Virginia Tech), JD Mundy exploded onto the scene with a 1.038 OPS, 4 HR, and a 13/17 K/BB ratio in 20 games with Delmarva before moving up to Aberdeen where he hit 11 home runs with an .881 OPS in 52 games with the IronBirds. The power-hitting first baseman earned a second promotion to Double-A but did not appear in a game with the Baysox after a hand injury ended his season early. The Orioles suddenly find themselves with a plethora of power-hitting first base prospects with Mundy leading the way.

Vavra played in just 40 games for Bowie due to a lingering back issue but he made the most of his time with the Baysox and very few second base prospects truly lit it up this year. Vavra slashed .248/.388/.430 with five home runs, a 15.8% walk rate, and a 130 wRC+ in Double-A, performing exactly as we hoped he would going into the 2021 season, even if it was in limited time. Jahmai Jones, Jean Carmona, and Frederick Bencosme were also in consideration here, but Vavra was a steady presence at the top of Bowie’s lineup when healthy and was on pace to come close to 100 walks across a full season.

Injuries and health issues decimated the 2020 draft class but Jordan Westburg did not disappoint at all in his first pro season and enters 2022 firmly in a position to become a Top 100 prospect in baseball. Westburg earned two promotions, ending the year in Double-A, and finished the season with a .285 average, .868 OPS, 15 HR, 27 2B, 5 3B, and 17 SB in 112 games across three levels. Defensively, Westburg was one of the more consistent defenders on the left side of the infield in the system. Can he crack the majors in 2022? Might be a bit of a long shot, but there’s no denying that Westburg is one of the more advanced hitters in this entire system.

Special. That’s the term we’ve used to describe Adley Rutschman and Grayson Rodriguez for a while now and after getting our first live looks of Mayo in 2022, we’re labeling Mayo as a special prospect down on the farm. The 19-year-old torched FCL pitchers with an OPS over 1.000 and four home runs in 26 games and continued to rake after a promotion to Delmarva where Mayo slashed .311/.416/.547 with 14 XBH in 27 games. Mayo brings a strong and accurate arm to the hot corner, elite exit velocities at the plate, and even went a perfect 11-11 in stolen base attempts in his rookie season. Again, he’s special.

An organizational-high 27 home runs, 23 doubles, an .898 OPS, and 73 walks in 124 games across three levels in 2021. That’s what Kyle Stowers did this season, a season that started in High-A Aberdeen and ended in Triple-A Norfolk. His season will continue for a few more weeks as he goes against some of the top prospects in the game in the Arizona Fall League. If you fixate on his strikeouts, you’re missing out on one of the more impressive seasons in minor league ball this year. Stowers has a chance to catapulte his way onto the major league roster soon with a good AFL and spring performance.

Look no further than the three outfielders on this list to see just how well this player development staff can develop hitters. Neustrom missed a big chunk of 2019 and then had 2020 wiped away, but put himself on the map with a full, healthy, and big 2021 at the plate. Neustrom showcased massive power from the left side, racking up 16 total home runs between AA/AAA, chipping in 31 doubles and 83 RBI in the process. The rise of so many mid-level outfield prospects like Neustrom has created a large amount of depth in the organization and it will be a lot of fun to see how it all shakes out.

“Tweener.” “Speedy fourth outfield type.” “Light-hitting defensive outfielder.” Those were some common terms and phrases used to describe Zach Watson since the Orioles drafted the outfielder out of LSU in 2019, but Watson made sure everyone knew that he can hit the ball just as hard as some of the top prospects in this system and when you talk about power-hitting Orioles prospects, you better mention Watson. He hit just .248 with a .294 OPB in 105 games between High-A/AA this season but Watson also recorded 21 home runs and 42 of his 99 hits went for extra-bases. Watson also swiped 24 bags. After a breakout campaign in 2021, Watson now appears poised to roam center field at Harbor Park in 2022 and has firmly placed his name into the conversation as a potential major league piece.

Three levels of minor league baseball. 49 extra-base hits. A combined .350 OBP. Clutch hits and key highlight-reel defensive plays in the Double-A playoffs to cap off the year. Those were just some of the highlights from Henderson’s first full season of professional ball, all while still not being able to legally walk into a bar and have a refreshing IPA. He doesn’t turn 21 until late June 2022. Henderson was every outlet’s pick as the prospect to watch in 2021 for the Orioles and his opposite-field strength and overall gameplay lived up to the hype.

Ask anyone who knows prospects who the top pitching prospect in baseball is and everyone will tell you it’s Grayson Rodriguez, except that one guy. You know who I’m talking about. Rodriguez went 9-1 with a 2.36 ERA, 0.83 WHIP, and a .159 average against in 103 IP across two levels (A+/AA). His 161 strikeouts were the sixth-most in minor league baseball and he was the ONLY qualified pitcher in full-season affiliate ball to have a strikeout rate north of 40% (40.5%).

Bradish logged just 13.2 IP in Double-A (0 ER, 26 K/5 BB) before being promoted to Triple-A where it was a mixed bag of results before closing out the year on a dominant, month-long stretch (30 IP, 5 ER, 30 K). Overall, Bradish logged 100.1 IP and fanned 131 hitters while holding a 3.68 ERA in 24 total outings. Only Grayson Rodriguez had more strikeouts in the Orioles system in 2021. Bradish put himself into a position to claim a major league rotation spot in 2022.

Do the Los Angeles Angels get a ring when Baltimore brings home a championship in the next few years? Because the Orioles raided the Angels for some serious pitching prospect talent over the last year or so, with Zach Peek being another highly overlooked name in this system. Peek pitched across two levels in his first pro season, going 6-3 with a 3.80 ERA, 1.37 WHIP, and 122 K in 90 IP. Just in Aberdeen, Peek went 4-0 with a 3.22 ERA and a 58/14 K/BB ratio in 44.2 IP. You can check out our recent interview with Peek here.

Another former Angel on this list, and not the last. Brnovich started his first pro season in High-A and ended it in Double-A, going 6-2 with a 3.32 ERA, 1.03 WHIP, a .201 BAA, and a 123/26 K/BB ratio across 95 innings. Only Rodriguez and Bradish finished with more punchouts. The former Elon standout carved his way through two levels with one of the top weapons in the system, his knuckle-curve.

Pinto shook the rust off from a long layoff by first cruising through the FCL before exploding onto the scene in Delmarva and skyrocketing up our Top 50 prospect list. Thanks to a dominant 2021 and some more info we’ve received, expect a bigger jump on our list in 2022. In total, Pinto logged 66.2 innings between the FCL/Delmarva, striking out 84 hitters and owning a 2.30 ERA, 0.86 WHIP, and a .171 BAA. There’s a ton of talent packed into his 5’11” frame.

Baumann had a delayed start to his season and tossed a few rehab outings in Delmarva before really getting his season going in Double-A as he slowly worked his way back from an Alternate Site injury late in 2020. Once “Big Mike” regained his confidence, you could see the switch flip on the mound. Across three levels, Baumann finished with a 4-3 record, 3.44 ERA, 1.15 WHIP, a .189 average against, and a 71 strikeouts in 70.2 IP. He made his MLB debut late in the season after posting a 2.00 ERA across six Triple-A starts and will enter 2022 as a favorite to land a rotation spot.

On the day the Orioles signed Brandon Young after the 2020 draft, I said that this was a great signing and Young was going to make some noise very early on. He did just that in 2021. Across two levels, Young struck out 114 hitters in 84.1 innings, working a 3.52 ERA and a 1.21 WHIP with the Shorebirds and IronBirds. Young pitched his best when it mattered the most, closing out the year with a 2.90 ERA across his final nine starts with 48 strikeouts in 34.1 innings. Internally, the Orioles are high on Young and it’s very easy to see why.

Originally signed in 2013, four years in Single-A ball, no 2020 season. Formerly a Top 30 prospect, it seemed as if the door was closing on Peralta’s time in Baltimore. However, Peralta shut that idea down with a good 2021 season and even earned a new contract for 2022. Peralta went 9-4 with a 4.73 ERA between Bowie and Norfolk, striking out 98 across 93.1 innings. One thing was very clear when watching Peralta pitch this season, he’s made significant improvements overall and will get a big league opportunity in 2022.

Bautista put himself firmly on the map in 2021, pitching across three levels and ending the year in Triple-A where he finished the season just as he began, dominant. Bautista logged 46.2 innings out of the bullpen, striking out 77 hitters with a combined 1.54 ERA, 1.07 WHIP, and a .126 average against. He finished second in the organization with 11 saves, finishing behind only Bowie’s Diogenes Almengo, who was also strongly considered for a spot here.