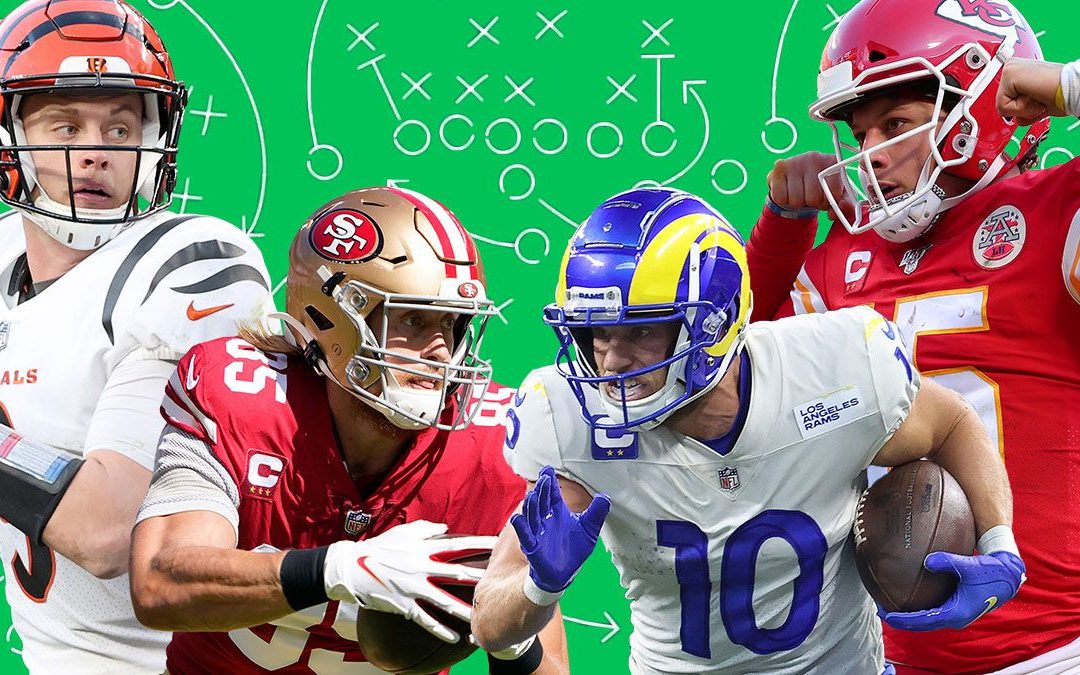 At this time last week, I was salivating. We were going into the divisional round – the best two days of the year – and my excitement level matched how I feel when I have two cups of coffee too many.

And unlike most times when I get pumped for something, last weekend actually lived up to the hype. Four games, four amazing finishes. Wow.

But as I sit here today, things are looking down. We’re just a couple sunrises from Championship Sunday, but there’s a sadness building. The type of malaise that hits me about an hour after I’ve had that second cup of coffee too many.

Why? It’s simple. This is the last true meaningful weekend of the 2021 football season. There’s the game that shall not be mentioned next Sunday (ugh) and then of course, the Super Bowl seven days after. But that’s more of a spectacle than a true soup-to-nuts football contest. Too many amateurs and non-fans join the ranks of us diehards. People more concerned with the commercials, the halftime show and quality of the crab dip.

It’s kind of a bummer.

So, let’s enjoy this while we can, eh? In honor of Championship Weekend, here is this season’s final installment of Shoutouts and Bow Outs.

It’s one thing to be a cocky kicker. It’s another thing to be that way during your rookie season. This young man has some serious moxie. With the score tied late in the fourth quarter in Tennessee, the Bengals set McPherson up for a potential game-winning kick with seconds left.

“That’s a kicker’s dream,” McPherson said, “to have the game on your shoulders.”

We can discuss what other things kickers dream about later. The first-year leg man nailed the 52-yard attempt as time expired and launched Cincinnati to the AFC Championship Game and its first road win ever (!!) in the postseason.

But that’s not all. According to QB Joe Burrow, McPherson all but guaranteed he would split the uprights before going on the field, saying, “looks like we’re going to the AFC championship.”

See? Serious moxie. It’s a great story … and one we wouldn’t have heard had Sir Evan pulled that wide left.

We all saw what happened on Saturday night. The Packers had a punt blocked in the fourth quarter and went on to lose to the 49ers at Lambeau Field, sending Aaron Rodgers to yet another unexplainable playoff defeat. That’s when the Schadenfreude Olympics started. People who had been waiting for months to unleash their best social media cutdown of the enigmatic Green Bay quarterback got their moment.

And holy cow, what a letdown. Nine of every 10 “jokes” were so hacky, they would get booed during open mic night at the local Chuckle Hut. Just an unfunny hodgepodge of garbage involving doing research, immunizations, shots and the like. And within minutes, the whole exercise was boring.

I don’t care for Twitter dogpiles, no matter what I think of the person being lampooned and mocked. But give me something unique and truly witty and I’ll laugh. Instead, I found myself rolling my eyes and groaning.

I’ve made no secret of my Ram fandom. But Sunday afternoon surely took 10 years off my life. I always felt I’d be happy if I could reach 95 years old. Now, the best I can hope for is 85.

One can never feel comfortable if the other team has Tom Brady. And with L.A. driving for a possible touchdown that would have made the score 27-3 at halftime, Cousin Sid was feeling pretty good. The only thought in my head was, “just don’t turn the ball over and everything will be fine.”

We all know what happened. Cam Akers put the ball on the rug at the 1-yard line and the Rams kept turning it over in the second half via a comedy of errors. And when Leonard Fournette — he of Playoff Lenny fame — tied the game with less than a minute remaining, my hands were shaking. My breath was short. My armpits were soaked. It was surreal.

And just when I was resigned to be yet another notch in Brady’s Break Your Heart belt, Matthew Stafford — he of sTaFfoRd CaNt wIN in THe pLaYoFFs fame — kept me from going into the light by hitting two clutch passes to Cooper Kupp and setting up the game-winning field goal.

Kudos to the Rams. And kudos to my ticker for holding up.

I was so close to being a genius. Stupid Tennessee.

The Titans had a home game after a week off to prepare and get healthy. They got stud running back Derrick Henry back in the lineup. They sacked Joe Burrow NINE times. And for all that, they scored 16 points while Ryan Tannehill threw three interceptions.

My dream of being the guy who picked the Titans to reach the AFC title game went up in smoke. And for all those people wanting the team to rid themselves of the troublesome Tannehill, good luck with all that. He carries a massive salary cap hit. He’s not going anywhere.

There are people who don’t care for sports. Those people are dumb. Where else can you get this kind of entertainment for free? The Bills-Chiefs game on Sunday night was so breathtaking, I can’t find air anywhere.

Josh Allen was amazing. Gabriel Davis entered Jerry Rice territory without four touchdown catches. Tyreek Hill might be the fastest human to ever put on pads. The crowd at Arrowhead Stadium was dialed in. Even the announcers – Jim Nantz and Tony Romo – couldn’t contain themselves.

And Patrick Mahomes? There’s no way one can be surprised by his brilliance anymore. My brother-in-law texted me when the Bills went up by three points with 13 seconds left in the fourth quarter, saying that he couldn’t believe what he saw. My response:

Am I that smart? No. Did I actually believe he would get into field goal range in that amount of time? I couldn’t rule it out. And that’s why the Chiefs quarterback is a once-in-a-lifetime kind of player. He brings out the kind of doubt in opponents that I’ve only seen from Tom Brady.

And after Kansas City won in overtime, I could only sink into the couch and exhale. This is why sports are great. Specifically, this is why the NFL is king. Unbelievable.

The last time Brady lost in the divisional round was 2010. I still don’t know how Sunday happened. I almost refuse to believe it.

So long, for now: Sean Payton, after 15 seasons, a Super Bowl win, a controversial suspension and more than one heartbreaking playoff loss, has stepped down as coach of the Saints. And no matter what you think of him as a person, you can’t deny that he’s been a resounding success. His record of 152-89 is a testament to that.

Yeah, right: Speaking of Dallas (out of nowhere, I know) … the Cowboys have assured head coach Mike McCarthy that he will return next season. I don’t believe it, but fine. Payton can take one season off to realize he’s sick of being around his wife, errr, rediscover his love for the game. And once McCarthy messes things up again – and he will – Sean will be there to bring the Cowboys back to true prominence.

Same old, same old: Antonio Brown said more crazy things this week. Now he’s apparently hellbent on suing the Buccaneers for defamation. I would update you further on the situation, but you don’t care. And neither do I. Let’s just close our eyes, stick our fingers in our ears and pretend we don’t notice him.

Both conference championship games are rematches. The Bengals took care of business on Jan. 2, beating the Chiefs at home 34-31. Now, Kansas City gets a turn in its own building.

Burrow spent most of last weekend on his back before breaking Tennessee’s hearts. On Sunday, he faces a Chiefs defense that doesn’t have a ferocious front four like the Titans. When these two teams met the first time, Burrow tuned up Kansas City with 446 passing yards, 4 touchdown passes and a 148.0 passer rating. And while it’s hard to imagine he’ll pull off those numbers again, he should be able to move the ball with ease. And it should be even easier if Chiefs safety Tyrann Mathieu, who suffered a concussion in the divisional round, isn’t patrolling the secondary.

Some people might think the young Bengals might choke in the spotlight. Shrink under the expectations. I’ve said it about this team before: Sometimes you don’t know enough to know to be nervous. This team is playing with house money after snapping years of playoff futility. No matter what happens, their fans will view this season as a success. I doubt they’ll be tight.

The Chiefs, meanwhile, are coming off an emotional overtime win, but don’t expect a letdown. After scoring 42 points in back-to-back playoff games, they’re just one step away from getting back to the Super Bowl. If they trade touchdowns with the Bengals on Sunday, they’ll be in good shape. Those types of games always default to the home team.

However, if the Bengals are able to force some turnovers – which they’ve been able to do as of late – they’ve got a shot at the upset. I just don’t think that’s going to happen.

Kyle Shanahan owns the Rams. He’s in Sean McVay’s head. San Francisco fans are going to swarm SoFi stadium on Sunday. The sea of red will drown Los Angeles and it will be THEIR house.

“I don’t give coaches that much credit,” Shanahan said when reporters asked him to respond after McVay said that no, Kyle was indeed NOT in his head.

That was a perfect answer. Because it’s true, even though the 49ers have won six straight games over their division rival. The head coaches will play their role, of course, but this game is about matchups. And that’s where the bad news for Los Angeles comes in.

The 49ers are a matchup nightmare for the Rams. People like to say that L.A. is a finesse (a term I hate) team, but that’s not true. When they run the ball, they can be as physical as anyone in the league. But on defense the Rams – despite being in the top 10 against the run – have had trouble stopping that Shanahan ground game, which can be run out of multiple formations. In fact, the 49ers averaged 145 yards rushing over the two wins this season. Stopping, or at least slowing, that attack is paramount. If the Rams can make Jimmy Garoppolo face something other than short yardage on third down, they can pin their ears back on the pass rush and cause problems.

On offense, it’s simple. TAKE CARE OF THE BALL!! And while Stafford has thrown 6 touchdowns without an interception this postseason, it was worrying to see his teammates struggle with ball security last week. If Stafford is accurate, the offensive line doesn’t snap the ball over his head and the running game does what it’s capable of, the rest will take care of itself.

Forget about who is in who’s head. Forget about which team’s fans dominate the stands. It doesn’t matter. If you take care of your assignments, it makes no difference if you’re playing at home or on the road. That being said, I’m an optimist in life and the worst kind of pessimist in my sporting fandom. So, it makes the choice for Sunday pretty easy.