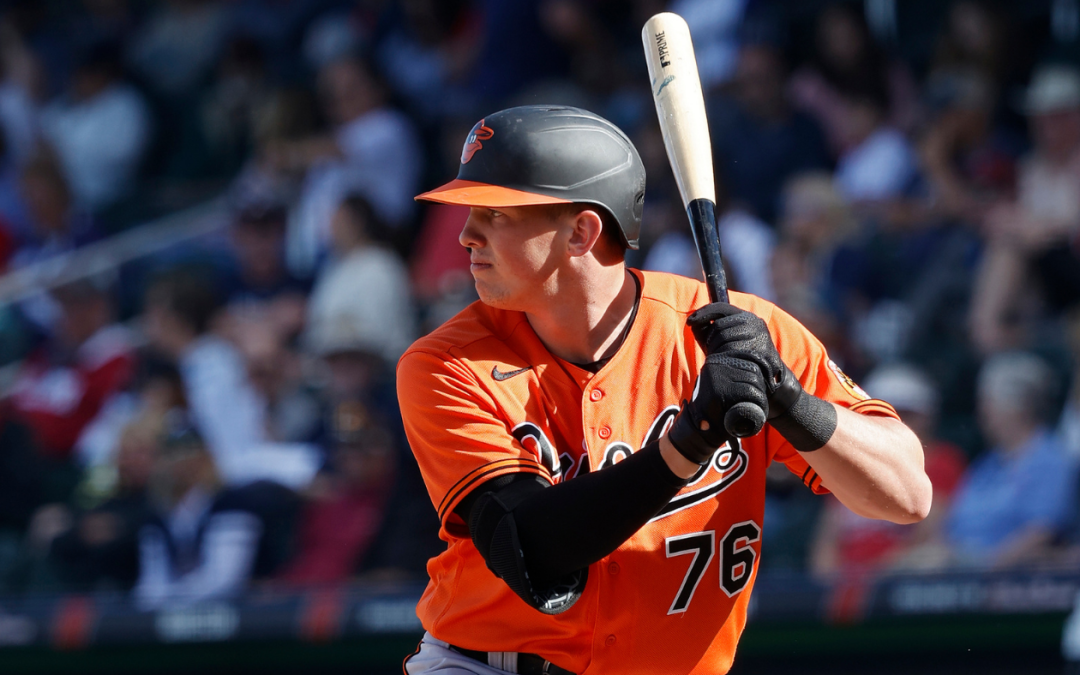 The 2021 Minor League Baseball season gets underway Tuesday, meaning that some of the Baltimore Orioles’ top prospects will soon take the field. When they do, it will mark the beginning of a season that should answer questions about the state of the Orioles rebuild—and the prospects expected to play crucial roles in the organization’s push to build a competitive major-league team.

A few circumstances make the 2021 MiLB season unique. Across MiLB, organizations are coming off the loss of the 2020 season amid the COVID-19 pandemic and an offseason takeover by MLB that resulted in about 40 teams losing their major-league affiliations. For the Orioles, one of the challenges will be seeing how their top prospects—several of whom have joined the organization in the past year—adjust after a long layoff.

With that in mind, here are six questions to consider for the upcoming MiLB season as it relates to the Orioles. While they by no means cover every nuance of the season, these questions can prompt discussion about the organization’s top prospects, some of the Orioles’ most recent acquisitions, and how the rebuild will proceed over 2021.

How far will Adley Rutschman go?

As the consensus top catching prospect in baseball, Rutschman enters 2021 with plenty of hype. The loss of the 2020 season means that Rutschman still has just 37 professional regular-season games under his belt, but the number-one pick in the 2019 Draft is still regarded as a player who will move through the minors quickly.

Rutstchman will start the year at Double-A Bowie, where he will have a chance to work with some of the Orioles’ top prospects, including fellow former first rounder DL Hall. Provided that he adjusts to Double-A pitching as a hitter, Rutschman will likely crack Triple-A Norfolk’s roster later this summer. A promotion to Triple-A would likely accelerate calls from the fanbase to promote Rutschman to Baltimore before year’s end but expect the Orioles to be reluctant to start his service time clock this summer, especially if he has a high workload over his first full season.

Even in that scenario, Rutschman would set himself up nicely for an early 2022 MLB debut. While it will take time for him to arrive in Baltimore, the fact that Rutschman is just down the road in Bowie should excite Orioles’ fans—especially if they happen to watch the Baysox on a night where Rutschman is behind the plate with Hall on the mound.

Is the Gunnar Henderson hype for real?

Outside of Rutschman, no position player in the Orioles’ farm system is drawing more hype than Gunnar Henderson—a shortstop chosen out of high school in the second round of the 2019 Draft. Although the 19-year-old has played just 29 professional games, all in the short-season Gulf Coast League, he enters 2021 as a prospect on the rise. Baseball America recently added him to its Top-100 Prospects list, and he looked good with the Orioles over a limited stint in spring training.

Part of what is driving the excitement for Henderson is his performance at the alternate site in Bowie last summer, where he reportedly looked good against older competition. While those reports should be taken with a grain of salt—we did not see Henderson for ourselves, and do not know if the alternate site was enough to makeup for a lost 2020—the evidence we have suggests that the Orioles have an intriguing player on their hands. Henderson posses a smooth left-handed stroke at the plate and a strong arm in the field, meaning that he could slide over to third base if outgrows shortstop. (He’s currently listed at 6’ 2”, 210 lbs.)

Henderson is starting 2021 at Low-A Delmarva. Given his age, it would not be unusual to see him spend all season there, but his talent level suggests that a move up to High-A Aberdeen during the season is possible, if not likely. For a player with such limited experience, Henderson is drawing a lot of attention, and his 2021 performance could prove why that is the case.

How will DL Hall and Grayson Rodriguez perform?

The top two pitching prospects in the system will begin the year at different levels, with Hall in Bowie and Rodriguez at Aberdeen. They are pitchers with two distinct profiles, but both are seen as equally important to the Orioles.

Hall, who was drafted out of high school in 2017, has never thrown more than 94 1/3 innings in a single year. Pushing him to match or exceed that number might be a tough task this year, but the hard-throwing lefty could still show improvement by cutting back on his walks. (He enters this year with a career 5.1 BB/9 rate in 185 1/3 innings.) If he does that, Hall will likely end the season as one of the best—if not the best—left-handed pitching prospects in baseball, as a southpaw with a mid-to-high 90s fastball that commands his secondary offerings well enough to stick in a major-league rotation is a rare find.

Rodriguez, for many, became the best pitching prospect in the system after his dominant 2019 in Delmarva. There was speculation that the right-hander would begin 2021 in Bowie, despite the loss of the 2020 season, but the 21-year-old will instead report to Aberdeen. Outside of some concerns about his delivery, few question marks surround Rodriguez at this point. The Orioles should be patient with both pitchers this year, but it is easy to imagine Rodriguez joining Hall at Bowie before too long if he gets off to a good start at Aberdeen.

Which players could make an impact in the majors in 2021?

Though we are just weeks into the MLB season, the Orioles have already had five players make their debuts. Among that group was Zac Lowther, who is expected to pitch in Norfolk’s rotation after making his first major-league appearance on April 25. He and fellow left-hander Alexander Wells will start in Norfolk after being added to the 40-man roster over the season, putting them in a position to join the major-league rotation or bullpen later this year. Also added to the 40-man roster over the offseason was right-hander Isaac Mattson, a reliever who will begin the year in Norfolk.

Norfolk’s roster also features several intriguing position players. Jahmai Jones could play his way into second base at the majors, especially if he adjusts to the position defensively. Rylan Bannon and Tyler Nevin should also get major-league time this year, as both players offer patient plate approaches and versatility in the field (and at different positions, as Bannon primarily plays second base and third base, whereas Nevin has logged extensive time at first base, third base, and left field). The position player drawing the most curiosity, however, is Yusniel Diaz. The centerpiece of the Manny Machado trade with the Los Angeles Dodgers back in 2018, Diaz needs to prove that he can stay healthy if he is to crack the major-league roster in 2021. If he can stay healthy and productive, Diaz’s powerful outfield arm and solid plate approach should earn him a look in Baltimore this year.

Of course, some Triple-A players are trying to work their way back to the rosters. After his struggles in spring training led to him being assigned to the minors, Keegan Akin will need to regain his form and improve his command on the mound. Ryan McKenna, meanwhile, will try to take advantage of regular at-bats in Norfolk and earn a more thorough look in the Baltimore after receiving sporadic playing time in the majors in April.

What are the early returns from recent trade acquisitions?

Since the 2019 season ended, the Orioles have acquired numerous prospects that have yet to play an official game in their farm system. Nevin joined the organization last summer from the Colorado Rockies, when he and Terrin Vavra were part of a package acquired for reliever Mychal Givens. Vavra, an infielder who won South Atlantic League MVP honors at Low-A Asheville in 2019, will start 2021 at Bowie and is regarded as a fundamentally sound player with a disciplined, line-drive oriented approach at the plate. Jones is also making his debut in the Orioles’ system, as he was acquired from Angels in February in exchange for Alex Cobb.

The Angels have become a frequent trade partner for Orioles GM Mike Elias, as he acquired four pitchers for Dylan Bundy in 2019 and picked two hurlers for shortstop Jose Iglesias during this past offseason. Mattson is the closest to the majors of the players acquired for Bundy, but the most highly regarded of the bunch is right-hander Kyle Bradish. Bradish, who BSL ranks as the 20th-best prospect in the O’s farm system, will start 2021 in Bowie and could see his stock rise considerably this year, especially if the recent reports surrounding his improvement translate to in-game success.

Garrett Stallings is the most intriguing of the two pitchers acquired for Iglesias. If the pinpoint command he showed during his collegiate career at University of Tennessee translates to the professional ranks, he could be successful despite his lack of premium velocity. He will start this year in Aberdeen. Kevin Smith, acquired from the New York Mets for reliever Miguel Castro last August, will start the year at Bowie and look to repeat the results that made him a breakout prospect in 2019.

What to expect from the 2020 Draft class?

Three of the Orioles six draft picks from 2020 will start this season at Delmarva. Jordan Westburg and Anthony Servideo are part of a talented infield that the Shorebirds will boast this season. Both were primarily shortstops in college but will need to get looks at other positions to ensure that they, along with Henderson and 2019 fifth-round pick Darell Hernaiz, receive regular at-bats. In the outfield, the Shorebirds will feature Hudson Haskin, a centerfielder chosen out of Tulane in the second round. As college hitters, all three should be able to handle Low-A pitching, though we do not know yet if they will experience any adverse effects from last year’s layoff.

Fourth-rounder Coby Mayo is not starting the year on a full-season roster and might not reach Delmarva until this summer if he even does appear at the level in 2021. Still, even if Mayo spends the year in the GCL, his power at the plate will make the young third baseman worth watching.

Two players are being held back because of injuries, but their cases are entirely different. Outfielder Heston Kjerstad is reporting to Sarasota to buildup strength after a bout of myocarditis. Kjerstad—the second-overall pick in last year’s draft—was only recently cleared to begin work at the alternate site, and the Orioles are emphasizing that they undertake a gradual process in building back up his strength. For now, his timeline for getting back into game action is uncertain, but the good news is that Kjerstad appears to be making progress after a serious health issue.

Carter Baumler, a high-school pitcher chosen in the fifth-round last year, is expected to miss all of 2021 after undergoing Tommy John surgery last fall and will look to return in 2022. While it is unfortunate that the right-hander will not appear in game action this year, he is just 19-years-old, and will hopefully make a smooth recovery from his injury.