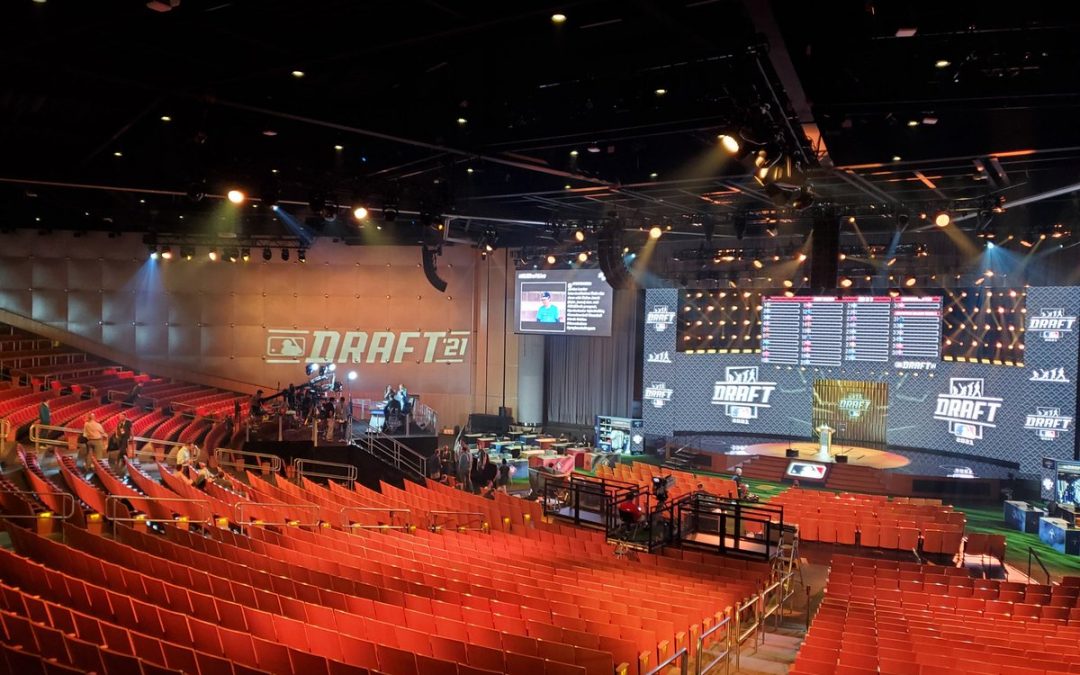 6:30 PM: Hello all! For draft night this year, I’ve decided to as much as possible live update this article with my thoughts and reactions as the picks roll in. There will be a little gap beginning at 8:30 when I join the On The Verge Podcast, so feel free to join us there for more reactions.

6:31 PM: Because I’m me and I am always wanting to tinker with the scores, I’m running one final run of the DRAFT Model scores right now. This last run accounts for Baseball America’s updated top-500 as a few players, including my 37th-ranked player Joshua Hartle, have withdrawn from the draft.

6:40 PM: So, updating this is taking longer than I thought. I can only run scores for players with an MLB Advanced Media ID number, and about a dozen guys in Baseball America’s Top 500 got their ID numbers in the past few days. So, bear with me here.

6:53 PM: Finally have the newest, and final, DRAFT scores for the 2021 MLB Draft. No movement at the top, or really many other places either.

6:55 PM: So 5 minutes before ESPN’s coverage starts, what would I like to see tonight for the Orioles? I just want the team to add talent to the system. It’s a cop out answer, but it’s true. There are routes I’d definitely prefer naturally. I’ve made it no secret my excitement about the prep shortstops who would likely be available at #5 in Kahlil Watson and Brady House. I’d be excited if they took one of the Vanderbilt arms. If they go underslot, there are a few guys I like but particularly Colton Cowser. The team has lots of options available at #5, and I don’t think many of them are bad.

7:06: Callis is breaking that Louisville catcher Henry Davis is going 1-1 to Pittsburgh.

7:08: With Davis going at 1-1, things honestly get pretty interesting real quick. Some implications may be that the Orioles suddenly have a shot at Jordan Lawlar, depending on what Texas does at #2.

7:19: Now I’m really interested in what Texas does. I think Mayer is the best player in the draft, but most mocks didn’t have Texas having a shot to take him. So, do they like him better than local product Lawlar or Jack Leiter?

7:20: Texas takes Jack Leiter. Now the onus really hits on Boston. Most mocks had them on Leiter or Davis. Leiter’s score of 33.86 was one of the highest the model had on pitchers.

7:25: A quick check of the scores shows that Stephen Strasburg is the only player to beat out Jack Leiter’s score. Strasburg had a score of 37.60 in 2009.

7:26: Reports have the Tiger’s sticking with Jackson Jobe at #3 over Marcelo Mayer.

7:30: Assuming the Red Sox take Mayer, that would sting a bit. I think he’s the best player out of this draft, #1 in my model. Kiley McDaniel views him as the most polished of the four prep shortstops at the top.

7:35: Reports have the Orioles going Cowser. I can work with this!

7:39: Well, at least I know I’ll be spending the rest of the evening thinking about where the Orioles will spend the extra money. I’m actually very fine with this result, though I know that there are many people who will be upset that the team went underslot. Let’s wait to see what happens at #41.

7:44: On random side notes, I wouldn’t recommend trying to prep for the draft or anything for that matter when dealing with poison ivy. Not fun.

7:50: Rumblings are that the Royals are going to get weird…Frank Mozzicato, prep LHP from Connecticut.

This one is a surprise, but if you believe in the guy you’d have to take him here, because he’d likely not make it past #30.

7:55: Even though I’m typing the times, I can’t believe an hour has already flown by. Going to have to carefully watch the time so I don’t miss the podcast.

7:57: Since I’m actually being on Twitter for an extended period of time the first time in forever, time to update the profile bio.

7:59: Benny Montgomery is the report here. Baseball America was the low outlet on him, and his DRAFT Model score suffers accordingly.

8:05: Not a lot of consensus on the Angels right now. I have a feeling this will be a theme for teams on the night.

8:20: I’d like to get a couple more picks in before I have to go, but we’ll just have to see how long this Leiter interview goes.

8:25: Okay, I’m going onto the On the Verge podcast now. I’ll update when I can, and will be back afterward!

9:42: Lots of great discussion on the On the Verge podcast, including players who the Orioles might try to float down to #41. I’ve got my eye on the two Clemson football players, Bubba Chandler and Will Taylor. Also Carson Williams.

9:59: The Twins are about to take Chase Petty, a prep pitcher who has run it up to 102 MPH. He came in 27th in my model, but I would say he has some of the highest variance in the draft.

10:03: Elijah Green is the big name right now for next year’s draft. I’m going to try and see if I can quickly put together an initial score for him. Here’s a video in the mean time.

10:07: While I’m working, Kevin Goldstein says the price for Chandler is rumored to be $4M. If the Orioles save, say, $1.2M with Cowser they’d have $3M which would be a little short.

10:13: Time to see what my former employers do! Several familiar faces in that room.

10:30: The Reds’ comp pick goes to Jay Allen, 43rd in my model, though I’d say there’s a solid chance he does better than this.

10:32: Marlins take Joe Mack. Surprising somewhat. Mack was expected to go in the 20s, so the Marlins will have to overpay two guys ostensibly.

10:38: Ty Madden has been sitting for a while. Teams have concern about how the fastball plays, but at this point this is a great value. Madden’s DRAFT model score was 15.42 for me, 15th overall.

10:40: Let’s start thinking about tomorrow. The Orioles have an opportunity to go overslot at 41, and two of my interesting guys are there in Bubba Chandler and Will Taylor. James Wood, Izaac Pacheco, and Joshua Baez are big power guys who could also fit the team’s profile. Anthony Solometo is a prep pitcher who could also be interesting at that slot.