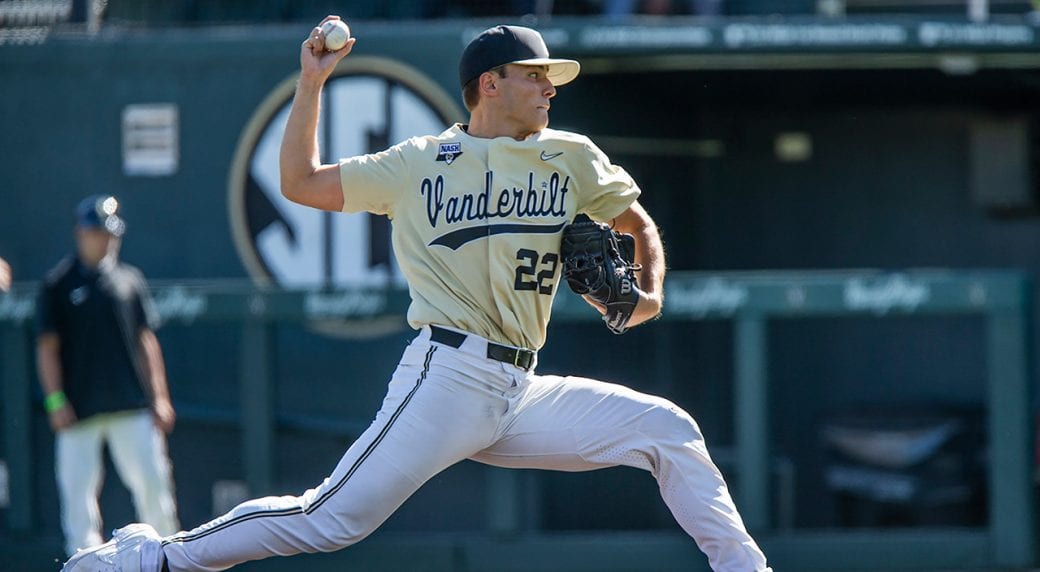 Two months ago, college baseball kicked into gear as did my draft mind (After a few months hiatus). There was much joy that college baseball was back, as well as anticipation for the stars that would inevitably emerge. The debates raged (At least in my mind) about Kumar Rocker’s stuff and Jack Leiter’s pitchability. Could Matt McLain build on summer wood bat numbers that looked like they came from a video game? And what would the Orioles do with another high draft pick at #5?

College baseball has began to answer those questions, but those answers have come with another round of unknowables. What happened to Alex Binelas’ bat? Where the heck did Luca Tresh come from? And will anyone ever slow down Jack Leiter again?

As we come to the midpoint—at least back when the draft was in June—the DRAFT Model has had to make adjustments. For those who are new here, the DRAFT (Data-Reasoned Amateur Future Talent) Model takes into account biographical details, player evaluations, and collegiate statistics to predict a player’s positional profile, probability of reaching the majors, and production should they reach the majors. All this is rolled in the DRAFT Score.

In the latest update, the model has of course updated the college’s season statistics. However, I’ve also made a few adjustments to the model’s statistical underpinnings as well, and more are to come. But before we see the updated Top 100 players, let’s see who the biggest gainers and losers were from the past month.

No, the biggest riser hasn’t been Jack Leiter but another SEC righty. As unhittable as Leiter has been, Hoglund hasn’t been far behind. In 43 innings, Hoglund has struck out 70 while only walking 11. His masterpiece thus far was an 8-inning, 13-strikeout performance in a 1-0 victory over Auburn. All this has resulted in Hoglund’s DRAFT Model score jumping up 9.5 runs to 21.85. This vaults him from 19th to 7th overall.

Hoglund uses his low-to-mid-90s fastball well and effectively pairs it with a not-quite-plus slider. Both offerings play up due to his plus command. He wasn’t as sharp in his most recent start against #10 Florida, making his start this Friday night against #1 Arkansas (Available on the SEC Network) very important to his rising draft status.

Coming into the season, Davis was the clear #2 catcher behind Miami’s Adrian del Castillo. Two months of raking by Davis and a slight downtick in power numbers from del Castillo have now brought the question of the draft’s #1 backstop to debate.

Davis slashed .376/.481/.624 over 100 PAs this year, and has even improved in his defense, lowering his passed balls from 6 in 14 games last year to just 2 in 25 games this year. Pair that with a plus arm—he’s caught 50% of basestealers on 16 attempts—and Davis will be able to stay behind the plate.

Davis saw his score jump 8.1 runs from 15.1 to 23.2, moving him up 5 spots to 5th overall. The second half of the season will see Davis face stronger ACC competition, with series against #18 Florida State, at Virginia, and #17 Pittsburgh being on the April slate.

Coming into the season, I would’ve questioned Bachman’s statistical profile. He put up big numbers, but against the Mid-American Conference. But at a certain point you just can’t deny numbers no matter who they are against. At some point, a 39% strikeout percentage and 2 earned runs is just good.

Watch the video and you can’t help but notice the low-3/4 armslot that generates a fair bit of tail on his fastball, which maxes in the mid-90s. His two secondaries, a slider and changeup, work well enough to generate swings and misses. Bachman’s score jumped nearly 8 runs to 14.04, good for 16th overall.

In an odd twist, Bachman has acted as Miami’s Saturday starter in recent weeks. But all the draft-heads will be watching Bachman the weekend of May 14-16, as Miami plays West Virginia in what will be his only regular season appearance against a major-conference team.

There are jumps in score and then there’s Luca Tresh. His raw score increased by 7.5 runs over the past two months, but to really appreciate it you have to consider where he came from. Tresh started the season with a score of 0.87, good for 139th out of approximately 190 players. His new score of 8.43 is 37th, moving up a whopping 102 spots.

How did we get here? Tresh has hit incredibly well from a rate perspective, with ISOs of .304 and .285 in his Freshman and Sophomore years. However, these only came in a total of 74 plate appearances. In 81 plate appearances this year, he has gotten even better, slashing .328/.383/.671 for an ISO of .342. Even better, he’s doing all this with a relatively reasonable BABIP.

Tresh will have some questions to answer, as he has cooled down considerably over the last month. Since missing a series with Duke in early March, he has only batted .220 without a single home run. With the remainder of the season featuring series against #13 Virginia Tech, #17 Pittsburgh, and #18 Florida State, Tresh will have to work hard to capitalize on his hot start.

He’s actually only the 9th-biggest riser, but how could we not talk about the pitcher who has generated the most attention placed on college baseball in recent memory. 16 no-hit innings will do that.

At this point, Leiter’s numbers are just absurd: 0.43 ERA in 42 IP. A 46.1% strikeout percentage. 10 hits allowed. He’s faced elite competition in Oklahoma State and then no-hitting South Carolina. So with all this, the question isn’t how he rose, but maybe why he hasn’t rose more?

Leiter’s score jumped 5.5 runs to 18.84, moving up 5 spots to 9th overall. What’s “holding him back?” From a model perspective, he hasn’t pitched enough; he’s totaled 57.2 collegiate innings. A mechanism of the model takes into account how many innings a player has pitched in his college career when working with his adjusted statistics. It’s mostly there to keep players who struck out the side in a single inning from dominating the board. As Leiter accumulates more innings this adjustment will fall away, meaning that Leiter will continue to rise up the boards even as he faces tougher competition as the season goes along.

To close out the big movers, here’s a few little notes on other noteworthy risers or fallers in the model.

With that, here’s the new Top 100 from the DRAFT Model. I haven’t had a chance to make changes to the full results on my website, Sabermetric Sandlot, but those changes should hopefully come in the next few days.