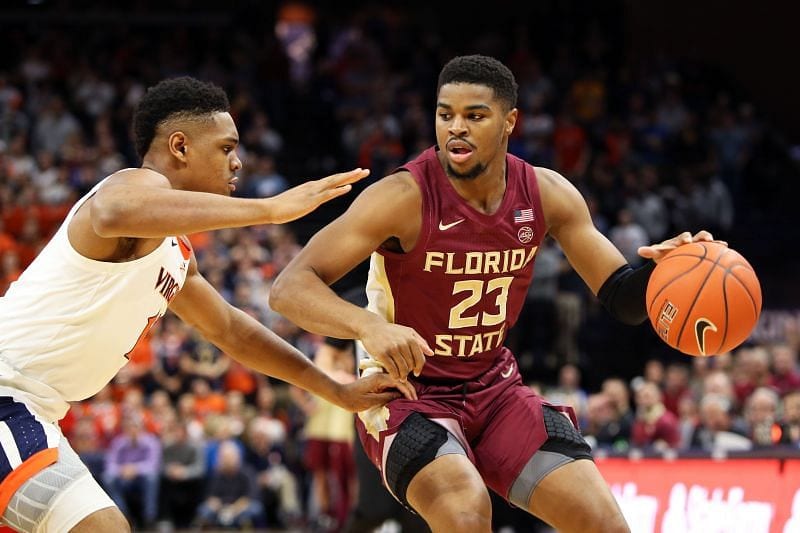 In a year where the Terps were both 1-5 and 4-9 in Big Ten play, it was reasonable to think it was hopeless for Maryland men’s basketball to make the tournament. However, a resume highlighted by a win over NCAA tournament #1 seed Illinois and #4 seed Purdue meant a 9-11 B1G record combined with their B1G conference tournament win against Michigan State earned them a chance to go dancing.

Let’s review the East region, where Maryland will be fighting with 17 other teams to make the Final Four.

After a solid but unspectacular first year of the Juwan Howard tenure that BracketMatrix.com projected as a #6 seed, the Wolverines returned to the level of success they enjoyed in recent years under John Beilein, winning the Big Ten regular season title. When he isn’t busy creating beef with Maryland, freshman Hunter Dickinson has been the leading scorer for Howard’s team with 14.1 points per game against conference foes. Michigan is ranked in the top ten on Kenpom for adjusted offensive and defensive efficiency, showing their balance as a team.

Mount St. Mary’s is one of three local terms in this region and is enjoying its third tournament appearance since 2013-14. The Mountaineers are one of the best teams in the country at limiting the shooting percentages of their opponents, ranking 14th in the advanced stat eFG%. Meanwhile, Texas Southern is celebrating its fifth NCAA tournament appearance since 2013-14. The Tigers have earned a reputation for being willing to fill their out-of-conference schedule with major programs, including Oklahoma State this season and Gonzaga in both 2019-20 and 2018-19.

The Tigers will be familiar to Maryland fans, having knocked the Terps out of the tournament with a last-second 69-67 win in 2019. That LSU team was a #3 seed, so this year’s team is a weaker squad. The Tigers are fifth for Kenpom’s adjusted offensive efficiency, but 125th for defense, demonstrating just how unbalanced the team is. In three different SEC games, they scored at least 90 points in regulation but also allowed 105 points in a loss to Alabama and 91in a loss to Georgia. Expect LSU’s game to be a shootout.

LSU will be the first time the Bonnies face a power conference school, having only played Akron and Hofstra outside of their Atlantic 10 slate. The Atlantic 10 is consistently one of the best mid-major conferences in the country, so it’s not as if St. Bonaventure got here playing community colleges. A key player for the New York-based school is big man Osun Osunniyi, who is ranked ninth for blocks per game in the country while leading his team with almost ten rebounds per game.

In March Madness, it always feels like one missed free throw in a late-game scenario is what decides the game, so the good news for Colorado is they’re the second-best free-throw shooting team in the country and are just one of five teams in the country to make at least 80 percent of their attempts from the line. Of course, that free-throw shooting faltered in the Pac-12 title game against Oregon State, where a 12-for-20 effort was the first time they shot under 70 percent on their free throws all season. The key man for the Buffs is senior point guard McKinley Wright IV, who leads the team in both points and assists per game.

On January 9, Patrick Ewing’s squad was 3-8 after losing to Syracuse in a Big East reunion and then wound up not playing again until January 30 after a coronavirus pause. From there, the Hoyas finished the season 9-12 and entered the conference tournament as a seemingly unsuspecting #8 seed. Then they knocked off #1 seed Villanova in the quarterfinals and ran #2 seed Creighton out of the gym for their first tournament appearance since 2014-15. Freshman point guard Dante Harris was a key part of the surprise run to the tournament, averaging 14.3 points across the quarterfinals, semifinals and final. Making it to the tournament is already a success for this year’s Hoyas but it’s hard to believe someone like Patrick Ewing will be satisfied with just making it.

With former Baltimore police officer Bunny Colvin as the head coach, the Seminoles’ recent NCAA tournament success have made it seem like FSU is now a basketball school, thanks to an Elite Eight in 2018 and a Sweet Sixteen in 2019. The Seminoles make 39 percent of their threes, which is ninth in the country. They also are ranked 11th for offensive rebound percentage, meaning they enjoy no shortage of second chances after their misses. FSU’s recent success definitely makes them an interesting Final Four pick.

Out of everyone in the tournament field, UNCG has the second-worst three-point shooting percentage, so you probably shouldn’t count on them upsetting FSU by scorching the net from deep. While they don’t make a ton of threes, they do make sure they take care of the ball, ranking 18th in the country for offensive turnover percentage.

From 2006-07 to 2014-15, BYU only missed the tournament once and was a model of consistency. Then, the school missed the tournament four straight seasons and subsequently brought in a new head coach. Last year BracketMatrix.com had them as a #5 seed and this year’s season went similarly well with a #6 seed under the leadership of Mark Pope. BYU is in the top 40 for both 2P% and 3P%, so they’ll be able to score both inside and outside as they look to make the Sweet Sixteen for the first time since 2011.

I already went in-depth on MSU in this article, so give that a read if you want more details on MSU’s impressive string of quality wins to end the season and earn a tournament spot. Meanwhile, UCLA ended its season on a four-game losing streak, fumbling away three chances at a quality win against fellow tournament teams Colorado, Oregon and USC and losing their first game of the conference tournament against the eventual champion, Oregon State. MSU vs. UCLA feels like a classic test of being hot vs. being cold going into the tournament. It’s also a matchup of past tournament winners, which is always interesting.

Texas is back, folks! Sorry, that was too easy.This is the best seed the Longhorns have had in the tournament since 2008, where they were a #2 seed and made it to the Elite Eight before losing to Derrick Rose’s Memphis Tigers. While Shaka Smart will always be a March Madness legend for his 2011 VCU team going to the Final Four, he’s been unable to reach the second weekend since then with VCU or Texas. Smart has lost his last four tournament games between his two schools but the momentum that Texas has from winning the Big 12 tournament should be helpful to end the drought.

No one in the country forces turnovers at a higher rate than the Wildcats, creating one on 26.7 percent of their defensive possessions. This has been a trend for ACU, ranking second in the category last season and ninth in 2018-19. On top of the turnovers, this team also has a Reggie Miller, with no relation to the former Indiana Pacer. Miller leads ACU in minutes per game, so be prepared to hear that name a lot during their meeting with Texas.

After several years of dwelling in the American Athletic Conference playing schools like Tulane and Tulsa, UConn was reunited with the Big East. Although the conference now includes a school in Nebraska but not Syracuse, so it’s not quite the same. The 11-6 conference record for the Huskies was solid but lacked a truly impressive win, going 0-3 against Creighton and Villanova before losing to Creighton again in the conference tournament. For a more detailed preview of UConn, be sure to read Chris Knoche’s article on the team and their meeting with Maryland.

I can’t imagine there’s a large number of people reading this who aren’t Maryland fans but if that’s you, here’s my summary of the Terps. Maryland lost Jalen Smith to the draft and Anthony Cowan to graduation and didn’t really do anything meaningful to replace them, including a freshman class that hasn’t seen any player average even ten minutes a game. Maryland’s win over Illinois without Eric Ayala is the crown jewel of their resume, an impressive road performance without their leading scorer. Maryland getting an at-large bid directly in the field while sitting two games below .500 in conference play is a reflection of how respected the Big Ten was this season.

Not satisfied with its grasp on college football, Alabama decided it’d be good at men’s basketball this year too. Nate Oats, after leading Buffalo to the NCAA tournament three times in four years, has only needed two years with the Crimson Tide to turn them into the SEC champs for both the regular season and the conference tournament. Alabama relied on a pretty balanced offense for their success, with four players scoring at least ten points per game but none of them clearing 15 points.

Would it really be the NCAA tournament without Rick Pitino? After his scandalous departure from Louisville and spending some time coaching in Greece, the Hall of Fame coach has returned to the tournament for the first time since 2017. In one of the best demonstrations of how bizarre this season of coronavirus has been, Iona played just nine games in conference play while conference foe Monmouth played 18. Whenever Iona has been able to play, Isaiah Ross has been their leading scorer while making 39.1 percent of his threes.

Coach with the most pressure: Shaka Smart, Texas. Texas hasn’t seen the second weekend since 2008 and if this year’s #3 seed can’t make it, there might be some pretty major frustration in Austin.

Coach with the least pressure: Patrick Ewing, Georgetown. Coaching your alma mater to a surprising Big East tournament title at Madison Square Garden is a successful season even if the Hoyas lose to Colorado by 40 points.

Coach who can raise his stock the most: Nate Oats, Alabama. Buffalo’s 2018 first-round domination of Arizona with Deandre Ayton was an impressive start to his tournament resume, but if he can take Alabama to a Final Four or even go as far as winning the national title, he’ll likely be looking at some pretty impressive coaching offers.

Highest projected draft pick: Scottie Barnes, Florida State. Barnes is one of three Seminoles to average at least ten points and the power forward projected to taken #6 by Fansided and #10 by Bleacher Report based on the strength of his defense.

Player most likely to get hot shooting threes: Alex Barcello, BYU. Out of everyone in the country with at least 100 attempted threes, Barcello has the best percentage, making 48.6 percent of them. He could make the difference for the Cougars against MSU/UCLA or Texas.

Predicting chalk is always boring to me, even if it has a greater chance of being correct. I think Leonard Hamilton’s prior tournament success will be enough to get his Seminoles into the Final Four. I also think BYU’s shooting is pretty impressive and could get just hot enough to create some real noise in the region. You could definitely convince me on Georgetown being your standard 12-5 upset but I’d guess Patrick Ewing’s magic will run out once he isn’t in Madison Square Garden.