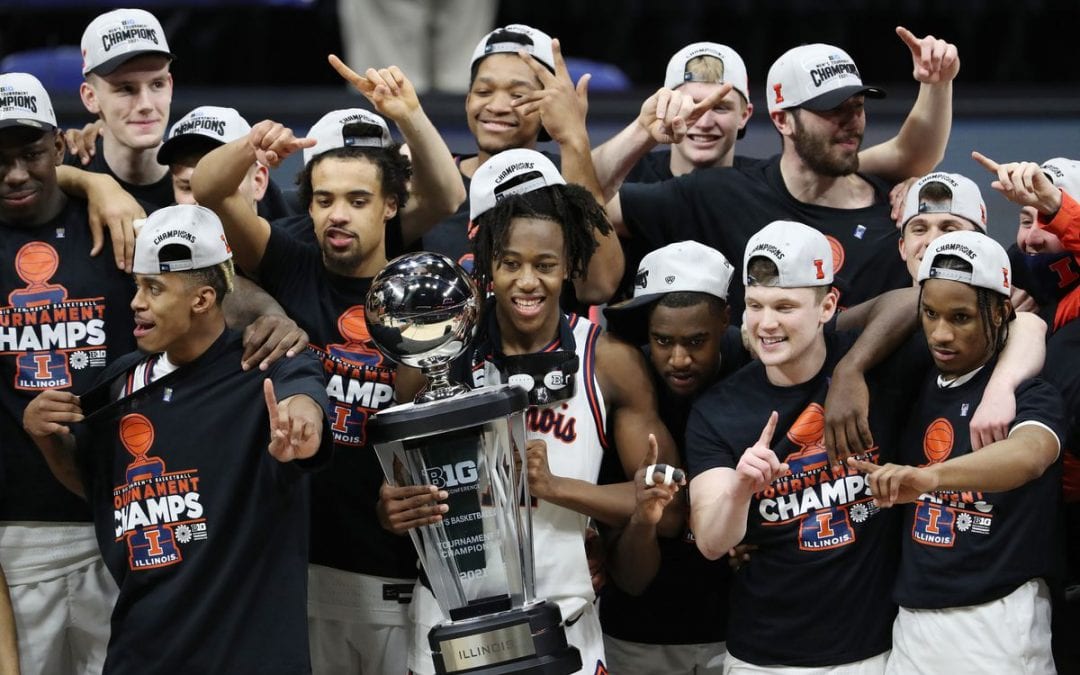 We’re in the month of March, which signals two things; spring is on the way and college basketball is March Madness underway.

COVID-19 forced the NCAA to cancel all my postseason just hours before the major conferences began their tournaments. A year removed from the day that will live in sports infamy, fans everywhere can rejoice by filling out a bracket. The NCAA has decided to have a “bubble-style” tournament, with all games played in the state of Indiana to help combat the looming COVID-19 virus. In the end, the Final Four teams will meet at Lucas Oil Stadium in Indianapolis.

The Midwest Region of the bracket has a slight potential of being entertaining, but the top-seeded Fighting Illini of Illinois is heavily favorited. On paper, not too many games have upset potential except for the infamous 5th v. 12th seed matchup. This region does include a few of the nation’s best players including the potential next #1 pick in the upcoming NBA Draft.

The Fighting Illini are coming into the dance as one of the hottest teams. Since January 19th, they are 14-1, including a championship run in the Big Ten Tournament. They’re led by the superstar point guard, Ayo Dosunmu, who is a player of the year candidate, averaging 20.6 points, six rebounds, and five assists per contest. Dosunmu sidekick, Kofi Cockburn is a force in the middle, averaging 17 points and nine rebounds a contest. This is the most talented team in the region and it is their region to lose.

The Cougars represent the AAC conference with Kelvin Sampson as their head coach. Sampson is entering his 16th NCAA Tournament but has a mediocre 15-16 record. He relies on his top guard, Quentin Grimes, who leads the with 17 points per game and a 40% three-point percentage. They 16-2 since January 17th, only losses coming on the road against East Carolina and Witchita State.

The Mountaineers limped into the dance as a Big 12 at-large bid. They lost three of their four games, two of which against Oklahoma State. All three losses were by a combined 11 points. Head coach Bob Huggins makes his 24th appearance in the NCAA tournament, with four players averaging double digits. Big Man Derek Culver led the Big 12 in rebounding (9.2) while also scoring 14 points a game. This is a high seed for a team with nine losses and entering the dance on a slump but it’s a guaranteed Huggins will have his team compete a high level.

If it wasn’t for an appeal, Oklahoma State would not be participating in this year’s tournament. Mke Boyton makes his first trip to the dance after four seasons with the Cowboys. Boyton is blessed to have the best player in the region, possibly in the entire tournament, in Cade Cunningham. Cunningham will likely be the #1 pick in the next NBA Draft for his scoring ability. He has shown he can take over a game and that was evident in his most recent 40-point performance against Oklahoma late February.

The committee didn’t help the Volunteers, who have been inconsistent all season, landing them in the dangerous 5th seed spot. Freshmen Jaden Springer and Keon Johnson lead the backcourt averaging a combined 23 points a contest. Only one more player averages over double-digits, Victor Bailey. Yves Pons is the veteran leader on this unit and if the Vols expect to go on a deep run, he will have to step up for Rick Barnes and the Tenessee unit.

The Aztecs record shows they should be seeded higher and you can argue their performance supports it also. The committee didn’t think their conference was strong enough, which is why they fell to 6th but the Aztecs haven’t loss a game since January 16th (59-64 @ Utah State). And if you want to go back even further, they are 53-6 since 2019. They have upperclassmen experience led by Matt Mitchell and Jordan Schakel who average a combined 29 points per game, Schakel shooting lights out from behind the arc at 46.7%.

The Tigers should send the committee a very thoughtful gift for placing them in the dance despite their unfulfilling record. Clemson has good wins against non-conference opponents, starting 6-1 to start their season, even winning their first three ACC games. After January 5th, the Tigers went on a decline that included a three-losing streak, outscored by their opponents 248-171. After the three-game skid, the Tigers finished season 7-3 in their last 10 games.

The Ramblers are 17-2 in their last 19 games as they head into the dance. If you remember, they were the Cinderella team in the 2018 NCAA Tournament, making it to the Final Four as an 11th seed. Only big man, Cameron Krutwig remains from that magical run. Krutwig leads the team with points, rebounds, blocks, and assist. The roster isn’t loaded offensively, but they lead the nation in defense, only allowing 55 points a game.

On Valentine’s Day, Georgia Tech were looked to be one of the first four out with a 10-8 record. A week later they turned it around and sparked an eight-game win streak, including winning the ACC Tournament title. This team has three players averaging 15+, Jose Alvarado (15.3), Moses Wright (17.4), and Michael Devoe (15.1). With that kind of production on the offensive end, mixed with 16 forced turnovers a game, the Yellow Jackets have the tools to make a deep run in the region.

Led by Ron Harper Jr., the Scarlet Knights make their first appearance in the NCAA Tournament since 1991. Son of former NBA player, Ron Harper, Harper Jr. has the make of tourney style player that can carry a team. In Rutgers 6-0 start, Harper Jr. scored 20+ four times, including a three-game stretch of 26, 27, 28. He wouldn’t score 20 again until February 20th v. Indiana, 14-games later. Rutgers struggled during that scoring slump but if Harper can find his rhythm early, Rutgers can ride the big guard deep in the region.

Jim Boehiem enters into his 34th NCAA Tournament with a Syracuse unit led by his son Buddy Boehiem. Boehiem leads the Orangemen in scoring, averaging 17 points per contest. Syracuse lived on the bubble Selection Sunday and like most teams, they relied on there strength of schedule.  The Orange has played well down the stretch, and they depend on hitting threes, but  a poor shooting day could end their run at any point.

When it comes to March Madness, timing is everything. The Beavers were 11-11 and 7-9 in the PAC-12 on February 20th and three weeks later they were the conference champs. Head coach Wayne Tinkle is in his seventh season at Corvalis but he is still is winless in four trips to the dance. Ethan Thompson leads the team in scoring and minutes played (15.5 ppg 33.4mpg).

The Flames haven’t loss a game since January 15th and take home their third conference title on their way into the dance. Conference player of the year Darius McGhee leads the team in 3pt shooting, a unit a that averages 10 three pointers a game. They’re top-20 scoring defense (59.6 ppg) will be tested as they take on the nation’s best scoring threat.

Morehead State, Cleveland State, and Drexel fill out the bottom of the region. Drexel is the 16th seed and they punched their ticket with a Colonial conference title but I doubt we will see a UMBC moment from the Dragons. Morehead State has the best record of the three and has a dominant post presence, ranking high in block shots and rebounds.