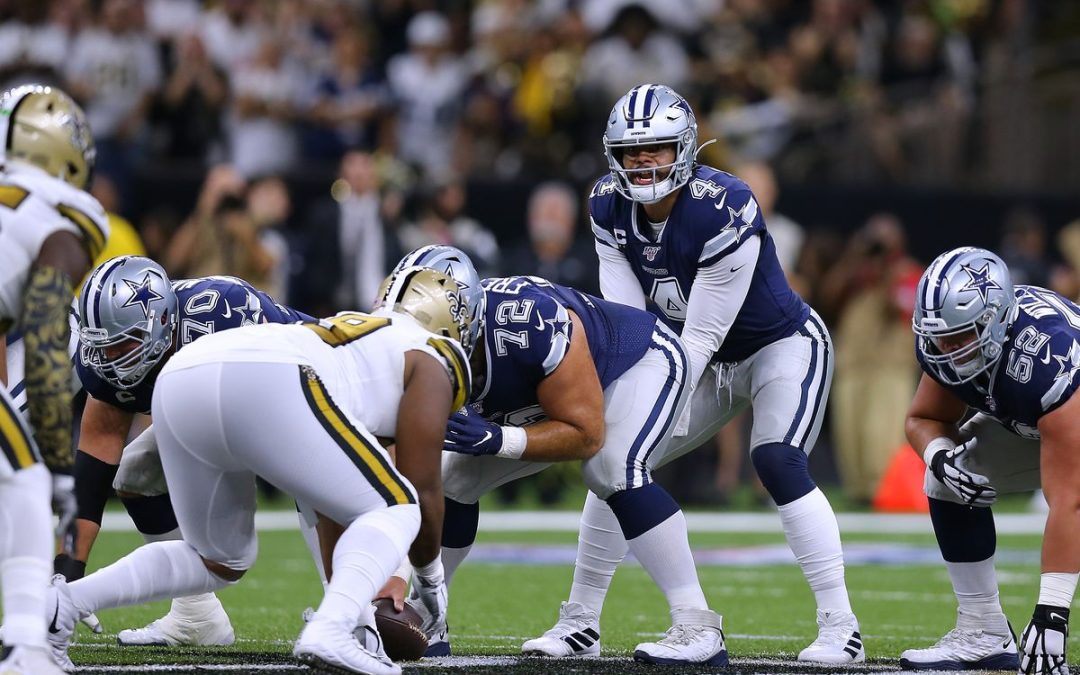 Week 13 is still a bit too early for a must-win game, especially if you’re the Cowboys, who are sitting with a nice lead in the NFC East. But, let’s not kid ourselves, Thursday night was just what Big D needed.

With head coach Mike McCarthy and five assistant coaches missing the trip to New Orleans because of the COVID protocol, the Cowboys — losers of three of their previous four games — came up big defensively, picking off Saints QB Taysom Hill four times en route to a 27-17 victory. It wasn’t just a win, it revived the talk of Dallas being a contender.

“The Super Bowl, playoffs, you got five games left,” said rookie linebacker Micah Parsons (via Sports Illustrated). “There’s stuff to be done … I don’t think it’s time for me to sit on my couch, smiling, eating Cheetos. I’m trying to do something way bigger than anybody thought we could do this year.”

And bigger is now possible again as Parsons and the rest of his compatriots have two games against Washington and one against the Giants over the next three weeks. By the time their Jan. 2 matchup against the Cardinals comes up, the Cowboys can wrap up a division crown and start planning their playoff strategy, and if they get some lucky breaks, can possibly even contend for the NFC’s top seed.

That’s a good spot to be in.

Here’s a team who isn’t in a good spot at the moment: The Los Angeles Rams.

Remember when they came out and wowed the world with their Sunday night win over Chicago in Week 1? Remember when they took down Tom Brady and the defending champion Buccaneers a short time later? Seems like a lifetime ago, doesn’t it?

So, what has happened? I don’t particularly enjoy pointing fingers, but a lot of the blame has to fall on the shoulder of Matthew Stafford, the quarterback that head coach Sean McVay was overjoyed to land and gushed about over the first few successful weeks. But reality has seemingly set in.

Stafford has thrown pick-sixes in three consecutive games (something Jared Goff never did) and his early mistakes have been a key catalyst in L.A.’s three consecutive losses, all against playoff-contending teams. In fact, the Rams went 0-3 in November while losing WR Robert Woods for the season due to an injury. Ouch.

McVay suddenly has a lot of pressure on him. He got rid of Goff because he felt that the Rams could take the next step with Stafford under center. What happens from here on out will serve as a de facto referendum on his coaching acumen. Will he be able to bring his squad out from the doldrums? Cold stretches in the regular season are nothing new. Look no further than last year’s Buccaneers, who looked lost at about this point in the season before they were able to pull things together and go on an eventual Super Bowl run.

Let’s see if McVay is up to the challenge. It helps that they get to face the Jaguars at home on Sunday. That’s a good opponent to get healthy against.

Not worth the trouble: I can respect a player’s talent and still not want him anywhere on my roster. Antonio Brown is that guy. In addition to all the baggage he carries, he’s now been suspended for three games for submitting a fake vaccination card. As Pro Football Talk pointed out, Bucs head coach Bruce Arians once said that if Brown “screws up one time, he’s gone.” Welp, this is a pretty good-sized screwup, so what’s it gonna be, coach?

Back in the Bay: Whenever you start to panic about your team, just remember that an NFL season is just 17 games, but that’s actually a long time. Take the 49ers, for example. They were once sitting at 3-5 and looked like they were taking on water fast. Three weeks later, they’ve smacked around the Rams, Jaguars and Vikings, scoring 30-plus points in each game. They’re at 6-5 and right back in the playoff hunt. Head coach Kyle Shanahan has at least temporarily silenced his doubters and will be a tough out down the stretch.

Closing the door: The Seahawks under Pete Carroll have been a model of NFL success. But those days are over. Russell Wilson is in the middle of a lost season (a thumb injury playing no small part) and could be dealt away this offseason. The rest of the roster looks like a mish-mash of unmatching parts. Carroll isn’t getting any younger. Is it time for a franchise reset?

Now that’s toughness: Saints quarterback Taysom Hill got the start on Thursday and injured the middle finger on his throwing hand when his hand collided with a defender. Did Hill leave the game? Did he cry on the sideline? No way, he put a splint on his finger and got back out there. “It took a little getting used to,” Hill said. “Any time you put something on a finger, traction on the ball and stuff, but it was OK.” You gotta respect that kind of mettle. Even with four interceptions.

Chargers at Bengals — Los Angeles’ other team has also slipped like the Rams. And with the weather getting colder, a Southern California team might struggle in Cincinnati. But Justin Herbert played his college ball at Oregon, where I’ve read it can get chilly during the fall and winter. This should be an interesting matchup.

Giants at Dolphins — It’s true that both of these teams are under .500. But Miami is suddenly interesting as the Dolphins have won four straight games and Tua Tagovailoa has been playing well as of late. The Fins might even their record over the next couple games.

Washington at Raiders — If the Football Team (eyeroll) loses this game, that should do it for the NFC East race. And Las Vegas needs this win if they have any prayer of keeping up with Kansas City in their division.

Ravens at Steelers — Don’t be alarmed if you hear loud popping sounds on Sunday afternoon. That’s just the cracking of shoulder pads in Pittsburgh, because when these two teams get together, things get physical. I can’t wait.

Broncos at Chiefs — Kansas City is on a roll and I’m not sure Denver is the team that can derail them. But hey, stranger things have happened.

Patriots at Bills — Normally, I’d say it’s Monday night and there’s nothing else to watch. But this game should hold your attention. Grab the popcorn.