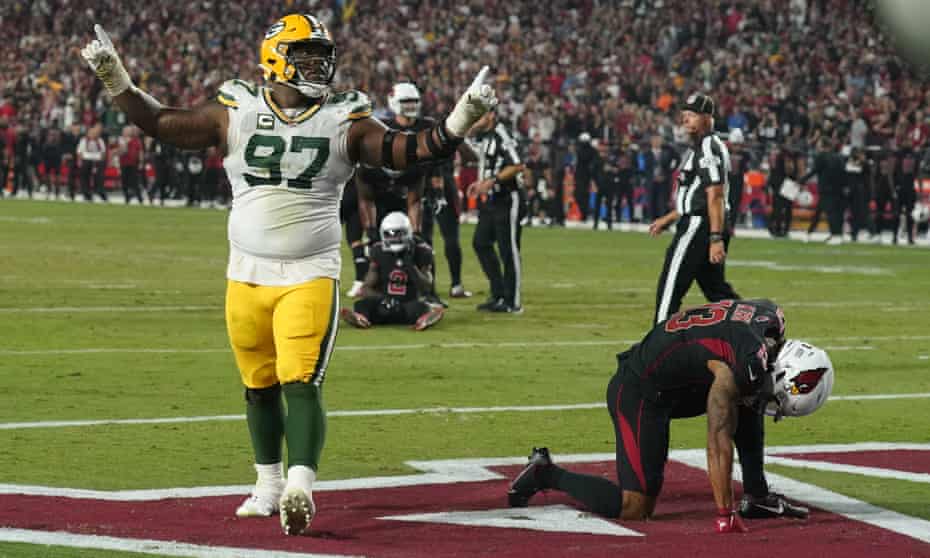 The desert hasn’t been kind to Aaron Rodgers. That’s not surprising as the climate can be rough for a guy from Northern California. Just because it’s a dry heat doesn’t mean you can’t catch a nasty burn.

And Arizona has definitely roasted the Packers quarterback, especially in the postseason. Some of you might be old enough to remember that wild card game in January 2010, when Rodgers was sacked in overtime, fumbled and the ball was returned for a touchdown that gave the Cardinals the victory.

Fast forward a few years to January 2016, when Rodgers seemingly pulled off the impossible in the divisional round, completing a Hail Mary pass for a touchdown as time expired to force the game into overtime. No. 12 was rewarded for his heroics by never getting a chance to get the football. Larry Fitzgerald scored a touchdown on the second play of overtime and the Packers were once again sent … well, packing.

And on Thursday night, it seemed like Rodgers was going to be left high and dry (sorry, I’ll stop with the desert puns) yet again. Green Bay, holding a three-point lead with a chance to put the game more or less out of reach with a little more than three minutes remaining, were stopped on downs despite having a first-and-goal from the Arizona 1-yard line.

The Cardinals had 99 yards to go, but the rumbling in the pit of Aaron’s stomach had already started. The rumbling grew to a growl when Kyler Murray connected with A.J. Green for 23 yards. The growl turned into a snarl when Christian Kirk brought down a 29-yard reception. The snarl became a full on roar when a Murray scramble gave the Cardinals a first-and-goal with 1:16 left in the game.

And then … sweet relief for Mr. Rodgers. On second-and-goal from the 5-yard line, cornerback Rasul Douglas (more on him later), who had been recently signed off the Cardinals practice squad of all places, picked off a Murray pass in the end zone that clinched the win for Green Bay.

Does that exorcise Rodgers’ Arizona playoff demons? No, I won’t go that far. But hey, getting a tough win against an unbeaten team when your receiving corps was decimated by injuries or the COVID protocol, is something that can really bring a team together.

Stick around: Rasul Douglas was a third-round pick back in 2017. He spent his first three years with the Eagles and then bounced around the league a bit, spending time on a few offseason rosters or practice squads. I wouldn’t have blamed him for deciding to do something else. That maybe professional football wasn’t for him. But he didn’t and opportunity came knocking when the Packers signed him off Arizona’s practice squad on Oct. 6. And just a few weeks later, he made the game-winning play against his former team. And Aaron Rodgers was impressed.

“He was on the street. We brought him in. He’s starting for us. He’s a great dude. He’s really meshed well with our team. To come up with a play like that with 15 seconds left is incredible,” Rodgers said.

Good things can happen to people who refuse to give up.

That’s a hard no: Mike Tomlin is an NFL head coach. In fact, he’s the coach of the Pittsburgh Steelers. If you want to say that job is the best in sports, I’ll be glad to have that conversation with you because there are many great points to support that claim. So no, there’s no way a man who has never had a losing season with that particular organization is going to leave for a college football gig, even if it is at a sleeping giant like USC. Now, I don’t understand why Tomlin was so offended by the question, because it isn’t like reporters came up with that out of nowhere. Former NFL quarterback and USC alum Carson Palmer mentioned Tomlin’s name as a possible target for the open Trojans job during an interview with Dan Patrick. The reporters were just doing their jobs. But it was fun to see how forcefully Tomlin slammed the door on that proposition. The man isn’t going anywhere. At least not yet.

I don’t believe you: Dolphins head coach Brian Flores said that barring injury, Tua Tagovailoa will be the team’s starting quarterback for the rest of the season. Unless the team can realistically swing a trade for Deshaun Watson, right coach?

Aging gracefully: Remember when Mark Ingram won the Heisman Trophy? Believe it or not, that was back in 2009. And he’s still in the NFL despite playing running back, a position with the average shelf life of ground beef from the 99 cent store. He probably won’t end up in Canton but to have all those years in the league and scoring 74 total touchdowns in the process is nothing to sneeze at. He was traded back to the Saints — his original NFL team — this week. Here’s hoping he continues to do good things.

49ers at Bears: A lot of people have started to question Kyle Shanahan’s bona fides this week. After all, his total record in San Francisco is under .500. I’m not sure if that’s fair, because he has dealt with an inordinate amount of injuries at times, but he needs to erase the memory of last week’s bad Sunday night loss. A trip to Chicago just might help.

Steelers at Browns: The Tomlin Is Going Nowhere tour hits Cleveland on Sunday and Browns quarterback Baker Mayfield is going to start, despite his injured shoulder. Pittsburgh’s offense is trash, but they may not need to score all that much if their opponent’s offense can’t move the ball with a hobbled quarterback.

Titans at Colts: Indianapolis was 0-3 once upon a time. But they’ve won three of four games since and both sides of the ball are playing well. If the Colts want to have a shot at a division title, they’ll need this win over Tennessee. But even if they lose, they’ll be in the playoff mix as the season progresses.

Patriots at Chargers: New England just put up 50 points (I know, against the Jets) and have a chance to get back to .500. I wonder how many New England fans live in the L.A. area? I guess we’ll find out on Sunday.

Buccaneers at Saints: This should be a good matchup on paper as the Bucs are 6-1 and the Saints are 4-2. But in reality, Tampa should run away with this one.

Cowboys at Vikings: If Dak doesn’t go in this game, the Vikings could win their fourth game in the last five weeks.

Giants at Chiefs: What if … not saying it’s so, but what if … Kansas City loses this game and falls to 3-5?!