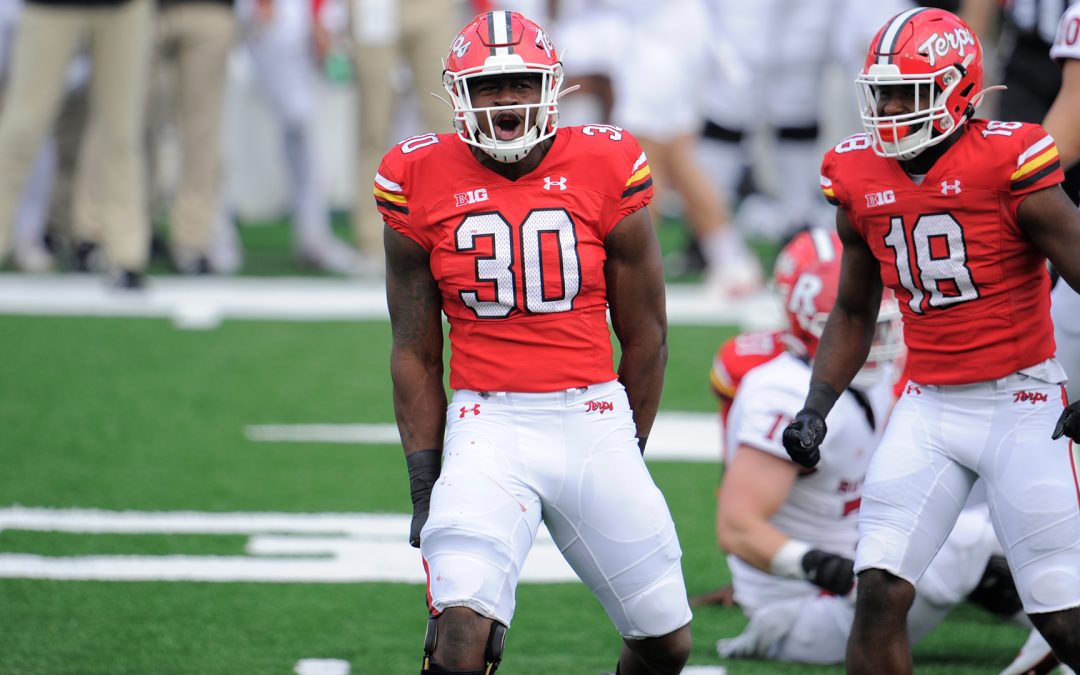 Despite Brian Williams being Maryland’s third defensive coordinator in five years, the team has run an odd-front scheme in every season since head coach Michael Locksley arrived in College Park. The outside linebacker positions are some of the most difficult to play in this system, as they’re expected to combine elite pass rushing with the ability to cover tight ends and running backs. This season, the Terrapins will be relying on a combination of upperclassmen and freshmen in these roles.

Note: Players with an asterisk (*) next to their class will have an extra year of eligibility available to them following their senior season due to COVID-19.

Can Nchami stay healthy?
When he’s able to stay the field, Durell Nchami is an excellent pass rusher from the JACK position. However, he missed the entire 2019 season and half of last year due to injuries. The team is hoping that he can put together a full year in what will likely be his last in College Park.

How will Robinson be replaced?
The Terrapins were dealt a heavy blow when rising sophomore Demeioun Robinson entered the transfer portal after last season and headed north to Penn State. He was expected to play a major role this year, but a reportedly hefty Name, Image, and Likeness (NIL) deal lured him away. The team will have a few players vying for the starting job across from Nchami, including 4-star freshman Jaishawn Barham.

Who steps up to provide depth?
In order to keep his pass rushers fresh, Williams will likely be looking to use a rotation at both outside linebacker positions this season. Therefore, players like Terrance Butler, Jr., Quashon Fuller, and Zion Shockley have opportunities for significant snaps in reserve roles.

Thomas, Jr. is one of three new coaches on the defensive side of the ball for Maryland this season, taking over for Ron Zook. He spent last season as a Special Teams quality control coach for Locksley after serving two years on the coaching staff at Angelo State. He’s also spent time as a coach at Clarion and Western New Mexico.

Barham comes to College Park as a 4-star recruit from St. Frances Academy in Baltimore, MD. While he initially committed to South Carolina, he flipped to Maryland on National Signing Day in December and became the team’s highest-ranked recruit in their 2022 class. 247Sports ranked him as the 10th-best linebacker in the country, and the 3rd-best player from the state of Maryland. He enrolled early, and has been with the team since January.

I’ve projected Barham to serve as the team’s starting strong-side outside linebacker this season. He has the ability to play both inside and outside, and may do some of both depending on the situation. In Williams’ scheme the SAM is typically asked to do more in coverage than the JACK, which is something that Barham has the ability to do well.

Nchami only played in Maryland’s first six games before suffering the second season-ending injury of his collegiate career. Nearly half of his tackles came behind the line of scrimmage, including two sacks in the team’s win over Illinois. When healthy, he has the ability to be a difference-making pass rusher. I’ve projected him to serve as the team’s starting weak-side outside linebacker, though he’ll likely be part of a significant rotation at the position.

After spending the last four years at West Virginia, Cowan transferred to Maryland for what will likely be his final collegiate season. His relationship with Locksley dates back to 2017 at Alabama, when he spent his freshman year before transferring to play for the Mountaineers. His best game of the 2021 season came against the Terrapins, as he recorded 5 tackles.

I’ve projected him to serve as the team’s second-string strong-side outside linebacker this season. Like Barham, he has the ability to play both inside and outside. Expect the coaching staff to utilize his versatility as part of the rotation.

Shockley saw the field in three games for the Terrapins last season after arriving in College Park as a 3-star recruit from St. Frances Academy in Baltimore, MD, where he was a teammate of Barham. His lone tackle came in the team’s bowl victory over Virginia Tech. I’ve projected him to serve as the team’s second-string weak-side outside linebacker this season. He’ll have an opportunity to make a major impact, particularly with the departure of Robinson.

Owens comes to College Park as a 3-star recruit from Calvert Hall College High School in Towson, MD. 247Sports ranked him as the 108th-best defensive lineman in the country, and the 18th-best player from the state of Maryland. While he may have the ability to bulk up and play the 5-technique position on the Terrapins’ defensive line, he’ll likely slot in as an outside linebacker for now. I’ve projected him to serve as the team’s third-string strong-side outside linebacker this season.

Fuller spent the last three seasons at Florida State before transferring to Maryland, seeing the field in all but two games for the Seminoles in 2021. His best game came in their first contest against Notre Dame, as he recorded 3 tackles and his only sack of the year. He may see some time at the 5-technique position on passing downs, but should spend the majority of his time at outside linebacker in 2022. I’ve projected him to serve as the team’s third-string weak-side outside linebacker this season.

Booker originally committed to Maryland as a member of their 2021 recruiting class, but wound up grayshirting and enrolling in December. He’s a 3-star recruit from Winton Woods High School in Cincinnati, OH. 247Sports ranked him as the 78th-best linebacker in the country, and the 29th-best player from the state of Ohio. I’ve projected him to serve as the team’s fourth-string strong-side outside linebacker this season.

Teague comes to College Park after spending the last two seasons at Morgan State, where he was named as an All-MEAC player in both 2020 and 2021. A local product, he spent his high school career at North Hagerstown High School in Hagerstown, MD. I’ve projected him to serve as the team’s fourth-string weak-side outside linebacker this season, but he should have an opportunity to work his way into the rotation with a good summer camp.

Like Shockley, Butler, Jr. saw the field in three games for the Terrapins in 2021, with his lone tackle coming in their bowl victory over Virginia Tech. A high school teammate of Barham and Shockley at St. Frances Academy in Baltimore, MD, he came to College Park as a 3-star recruit before last year. I’ve projected him to serve as the team’s fifth-string weak-side outside linebacker this season.