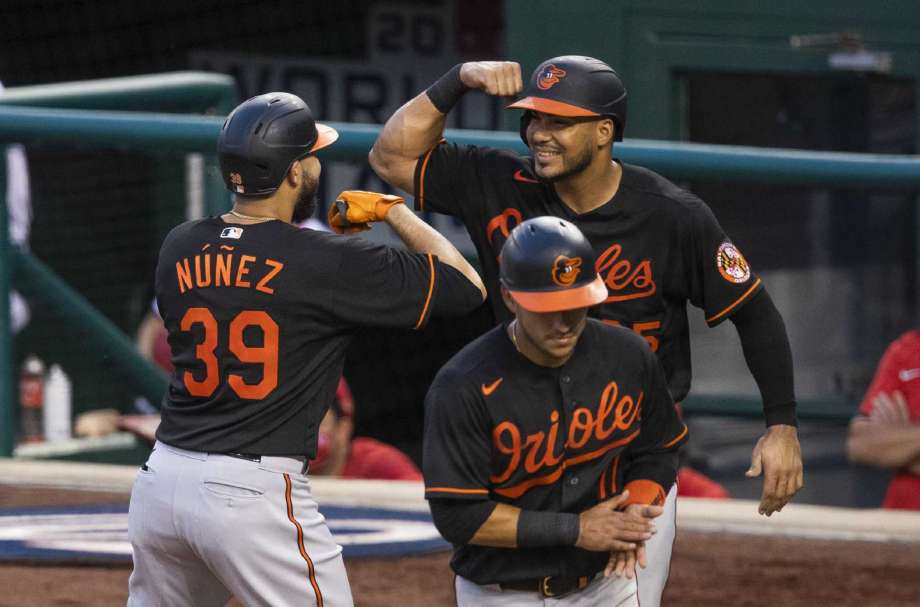 Every week that we have baseball this season, and enjoy every single one because it could disappear at any given moment, I will be taking note of the three hottest Orioles and the three coldest.

The major league leader in RBI is playing right field (and quite well by the way according to Baseball Savant’s metrics) everyday for your contending 2020 Baltimore Orioles. No that isn’t fan fiction. Santander doesn’t have the highest OPS on the team (hes actually fifth behind Pedro Severino, Renato Nunez, Jose Iglesias, and Chance Sisco) but he does lead the team in WAR and homeruns against three time Cy Young winner Max Scherzer. He hit two of them on Sunday against the defending World Series champion Washington Nationals’ ace, the second one a majestic blast on Eutaw Street to tie the game in the seventh inning. Unfortunately the defense would let the team down an inning later but Santander has become the Orioles most feared and reliable hitter. He hits the ball hard (90 mph exit velocity, three mph higher than the MLB average) and has increased his launch angle by six degrees so far this year. He is above average in every metric on Baseball Savant other than sprint speed (46th percentile, about average). The only thing missing is walks which is what keeps his on base percentage lower than you would like from your second hitter in the lineup. Hopefully as his power gets more respect over time he will be more patient on balls out of the strike zone like Renato Nunez has been able to do so far this season.

Who wou;d have guessed that the first player to appear on this list twice would be Pedro Severino? It is especially impressive considering he is a catcher that gets more days off than the other everyday players in the lineup. He leads the team in OPS (technically Chance Sisco does but only over 28 at bats) and had 10 RBI this week which puts him tied for seventh in the American League with 18 overall. Hes hitting for average and power despite being in the bottom sixth percentile in exit velocity and 24th percentile in hard hit percentage. He must be hanging out with Hanser Alberto. But he is getting the barrel on the ball more than the average hitter. Surprisingly he has been much worse than Sisco at framing pitches (12th percentile) but there is no doubt he is still the more reliable defender behind the plate. We’ll see how he fares the rest of the season now that he won’t have his former team to punish for letting him go.

Orioles fans have been hearing Tanner Scott’s name as a possible future closer for a long time now. He has an electric two pitch arsenal that elicits a high percentage of swings and misses between his 96 mph fastball and wipe out slider. The problem has always been that it appears he has no idea where the ball is going especially in pressure filled situations. So far in 2020 it looks like he might be finally cashing in on his potential. He has a 1.13 ERA over 8 innings, most of which have been high leverage scenarios for a surprisingly winning team. He is still walking more batters than the average pitcher but hes not falling apart and his stuff has been good enough to make up for it. His slider has always been a weapon but it looks like hes more comfortable throwing it in any count right now. He has an elite 92% ground ball percentage (around 50% in 2018-2019) which could be a result of his fastball having an increased spin rate. The walks might keep him out of the closers role but hes proving that he could be a reliable lefty arm that can get out the opposition’s best hitters, reminiscent of an Andrew Miller or a poor man’s Zack Britton.

I was surprised to see how poor Valaika’s numbers were for the week and even the season overall. Its probably because he has had some clutch hits including that walk off base hit up the middle a couple weeks ago. He plays all over the field and hasn’t looked out of his depth at any position, even if his range at shortstop might not be up to snuff. He has good at bats at the plate to my eye but just doesn’t have the results to go with it. Andrew Velasquez is starting to heat up and has added some value being able to play center field with Austin Hays on the injured list due to a fractured rib. If the rest of the team wasn’t hitting so well this would be a predictable battle to watch between the bottom of the roster fighting not to be replaced by a similar player working out at the alternate site. Its only a matter of time before the Orioles start re-arranging the deck chairs on the Titanic on their bench, hopefully for Valaika’s sake the hits start dropping in with more frequency soon.

Based purely on numbers the starting pitcher that should be on this list is John Means but I am sparing him due to the circumstances. The Orioles’ ace hasn’t had a chance to establish a routine of any sort. He was shut down with a sore arm to start the season and then missed a week or so due to the unfortunate passing of his father. He couldn’t get out of the first inning on Sunday but he also had some bad luck and was on a pitch count. I know, this entry is supposed to be about Wade LeBlanc… Unfortunately he had another poor outing. He couldn’t get out of the fourth inning on Wednesday against the Philadelphia Phillies. His stuff is amongst the worst in the major leagues so he really needs have great command every time out and it just hasn’t been there the past couple starts. Seeing his name on the probable starters doesn’t inspire excitement or confidence and after seeing Keegan Akin finally make his major league debut I think he would give the O’s a better chance to win every fifth day.

Castro started the season off so strong. Dotting his almost 100 mph fastball and low 90’s change-up to rack up the strikeouts it looked like he was becoming a flame throwing stopper out of the bullpen that he flashed when he was initially acquired from the Colorado Rockies. The Castro that we’ve grown to “love” reared his head this past week almost blowing two games against the Phillies. You can see why the Orioles have stuck with him through his struggles. When it work, it works. Looking at the quality of his pitches you can see the potential but he can’t command them in the strike zone consistently. At this level even 99 mph fastballs can be hit hard, as evidenced by Castro being in the bottom five percent of the league in both exit velocity and hard hit percentage. Maybe if he could turn his two seam fastball down in the zone into a four seamer that rises to the top of the zone he would be more successful but if it was that easy it probably would’ve already been tried.

An auxiliary member of the MMAJA, Bob used to run the baseball blog ‘The Oriole Report’ before transitioning to podcasting about movies, TV, Video Games, and MMA. ‘The Redbox Report’ movie podcast was started in 2013 followed by ‘The Redbelt Report’ MMA podcast in 2016. In 2018 they were merged into ‘Phelan to Communicate’, a podcast that can be found on iTunes and a blog that can be found at http://PhelanToCommunicate.wordpress.com. Bob has also written for Konsume.com and BaltimoreSportsReport.com and delivers mail for a living in Baltimore County. Follow him on Twitter @TheOrioleReport.