3 Biggest Takeaways From The NBA Finals So Far 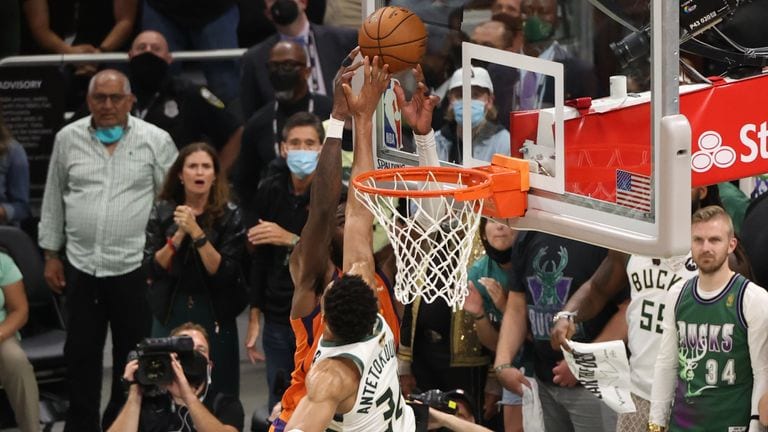 The NBA Finals series between the Phoenix Suns and the Milwaukee Bucks all nodded up at 2-2 through four games and there is so much to dissect in regard to what has happened so far and what to look forward to ahead.

There are at least ten things right off the bat that we could analyze like the effectiveness of the Suns’ pick and roll or Khris Middleton’s infatuation with showing out for the home crowd just to name a few things. But there are three major components of this series that particularly could have influenced the results of the series thus far and will likely have further implications down the line in both teams’ pursuit to leave this series the victor.

In this article we will take a look at all three of these components and break down how each of them could be a major factor in determining which team will be named the 2021 NBA Champions. With all that being said, let’s get right into it.

1. DeAndre Ayton MUST Stay Out of Foul Trouble

This statement more than anything is pivotal to the Phoenix Suns’ ability or inability to win this series. The easy explanation would be to look at his stat line (15.8 points and 12.2 rebounds per game) along with the fact that he is the team’s best rim defender, but Ayton’s presence on the floor means so much more than that.

With the injury to Dario Saric (torn ACL in Game 1) this dramatically depletes Phoenix’s frontcourt rotation. Behind Ayton, coach Monte Williams would be forced to rely on Frank Kaminsky and/or rookie bug man Jalen Smith who are both not geared for the bright lights of the NBA Finals by any means.

One of Kaminsky’s only real contributing skill sets on this Suns team is stretching the floor as he shot 36.5% from beyond the arc. Unfortunately, thus far he only has five three-point attempts (only has hit one) this postseason and none in the NBA Finals.

Definitely not a guy Coach Williams can turn to get three or four designed plays for and/or be the anchor to an unstoppable pick-and-roll offense led by either Chris Paul or Devin Booker.

Then there is Jalen Smith who just simply has not played enough to step in and contribute 10+ minutes a night when Ayton is struggling to stay on the floor. Smith averaged 5.8 minutes during the regular season on a Suns team that was relatively dominant for most of the season. Feels safe to say that Phoenix has been just fine in spite of barely seeing the former Maryland Terrapins Center on the floor and the NBA Finals does not seem like the time or place to finally let him rookie strut his stuff.

The Suns are facing a team that predicates their offense on Giannis Antetokounmpo aggressively driving and creating passing lanes or kick out opportunities for others. Therefore, Ayton’s ability to protect the rim is the only thing deterring Antetokounmpo from having his way in the lane. Any moment that Ayton is not on the floor and Antetokounmpo is, you can almost expect Milwaukee to seize the opportunity to play themselves into a lead or further their control.

To put things in perspective regarding Ayton’s foul trouble this series, Ayton had 18 personal fouls through six games in the opening round against the Los Angeles Lakers. This is his postseason high thus far in his short Playoff career. In this series against the Bucks, he already has 14 personal fouls through four games with a minimum of two more games left to be played. Just goes to show how effective the aggressiveness of Milwaukee and particularly Giannis has caused Ayton trouble.

Devin Booker and Chris Paul could play lights all series long if they wanted to and it would surely equate to seeing some exciting high IQ basketball. But the key ingredient needed to help the Phoenix Suns raise Larry O’Brien rests on DeAndre Ayton’s ability to be effective on both sides of the floor.

2. Giannis Antetokounmpo Is Easily the Best Player in this Series (Injury hasn’t hindered a bit)

Feels safe to say that going into this series, the biggest question entering Game 1 revolves around the health of Giannis Antetokounmpo. He was hindered by a hyperextended knee suffered in Game 4 of the Eastern Conference Finals that led him to miss both Games 5 and 6 to close out the series against the Atlanta Hawks.

This led most to believe that we could miss out on seeing Giannis in his first ever NBA Finals or that at bare minimum he would not be 100% in this series. Well as far as we can see, if his knee is bothering him, it surely is not hindering his ability to play at an All-Star and even MBP caliber level.

For the series he is averaging a postseason career high 32.3 points along with 14 rebounds and 5.5 assists per game on 61.3% shooting from the floor. In Games 2 and 3 he became only the 2nd player in NBA Finals history next Shaquille O’Neal (who did it back in the 2000 Finals) to record at least 40 points and 10 rebounds in consecutive NBA Finals games.

He also has displayed why nobody should doubt that he was correctly voted the Defensive Player of the Year in 2019 and 2020. Most notable through his iconic Game 4 moment that is being compared to the legendary LeBron James block on Andre Iguodala back in the 2016 Finals versus the Golden State Warriors.

This surreal sequence included Antetokounmpo playing help defense on a Devin Booker, locating a lob from Booker to Ayton and somehow being able to rotate and recover in time to somehow block the alley-oop attempt. Moments like these are not only big time plays that win ball games, but they are also sequences that will be etched in history when looking back at the history of the NBA Finals and more importantly when reflecting on the legacy of the player in question.

Giannis Antetokounmpo has the chance to come off of what could have been a season ending injury and potentially add an NBA Finals MVP and NBA championship to his already stacked trophy case. With winning this series, Antetokounmpo would have a Most Improved Player Award, multiple Defensive Player of the Year Awards and multiple MVPs and then have the highest accolade in the sport as the cherry on top.

With that kind of resume, a legitimate argument could be made that Giannis is the best player in the world right now even in the presence of guys like LeBron James, Kevin Durant and even Kawhi Leonard. It is unbelievable that he is playing at this level right now and he is quickly starting to fall into a category along with LeBron where you could argue that he should be the Finals MVP regardless of win, lose or draw. We’re truly witnessing history in the making.

3. This Series Still Has All the Storylines and Moments that make a “Great” NBA Finals

There are a handful of NBA fans, executives and even media that entered this series believing this was one of the worst NBA Finals matchups in recent history.

Regardless of how you slice it, this series has still managed to be both storyline and moments riddled to amount to a competitive and interesting series everyone wants to see to close out a tough 2021 season. Here are just some of the great storylines and moments to cling onto this far in this series:

⁃ Chris Paul could potentially win his first ring after a long 16-year journey across five teams.

⁃ Devin Booker and DeAndre Ayton changing the views of public opinion that Booker is just an empty calorie scorer and Ayton was undeserving of going No. 1 overall.

⁃ Either the Milwaukee Bucks or the Phoenix Suns will either win their first championship in 50 years or in franchise history.

⁃ 42 points in Game 4 by Devin Booker to set NBA record for most points in first Playoffs run.