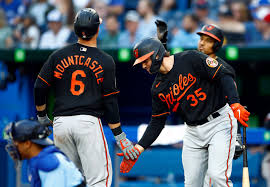 Welcome to ‘3 Up, 3 Down’, the weekly column breaking down the three hottest and three coldest Orioles players based on their performance during the previous week. It has proven to be an interesting exercise and good opportunity to highlight the highs and lows of a long baseball season. This week will highlight the performances of the series’ against the Blue Jays and Rays.

Ryan Mountcastle loves hitting against the Toronto Blue Jays. Or at least his numbers against them indicate that. For his career he has hit .348 with a 1.096 OPS, four doubles, and 12 homeruns against the Canadian teams pitching over 115 at bats. That tradition continued this past week during a four game series across the border. Two of his doubles and all three of his homeruns for the week were in Toronto. Maybe Anthony Santander temporarily transferred his skills to him since he couldn’t make the trip. Mountcastle has his OPS for the season up to .787 and his wRC+ up to 121. His 1.0 fWAR has already surpassed his total from 2021 (0.7) thanks to some decent defense being played over at first base. But its his bat that will always be his carrying tool. Once again it’s the month of June that is when he reminds Orioles fans of what he is capable of. He is batting .288 with a 1.009 OPS for the month so far with six homeruns over 73 plate appearances. Last season it was a .327 batting average, 1.016 OPS, and nine homeruns over 110 plate appearances that really jump started his season. The weather is warm and so is Mountcastle’s bat once again.

Jorge Lopez, Zach Britton – whats the difference? Actually it turns out Lopez already has five more multi-inning, one run saves than Britton did during his historic 2016 season (thanks Mackus). Obviously he has to continue having this level of success for the remainder of the season to be remembered as fondly as that (and not pitch in the most important game of the season?) and this bullpen is being managed a little differently than that Buck Showalter led playoff team but it is incredibly impressive nonetheless. For the season Lopez has a 0.79 ERA, a 2.42 expected ERA which puts him in the top six percent of the league, and a 0.84 WHIP thanks to a 63.5% groundball rate and batters only hitting .134 against him. After his good start to the season I was under the opinion that the Orioles should and would trade Lopez to a contender at the trade deadline as relievers never see their value higher than at that point and there was a chance that he could regress back closer to who he was as a starting pitcher. Well he has only gotten better since then and the longer the season goes on the less likely that appears to be. With the team being more competitive this season (24-24 over the last 48 games, 9-8 in June) I’m leaning more towards keeping him with an eye on 2023 unless the team is absolutely blown away by an offer. Lopez may not be Britton but he is pitching like a shut down closer that is undeterred by pressure.

Wells has suddenly become the most consistent and reliable starter in a rotation that has seen its early success wash away with the rain. John Means went down with Tommy John surgery very early, Spenser Watkins faltered and also ended up on the injured list before being optioned to AAA Norfolk, Jordan Lyles has struggled over the past month, Kyle Bradish is going through serious growing pains after his masterpiece in St. Louis, and Bruce Zimmermann turned into a pumpkin after seven excellent starts to open the year and has found himself back in the minor leagues. The decision to switch Wells from a reliever in the back end of the Orioles bullpen after being selected in the rule 5 draft prior to the 2021 season back to a starting pitcher this spring seemed like a risky one considering the success that he had last year but it has worked out. He was always a starter in the Twins farm system coming up before his injury sidelined him in 2018 and while he is being limited in his pitches and innings this season before being let loose in 2023, he has been very efficient which has allowed him to pitch six innings in three of his last four starts. His strikeout rate is in the bottom 10% of the league which is surprising considering he has always had great strikeout rates even as a starter in the minors but he has also had an elite walk rate this year and the lack of strikeouts haven’t effected his expected ERA (3.65 compared to 3.62 actual ERA for the season). His slider and changeup have been particularly effective. He is putting himself in position to be counted on as part of the 2023 starting rotation.

The last two years have pretty much told us who Nevin is as a hitter. He is going to walk around nine percent of the time and strike out 20% of the time. He is going to hit for a little bit of power, between .150-.200 ISO, but not as much as the eye test says he should. His batting average should be between .250-.260 given a normal BABIP. After a rough week those numbers aren’t showing up at the major league level at the moment but I feel confident they would even out given enough playing time. The problem is I don’t know that he will earn enough to prove it. There is a reason he has hovered near the bottom of our top 50 prospect list. He has a higher floor than a lot of the players ahead of him but also a lower ceiling. If he does earn a bigger role on the team it will be because of improved defense, particularly at third base, which would give him added versatility with a bat that could play around league average. His play at third base is certainly improved but it is still below average. Sam with the outfield and first base/DH is already well covered. Once Ramon Urias is ready to come off of the IL I could see Nevin returning to AAA Norfolk or at least seeing a good deal less playing time. Even if he never becomes a regular on this team he is still a good player to have around in case of injury to a player ahead of him on the depth chart.

Nothing that happens this season will probably incapsulate the excitement that Mateo brings to the team for good or bad than a series of events that happened in the bottom of the 8 inning of Sunday’s game. He was hit by a pitch in the neck near his throat and looked to be in agony but somehow stayed in the game. The crowd booed as the pitcher proceeded to throw over to first base twice in a row, like a guy who was seemingly injured would take off for second base. Then he did, stealing his 17th base of the season. The Father’s Day crowd erupted in that moment only to be severely let down as the next batter grounded out and Mateo was thrown out at third base trying to extend his position. After the game Brandon Hyde said he will never put a leash on Mateo’s speed and that is the correct call considering that is the biggest thing he brings to the team. It helps him on the basepaths and it helps him on defense. He is in the 97th percentile in outs above average and is tied for first in all of baseball when it comes to shortstops (six OAA, tied with Nico Hoerner and Jeremy Pena). He is above average in every range – to his left, to his right, coming in, and going back. It is what will keep him in the lineup nearly every day despite only batting .202 with a .561 OPS and 57 wRC+. He flashes power so if he could manage to tap into that a little bit more and get on base at least 30% of the time (.239 OBP currently) it would make him a much more valuable player but I’m not confident that development is on its way.

I am personally very confident that Bradish is going to make adjustments and figure things out enough to at least be a back end of the rotation starter or high leverage reliever in the long run but there is no question he is struggling enough at the moment that a trip back down to AAA Norfolk would be easily justified in an attempt to get things back on track. I also don’t think that is absolutely needed and I would try to let him work things out at the major league level but it is certainly an option. Over his last seven starts since he struck out 11 batters over seven innings against the Cardinals in St. Louis on May 10th he is 0-3 with a 9.20 ERA and 2.18 WHIP over 29.1 innings with 30 strikeouts and 15 walks. He was interviewed by FanGraphs and showed a great understanding of his own strengths and weaknesses and what he needs to work on to find success.

Laurila: As a rule, are you attacking certain zones with specific pitches?

Bradish: “You have to adjust based on the hitter, but with my stuff — the way it moves — I generally just try to throw it over the plate and let it do its thing. But there are certain hitters where it’s, ‘All right, you have to throw away to him, because he always sits middle-in.’”

That approach would explain the lower walk rate, specifically in AAA before he made his major league debut, but he is going to have to be a little more accurate on the corners to prevent major league hitters from feasting on his fastball. He has the capability to have four plus pitches but there is plenty of work to be done before we reach that point. It looks like he lined up to pitch against the White Sox, Mariners, and Rangers over his next three starts. Those are teams that have some good hitters but at least its not the AL East.