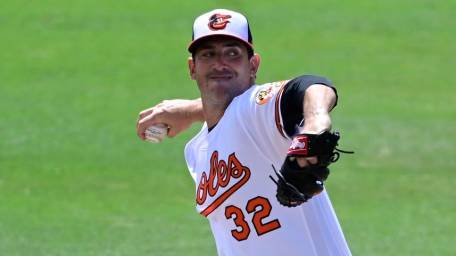 Welcome to ‘3 Up, 3 Down’, the weekly column breaking down the three hottest and three coldest Orioles players based on their performance during the previous week. It has proven to be an interesting exercise and good opportunity to highlight the highs and lows of a long baseball season. This week comes after series against the Yankees and A’s.

Lately whenever I see Matt Harvey’s name pop up I sing to myself “I can be your Andrew Cashner” to the tune of Enrique Iglesias’ “I Can Be Your Hero Baby”. Lets face it, that is the best case scenario here. When the Orioles signed Harvey to a minor league deal before spring training it seemed like a flyer on a guy whose time in the majors was done. Instead he dedicated himself to reinventing the way he pitched and earned his way onto the starting rotation. For the most part he has been good for around five innings and giving up two or three runs, hitting a wall around the third time through a lineup. But last week he had his best start of the season holding the Yankees to one run in six innings with five strikeouts plus he had another start where he got into the sixth inning, giving up two runs in Oakland. There is a lot of blue on his Baseball Savant page which is why it might be smart to try and trade him for a team desperate for a back of the rotation starter before things start to fall apart. Say we are able to trade him in June for a low level or international prospect then he will have provided us some bulk innings before giving way to some of the young guys waiting for their shot in AAA.

Mullins may be cooling off in the batting average department (he took an 0-5 on Sunday) but all of a sudden hes showing more power than he ever has at the major league level. He hit three homeruns this week giving him four for the season which already ties his career high (he hit four in 2018 over 191 plate appearances). He also hit another double this week giving him nine for the season, again tying his career high from 2018. He is consistently hitting the ball hard (43% of the time) and walking at the best rate of his career (9.1%). So while it would be foolish to think that Mullins is a guy who lead the team in OPS, there are enough underlying stats that suggest his hot start could be the result of improved tools and not just good luck. He is still covering a ton of ground in centerfield and even threw a runner out trying to advance to third on a single in Sunday’s game. It would be nice to see him try to use his speed a little more on the basepaths but its hard to complain about anything when it comes to Cedric the entertainer who is certainly the biggest bright side of the first month of the season on offense.

Looking at the splits for this past week was a little more refreshing than it has been for the first several weeks of the season, at least on offense. There were still plenty of lows, which we’ll get to, but on the positive side there was more than one or two guys having a good week. There were actually six players who had an OPS greater than .750 which is easily the most in any given week for the O’s in 2021. I chose Hays over the rest of that group because he seemed to be having better at bats than the previous week (walking twice) and he came up big on a few occasions despite only batting .231. He hit a pair of homeruns and had a clutch two run single with the bases loaded that actually scored three runs thanks to an error by the Athletics. Hays is a fun player to watch when he is going good so lets hope that continues. And as always, fingers crossed that he can stay healthy.

Franco had been one of the most consistent hitters in the lineup for most of April until this past week. He still wasn’t lighting the world on fire, hitting mostly singles with a batting average hovering around .260 but that was more than what most of the other hitters in the lineup could say. The problem when Franco slumps is that he can’t rely on his defense to carry the day. He has a great arm and is pretty accurate with it but unfortunately he is in the absolute bottom percent when it comes to outs above average at third base. He is basically old friend Renato Nunez with a better arm on the hot corner so the Orioles really need him to hit if he is going to provide value to the club. Despite being second on the team in walks with 10 the approach is not very good. He currently has the lowest isolated power of his career since he made his major league debut in 2014 so I have to imagine there will be some kind of power surge coming soon.

Stewart came off the injured list at the nadir of the Orioles bats struggling. They were striking out double digits every game so when he was inserted into the lineup it was almost a revelation of “wow, you can take pitches?”. Unfortunately that approach hasn’t continued and he is hitting the way he did to start 2020 which got him sent to the alternate site before long. Somehow he is swinging at the first pitch almost 50% of the time which is among the highest percentages in baseball. It kind of makes sense when you combine that fact with Brandon Hyde noting that he is struggling to catch up to fastballs. Perhaps he is trying to jump start his at bats by attacking the first fastball he sees until he can get his timing together. There were signs of life over the weekend. He hit a homer out to right in Oakland on Saturday and was robbed of at least a double off the top of the wall late in the game on Sunday that he crushed to deep center field. His time may be running short with Anthony Santander getting healthy and Yusniel Diaz getting ready to start his season with AAA Norfolk.

Bruce Zimmermann – 0-1, 7.56 ERA, 8.1 IP, 16 H, 3 HR, 3 BB, 7 K, 2.28 WHIP It has been a real struggle for Zimmermann over his last three starts. He is getting hit hard and he is getting hit often. Ideally he is another John Means type circa 2019. Not an overpowering fastball but if he can command it around the zone and use his offspeed pitches effectively it’ll help the limited velocity play up. The problem is the fastball command is nowhere near where it needs to be. Batters have a .489 batting average and .915 slugging percentage off of the pitch. His slider is supposed to be his best secondary but batters are hitting over .300 against that pitch too. The changeup and curveball have been effective but it doesn’t do much good when hitters know they can just sit and wait for the fastball to come in. I wonder if a trip to the bullpen might be in order whenever Keegan Akin recovers from his injury to give him a chance to work on his command and try to earn his way back into the rotation.