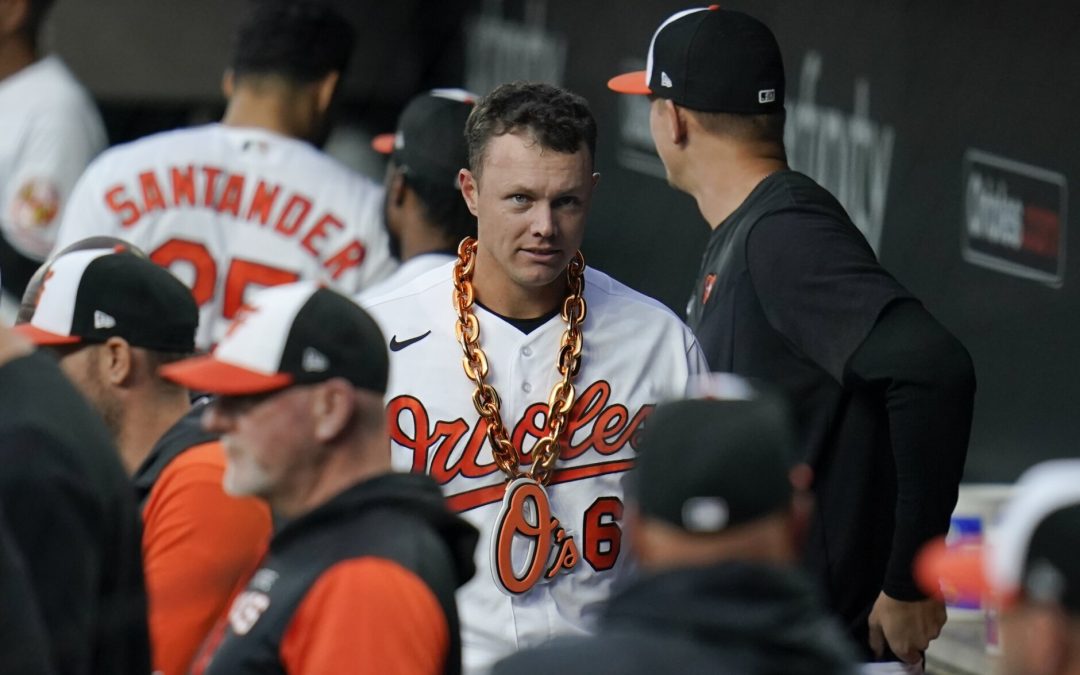 Welcome to ‘3 Up, 3 Down’, the weekly column breaking down the three hottest and three coldest Orioles players based on their performance during the previous week. It has proven to be an interesting exercise and good opportunity to highlight the highs and lows of a long baseball season. This week will highlight the performances of the series’ against the Twins and Royals.

Austin Hays is on one. At one point before lining out in the second game of Sunday’s doubleheader against the Kansas City Royals he had reached base in nine consecutive plate appearances. Starting with his third at bat in Thursday night’s game against the Minnesota Twins it went single, homerun, single, single, single, walk, single, walk, double. Despite starting the season two for his first 21 he has since batted .375 with a 1.008 OPS over 90 plate appearances which is good for a 199 wRC+. Overall on the season he is walking way more than he has before (10.4%) and striking out as little as he ever has (17.4%) en route to a .317 batting average and .876 OPS. That offense combined with quickly learning to play the new cavernous new left field at Camden Yards and showing off his cannon for an arm has him looking like he could be this year’s Cedric Mullins, a major breakout from a guy it looked like had settled into the player he was going to be. With Hays it is a little less surprising since his biggest issue has been being healthy enough to stay on the field consistently which he has been able to do so far this season but beyond that he has reached another level. His expected batting average is .298 which is in the top 16 percent of the league and most of his offensive metrics are in the red (which means above average) so it doesn’t seem very fluky. Just like with Mullins at this point last season (who still has a 127 wRC+ this season compared to his 136 wRC+ in 2021 despite numbers that look much worse) its too early to make any conclusions but especially if he can keep his walk rate at league average or better I’m optimistic he’ll be a key contributor to the next contending Orioles team.

Mountcastle may just be a slow starter. He is from Florida so maybe the cold weather in April still effects him more than others as the Birds migrate north for the spring. His .247 batting average and .613 OPS over 80 plate appearances for April is actually a pretty big improvement over his .198 batting average and .515 OPS over 96 plate appearances a year ago for the month. He even doubled his homerun total, two to one – literally. So far in May he is batting .357 with a 1.022 OPS and already matched his two homeruns from last month to raise his season totals to .276 and .722. The offense is down so much around the league that his .722 OPS actually comes out to a 111 wRC+ which is identical to his final 2021 number when he hit .255 with a .796 OPS. His improved defense at first base and not spending a month or two trying (and failing) to play the outfield means he has already almost surpassed his 0.7 fWAR from last year (it currently stands at 0.5). He is actually hitting the ball two miles per hour harder on average than last season and is in the top two percent of baseball when it comes to expected batting average (.336) and the top ten percent when it comes to expected slugging percentage (.570). His hard hit percentage is up six percent and his strikeouts are down two percent. Unfortunately he is walking even less than he did during his slow start in 2021 at only 2.8% which is in the bottom five percent of the league. His chase rate is in the bottom two percent, leading me to believe the swing decision training isn’t exactly landing with Mountcastle. His approach did improve as the season went on last year so if that trend continues and he still does as much damage as he is when he makes contact, the numbers will be impressive when the season ends.

Apparently as one John Means goes down for the year after Tommy John surgery another John Means emerges? That’s what it looks like through Bruce Zimmermann’s first six starts of the season. He has a 2.67 ERA (1.78 if you take out the three earned runs that were added to his line after what was originally ruled as an error was changed to a hit from his start against the Yankees on April 28th) over his first 30.1 innings with 30 strikeouts, eight walks, and a 1.19 WHIP. Compare that to Means’ first six starts of 2021 when he had a 1.70 ERA over 37 innings with 38 strikeouts, 10 walks, and a 0.84 WHIP. Zimmermann’s 2.51 FIP and 3.30 xFIP are actually better than Means’ 3.68 FIP and 3.88 xFIP during that same stretch. Obviously Means had two very successful seasons before 2021 even started and he ended the season with a 3.63 ERA over 146.2 innings while Zimmermann only has an injury plagued 2021 where he posted a 5.04 ERA over 64.1 innings but there are indications that improvements have occurred. His expected ERA is 4.34 which is still respectable but his strikeout percentage is up 4.4% while his walk percentage is down 1.3%. His changeup is clearly improved and has become a weapon against right handed hitters while his slider has been elite with only one hit against it, a single, on 78 thrown so far in 2021. It has a 53.8% whiff percentage and a 40% put away percentage. He is adding a sinker to mix in with his four seam fastball but has only thrown 17 of them so far. 2023’s rotation will be off to a great start if Zimmermann can establish himself in it this year. Means will be back at some point plus you have Kyle Bradish, Grayson Rodriguez, DL Hall, and Tyler Wells as young, very talented arms vying for a spot and any other acquisitions made before then.

It was a bad week for Santander with few hits and none for extra bases but you can see the difference in having an improved plate discipline and how it can help offset slumps. He was still able to get on base at a near 30% clip. His walk rate has stayed unbelievably high, 16.1% which is good for top 4% of the league, and his strikeout rate is above average as well, 4.3% lower than last season. His .125 ISO is the lowest its been since 2018 and his batting average on the season is only .227 but a walk rate 10.8% better than in 2021 means he has a .384 on-base percentage and a 128 wRC+ which is only two points lower than the 130 wRC+ he put up in his breakout 2020 campaign. Its hard to say how much the new plate approach is impacting his power versus how much is the new deader ball combined with humidors being in every park now creating a low offense environment but I’m sure the new hitting coaches are working with him on how to be selectively aggressive while still making good swing decisions. One interesting note on Santander is that he was taking some reps at first base last week. Hard to read too much into that but to me it signals the possibility that the team likes the improvements he has made and wants to find a way to keep him in the lineup when guys like Adley Rutschman, Kyle Stowers, and Terrin Vavra are ready for major league at bats. He could still be traded but I think a Trey Mancini trade is more likely at this point.

Speaking of Rutschman who was quickly promoted from AA Bowie to AAA Norfolk along with LHP DL Hall on Friday after just three games and is currently hitting .400 with a 1.043 OPS over three levels during his rehab stint, he is very close to making his major league debut and the team needs him. Robinson Chirinos and Anthony Bemboom have been an improvement behind the plate when it comes to working with the pitchers, blocking balls in the dirt, and framing (at least in Bemboom’s case) over Pedro Severino but they have been putrid offensively. Chirinos is batting .143 with a .440 OPS while Bemboom is hitting .114 with a .348 OPS and they have combined for a -0.7 fWAR. Chirinos has had a couple of nicely hit balls to left field that may have been homeruns if the wall hadn’t been moved back over the offseason but the 37 year old has an average exit velocity 6.2 mph lower than he did just last year and while many of the Orioles hitters are underperforming their expected batting averages, the veteran catcher’s sits at an abysmal .121. The Orioles signed him with the idea that he could be a valuable resource for the young prospect expected to be a franchise caliber player but at this point I think he is just playing for an opportunity to stick on the roster when the time comes for Rutschman to get the call. My prediction for that very much anticipated debut is a week from today, May 16th against the Yankees and the start of a homestand. If not then maybe Friday May 20th against the Rays. Any later than that and the team is dragging their feet. He’s ready.

After a very solid debut against the Red Sox where he only gave up two earned runs over six innings, Bradish’s second start started off even better. Over the first three innings he hadn’t given up a run and only allowed two singles while striking out three batters and walking none. With the help of two double plays he faced the minimum number of batters necessary. Then the Orioles offense had a rare long, six run offensive explosion and according to Bradish himself he didn’t do a good job of staying loose, instead taking it all in like a fan. That story checks out and should be a good learning experience for the young starting pitcher, especially since the team held on to win the game, because it took him nine batters to get through the fourth inning – the same amount it took him to get through the first three. He walked two batters, hit one with a pitch, allowed two singles, a sacrifice fly, and a monster homerun to free agent signing Carlos Correa before finally getting out of the inning only after a line drive hit the runner on first base instead of going through to right field. Major league hitters will capitalize on mistakes and mental lapses no matter how good your stuff is. And make no mistake, Bradish has very good stuff. His fastball has averaged 94.3 mph with well above average spin and his breaking stuff isn’t being hit. They both have above average horizontal and vertical movement compared to other major league pitchers, particularly his slider which moves horizontally almost twice as much as major league average (8.9 inches of break more). His changeup is a work in progress but has shown flashes with a 50% whiff rate but his bread and butter is the fastball, slider, curveball combo. As long as he can command those pitches he will be ok in the long run.