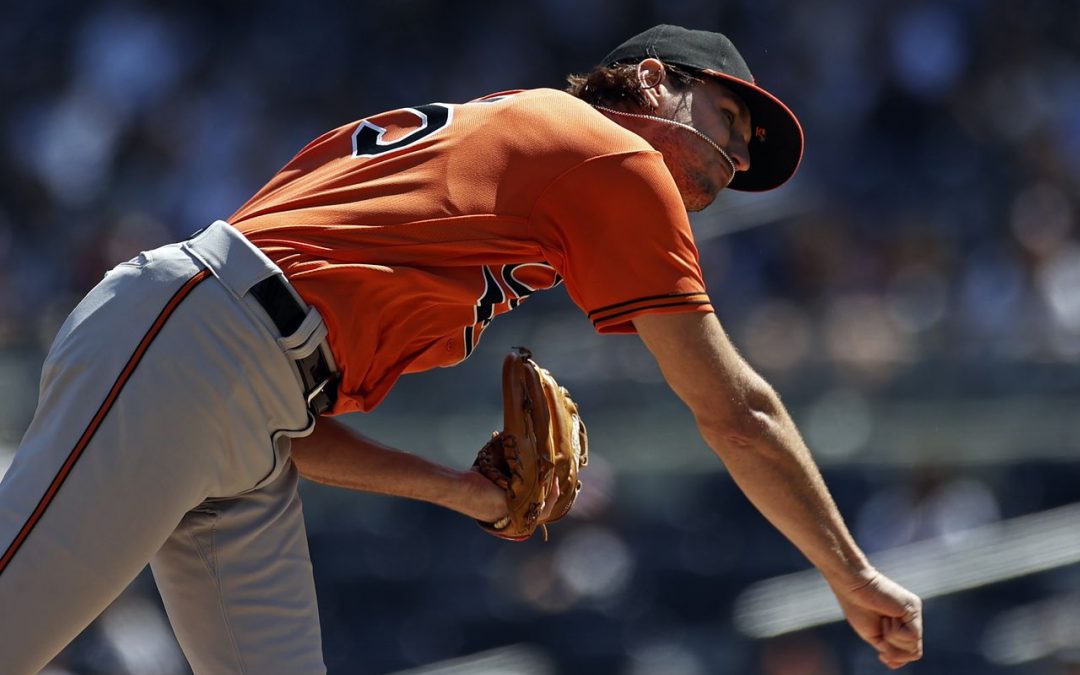 Welcome to ‘3 Up, 3 Down’, the weekly column breaking down the three hottest and three coldest Orioles players based on their performance during the previous week. It has proven to be an interesting exercise and good opportunity to highlight the highs and lows of a long baseball season. This (two) week(s) comes after series against the Yankees, Royals, and Blue Jays.

A few weeks ago it looked like Mullins’ run at the first 30/30 season in Orioles history was going to come down to the wire but with five homeruns and four stolen bases over the past two weeks he is sitting at 29 homeruns and 28 stolen bases. With three weeks to go in the season it would be more surprising if he didn’t get there at this point. He appears to have been selling out more with his swings in an attempt to up the power lately but its working. The batting average has dipped to .300 for the season but that is obviously still great plus he is going to hit his historic milestone. And can you blame him? The Orioles are all but guaranteed to have one of the two worst records in baseball. Its going to be a close race between the O’s and the Arizona Diamondbacks but I like the Orioles chances of coming away with the first pick in next year’s draft and the increased draft pool that comes with it. There aren’t many players currently on the team that will be a part of the next competitive team in Baltimore but Mullins is certainly one. Even if he falls back to earth a bit going forward his defense in centerfield to go along with a well rounded bat will play very well. If he can sustain close to this level moving forward then he could be Mike Elias’ version of Jose Altuve when comparing this rebuild to the early 2010’s Astros that he was a part of. He currently has a 141 wRC+ to go along with being in the 96th percentile in outs above average. That’s MVP contention. Could you imagine how bad the 2021 Orioles would be without him?

We might have to start calling Hays Mr. September. If you remember, Hays had a great September in 2019 which gave him the early lead to be the starting centerfielder in 2020. He was injured for the first half of the season last year and underperformed in the limited time he had but then he came back and had another great September. Its now the middle of September and what do you know? Here we go again. For his career now Hays has a .298 batting average and .862 OPS during the final season of the month. For the other five months combined he has a .240 batting average and .690 OPS. At this point in his career I feel like we can see what kind of player he is. He is never going to walk but his aggression at the plate leads to some nice pop and when he is on the hit tool is good enough to result in a good batting average. Honestly he is looking like an Adam Jones type of player but one who is much less durable and is confined to a corner outfield position at an earlier age. Same weakness to the low and away breaking balls. In a perfect world he would be a little more than a weak side of a platoon (always start against lefties and certain righty matchups) but on a team like the Orioles there is no reason not to have him play every day to see if he can unlock more than that. But even if he never takes another step forward there is plenty of value in a plus defensive corner outfielder with a OPS around .750 and the ability to play centerfield in a pinch.

The Orioles claimed Ellis off of waivers around three weeks ago in the constant attempt to fill innings in a season where that has been extremely difficult. He was initially given a chance to start a game in what was seen as a bullpen game against the Los Angeles Angels. He gave up three runs over three innings and I had assumed he would transition back to the bullpen but instead he was given another start. Then another start. Then another start. He held the high powered Blue Jays, who the Orioles gave up 47 runs to over the weekend, to two runs over 9.2 innings and shutout the Yankees over five innings in the last two weeks. At this point there is no reason not to run him out there every five days for the rest of the season and see what he is able to do. Ultimately I think he could be a decent reliever on the 2022 Orioles with his high spin, mid-90’s fastball and high whiff offspeed pitches. For now though they are going to ride the hot hand when everyone else has frostbite. He is 28 years old and has been rocked at the AAA level over the past few years but being in the Tampa Bay Rays system there is always a chance that he unlocked something with them. Seeing a body of water when you’re stuck in the desert is exciting but its important to distinguish the mirages from the oases before you start drinking.

Mateo came in from the waiver wire and had an exciting August, batting .324 with a .832 OPS and four steals, but has cooled off significantly so far in September. It does appear that he is dealing with some kind of minor lower body injury which could be a contributing factor since his speed is his biggest weapon. That speed will keep him valuable even if he has a 20 hit and 30 power tool as Baseball America’s Kyle Glaser opined on our podcast last week. He is versatile defensively, if not above average anywhere, and is one of the fastest players in the game (100th percentile sprint speed) which at the very least is an important last man on the bench even if the bat never comes along. Considering his speed it would be nice to see him attempt to steal a little more but he hasn’t always had the most effective success rate – five for eight this season, 78% in his minor league career. He walks even less than Austin Hays (4.3% in 2021) and doesn’t hit the ball particularly hard (85.4 mph exit velocity) but I haven’t completely given up on the idea of him remaining on the roster going into the 2022 campaign. A guy like Adam Hall might have a similar profile to Mateo and is rule 5 eligible this offseason but why wouldn’t you just keep the guy who has had some measure of success at the major league level on the roster as opposed to adding him.

Harvey’s season is officially over after being placed on the 60 day injured list. He was battling through some inflammation in his right knee and it was eventually too much to continue pitching with. I feel like it is something that he could’ve continued to pitch through but the Orioles want to give younger guys like Michael Baumann, Alexander Wells, and Zac Lowther some innings to end the year. Harvey provided everything the Orioles could’ve asked for coming into the season and more. He finishes the year 6-14 with a 6.27 ERA and 1.54 WHIP over 127.2 innings with 95 strikeouts which isn’t good at all but that isn’t why the Orioles signed him. Only one of those numbers was important to them – the 127.2 innings. He started 28 games and helped the team get through this rock bottom of a season. There has been talk in Birdland about bringing him back for 2022 but I don’t think that should be an option unless it is on a minor league deal to provide depth in spring training. 2022 should be the turning point towards contention and I don’t think a guy who struggled to get through five innings with well below average metrics of every kind should be part of that plan. Next year will bring the major league debuts of top prospect in baseball Adley Rutschman and top pitching prospect in baseball Grayson Rodriguez, as well as many other prospects, and I don’t think Mike Elias is going to want to let any of their service time go to waste. Hopefully Harvey can find a home somewhere else to try and continue his comeback story but veteran presence alone isn’t enough for me to want him back. You can find that from another pitcher who could give you results closer to league average.

Add Scott to the list of left handed relievers that probably should’ve been traded prior to the July 30th trade deadline and have now imploded ever since. I am less concerned about this development with Tanner Scott than I am with Paul Fry, who has continued his immense struggles in AAA to the tune of a 18.00 ERA, since we’ve always known what kind of pitcher he is and these struggles aren’t tied to the ban of sticky substances. When Scott is on he can be as dominant as any left handed reliever with an upper 90’s fastball and wipeout slider. The problem is he can also be as bad as anyone when his limited command fails him completely. Usually when he struggles it is because he can’t find the plate but in this case he was finding too much of the middle of the plate and the high powered Blue Jays weren’t missing. Scott could easily finish the last three weeks of the season being dominant again, continuing the struggles of the last couple weeks, or anywhere inbetween and I wouldn’t be shocked. That constant allure of everything clicking into place could be what prevented Mike Elias from pulling the trigger on a trade six weeks ago but it is also the kind of thing that will leave him with trade value moving forward if he has a solid first half at any point over the next few years.