4 Questions For The Conference Championship Games 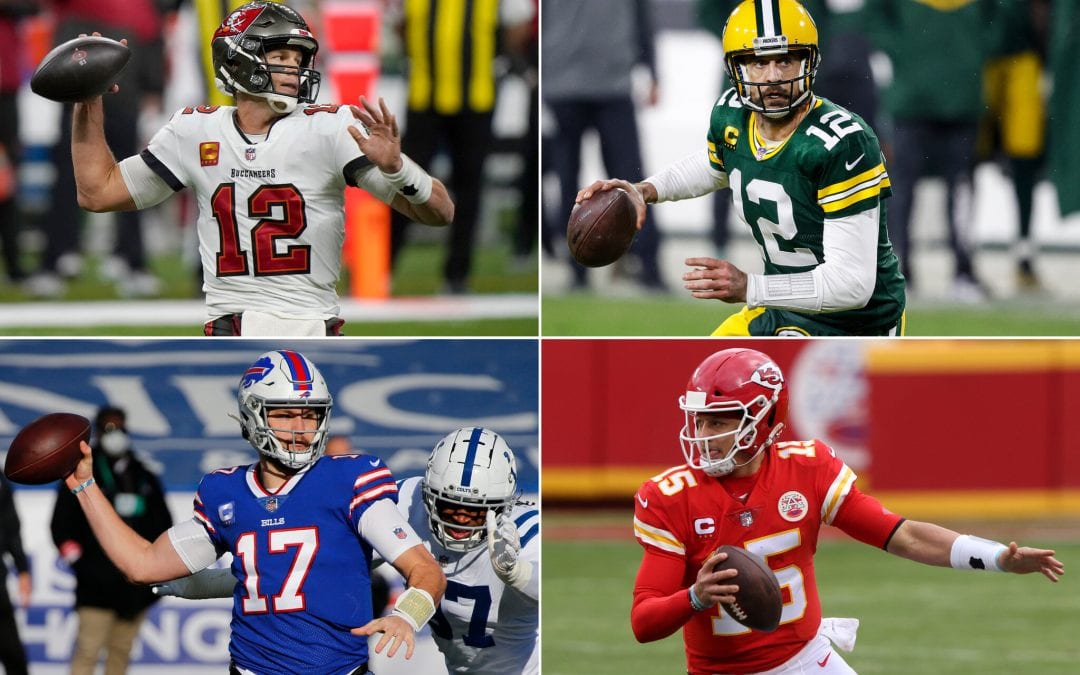 Only four teams remain in the 2020 playoffs. Only a quartet of organizations have a chance to hoist the Lombardo Trophy on Feb. 7, and though all have played fantastically at times this season, questions still surround each of them as they prepare for their conference championship games.

So, when the Packers play host to the Buccaneers on Sunday at 3:05 p.m. ET for the NFC title and the Bills face the Chiefs at 6:40 p.m. ET for the AFC championship, there are plenty of storylines on which we can ponder. Here are the four questions I’m wondering about between now and Sunday.

1. Can Chad Henne lead the Chiefs to the Super Bowl if he’s needed?
As of this writing, Chiefs star quarterback Patrick Mahomes still hasn’t been cleared to play vs. the Bills. If he can’t suit up, that likely means Henne will be the one to get the starting nod. And well, that probably wouldn’t be great news for Kansas City. Particularly since Henne has thrown only 121 passes since the 2013 season, and aside from Week 17 when the Chiefs were resting their starters, hasn’t started a game in six years. But considering Mahomes took the majority of the snaps at Thursday’s practice, it certainly seems possible that he will get the go-ahead for the AFC title game. Which leads us to another question.

Can Mahomes be effective only seven days after suffering a head injury?. As of Thursday, he was still in the concussion protocol, and he still has to be declared healthy by team doctors and an independent neural consultant before he can take the field. If not, it’ll likely be Henne’s ball. And while he played relatively well to hold off the Browns last week, including a 13-yard run on third down with about 2 minutes to play and then a gutsy first-down pass to Tyreek Hill on fourth down to seal the win, could he be effective for four quarters? “I’m always a competitor,” Henne said this week. Whether he’s effective in place of Mahomes, well, that might be an entirely different story.

2. If Kansas City can stifle Josh Allen and Stefon Diggs, can the Chiefs stop the entire Bills high-powered offense?
When Kansas City beat Buffalo in Week 6, the Bills quarterback and the NFL’s No. 1 receiver had some of their worst performances of the season. Diggs caught six passes, his second-lowest total of 2020, for a season-low 46 yards. He managed a touchdown catch, but he was mostly underwhelming. Allen, meanwhile, was 14 of 27 for 122 passing yards. Yes, he rushed for a team-high 42 yards, but Allen and Diggs were throttled during the Chiefs 26-17 win.

So, what will happen if Allen and Diggs are ineffective yet again? Buffalo could turn to running back Devin Singletary for relief. Yes, Singletary only rushed for 687 yards and two scores this season, and he’s been mostly irrelevant during the postseason so far. But without injured backup Zack Moss in the lineup, it’d be awfully helpful for Singletary to chew up some yards and some clock against Kansas City’s 21st-ranked run defense. Allen and Diggs have shown all season that they can lead the Bills to victory. But maybe it’d be helpful to get Singletary (or anybody in the running game, for that matter) a chance to contribute meaningful plays as well.

3. Can Tom Brady keep pace with Aaron Rodgers?
One of the fun aspects of this year’s playoffs is watching Brady, the greatest quarterback of all time, try to lead his new team to the Super Bowl without the benefit of Bill Belichick and the New England mystique pushing him from behind. Brady at 43 years old certainly isn’t the player he was at 33 or 28 or even 38. But he’s still good enough (remember, he threw for more yards in 2020 than he has in the past five seasons and he threw 40 touchdown passes for the first time since 2007). Against the Packers and Rodgers, though, Brady, who has been rather ordinary in the postseason so far, will have to be special.

Rodgers is coming off what should be an MVP year, and running back Aaron Jones and receiver Davante Adams are offensive playmaking machines. But can the Buccaneers keep up with them? It’s certainly possible. The Packers led the league by scoring 31.8 points per game, but Tampa Bay was third at 30.8. Green Bay hasn’t scored less than 22 points in any game this year, and the Buccaneers have gotten hot in their last five games, averaging 36.6 points per contest. Brady might be the GOAT, but Rodgers is better right now. Yet we’ve never seen an old quarterback as effective as Brady, so who’s to say he can’t upset the Packers in Green Bay?

4. What are some of the best prop bets you can make?
Sure, you love to watch football, but doesn’t it add just a touch of extra anxiety and fun (funxiety?) if you have a little bit of money riding on the outcome? Particularly if you’re taking part in a bonkers prop bet.

Here are a few of my favorites for the conference championship games. All of these, of course, are for, ahem, entertainment purposes, via BetOnline.ag.

Will any QB throw for 400 yards or more?

Who will record the most passing yards?

Will Tyreek Hill backflip while or after scoring a TD?

When will Bills have their first run play?

Will Josh Allen lead the Bills in rushing yards?

If it were me, here’s how I’d wager (though these are NOT recommendations): Will any quarterback throw for 400 yards or more? No. Who will record the most passing yards? Rodgers. Will Hill backflip? No, but it might be fun to take the longshot anyway. Over-under on Bills run play. Under. Will Allen lead the Bills in rushing? Yes.