A Deep Dive Into PITCHf/x with Jair Jurrjens

The O’s signed Jair Jurrjens to a major league deal Thursday, worth a minimum of $1.5 Million.  Jurrjens is an interesting guy because few pitchers have had the ups and down over the past few years like Jurrjens. Take a look at his numbers:

Quite the up and down trend, especially when you consider that his BB/9 stayed roughly the same over the four years, although it dropped down quite a bit in the successful 2011 campaign. So that got me to thinking… what causes these sort of swings? Injuries for one. Velocity issues another. Let’s take a deeper look at some of the other characteristics of Jair Jurrjens that might be causing his fluctuating performance. 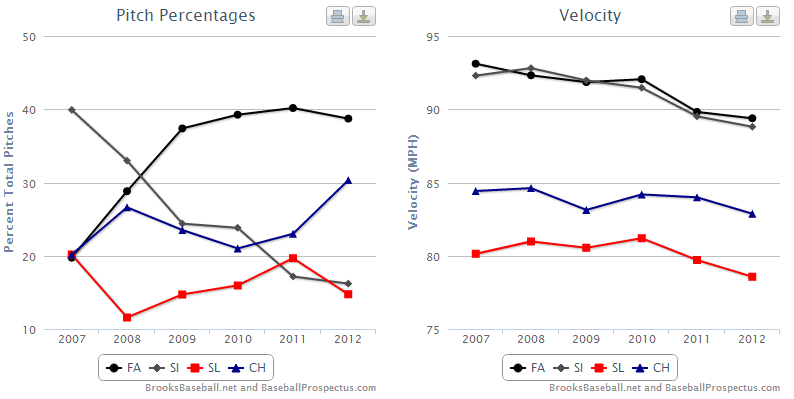 All data and graphs courtesy of BrooksBaseball.net / Baseball Prospectus, and Fangraphs

The two charts below show the change in Jurrjens’ pitch mix over time, and his velocity dipping respectively. You can see that Jurrjens has abandoned the use of his sinker, which intuitively makes sense as it was his worst pitch by TAv Against. What it did however was make Jurrjens a 3-pitch pitcher. As you can see above, this was compounded in 2012 where he threw his slider and sinker just 15% and 16% of the time respectively. That meant that 69% of the time the batter knew that either a fastball or changup was coming. Taking a look at the chart on the right you’ll see the gap between Jurrjens’ fastball and changeup dwindling, with his heater coming in just 6.51 mph faster than his changeup. That’s just not enough of a difference when you’re throwing one of the two roughly 7 out of every 10 pitches.

Below is a chart showing how far from the center of the rubber (vertically & horizontally) Jurrjens’ release points have been over time. These show another picture, with Jurrjens changing his release point on an annual basis. He’s moved to come over the top more, but has shifted from one side of the rubber to the other and back.

Changing release points, especially horizontal ones, don’t themselves tell us anything specific necessarily. Pitchers often move on the mound which changes their release point. The change in vertical release point is worth noting, because it denotes a change in mechanics either by design or by necessity.

As I stated above, Jurrjens has become more predictable in recent years. If hitters know what is coming, two things will happen. 1. They will stop swinging and missing. 2. They will start making harder contact. Number one is clearly illustrated in the chart below which shows whiff rate; take note of the steep decline in whiff rate for his Slider and Fastball in 2012:

Number two shows up in the chart below, which shows the ratio of Line Drives (LD) per Balls in Play (BIP): 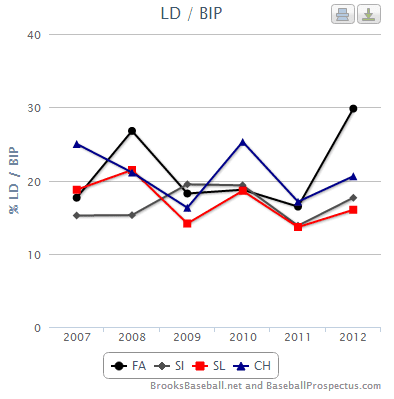 What does the graph above mean for Jurrjens? We can take a look at an approximated xBABIP for his fastball to show you just how significant this difference is. A rough calculation gives us an xBABIP against Jurrjens’ fastball of .279 in 2011. For 2012, the number would come out to an absurd .438 as a result of the 13% increase in LD%. If opposing hitters are batting .438 against your fastball (batters actually hit .421 against Jurrjens’ fastball in 2012) then you’re not going to be very successful.

Early reports are that Jurrjens has regained some of his velocity. That is promising, sure, but it’s not going to fix all of the problems Jurrjens’ had last year. If he has regained the feel for his Slider or Sinker, that will help him become less predictable, which in turn will help him keep the batter on their toes. Additionally, working with Rick Peterson might help Jurrjens find the sweet spot in his release point that has eluded him to this point in his career. He’s had some success, but some of it wasn’t particularly sustainable (BABIP driven) and he’s gone away from the things that made him promising back in the mid-late 2000s.

I don’t think Jair Jurrjens was worth a $1.5 Million contract, but if nothing else he can provide competition for our stable of young arms in limbo between the MLB rotation, MLB bullpen, and AAA rotation. Jurrjens still has options left, so he could end up as minor league depth. I however, would’ve rather seen Duquette use that money elsewhere. For now though, it seems he’s content to go with a Reimold/Betemit platoon at DH, with some of our starting surplus filling out the back end of the rotation and the bullpen. Only time will tell if Jurrjens was worth his $1.5 Million contract.

That said, his contract won’t make or break anything this year, and he represents an interesting risk/reward option for Duquette and Buck to explore.