A Look Back: Two Previous Ravens And Chargers Games 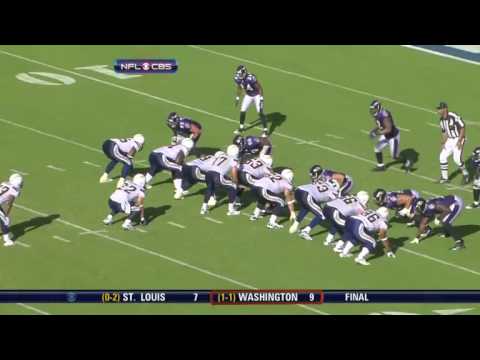 Hearing Ravens vs. Chargers, doesn’t exactly get the juices flowing, does it? Nothing like Ravens-Steelers, but probably not even as much as Ravens-Bengals.

So why am I bothering to write about them, besides the fact that the Chargers have showed up on the Ravens’ schedule?

Well, not so long ago the Chargers used to play in San Diego, and it was out there that these teams met twice in games that were swung on late plays involving an undersized running back. Both plays, and the games, swung the Ravens’ way.

The first of these meetings was in Week 3 of the 2009 season. The Chargers were missing star RB LaDainian Tomlinson, injured the previous week, but drew first blood when his replacement, diminutive speedster Darren Sproles, took a swing pass from QB Philip Rivers and streaked 81 yards for a score.

The Chargers continued to make big plays throughout the first half, but the Ravens defense was in pure bend-but-don’t-break mode. San Diego managed only three field goals the remainder of the half despite gaining 240 yards through the air and adding a Sproles 53-yard kickoff return,

The Ravens, conversely, were cashing in their opportunities. Willis McGahee was #2 on the RB depth chart at the time, but it was his two touchdowns that helped Baltimore to a 21-16 lead in an action packed first half of football.

The Ravens were positioned to take control of the game early in the third quarter after a Dawan Landry interception of Rivers set Baltimore up at the Chargers’ 22-yard line. Joe Flacco connected with Todd Heap (come on, you know you want to…HEEEEEP!) for a score that built the lead to 28-16, but the Ravens’ defense could not stop Rivers.

Vincent Jackson put San Diego back within one score late in the third quarter with a spectacular 35-yard touchdown catch in the middle of three defenders on 3rd and 18. The defenses took charge in the fourth quarter, and Baltimore led 31-26 when Rivers led the Chargers on one final drive.

Rivers was the clear star of the game, throwing for 436 yards (the 5th highest total any QB has ever gained passing in a game against the Ravens), and had moved his team down to the Baltimore 15-yard line, where they faced 4th and 2 with less than a minute to play.

One thing San Diego had not done well that day was run the football. Apparently, that fact, along with his star RB and two starting offensive linemen being in street clothes, escaped the attention of Charger Head Coach Norv Turner. As we down here in the south like to say, bless his heart.

Turner had gained a reputation as an offensive guru with Dallas’ championship teams of the early 90’s, although in hindsight, his future Hall of Famers Troy Aikman, Emmit Smith, and Michael Irvin probably deserved most of the credit for their success. Norv coached 15 years to an overall losing record and no Super Bowl appearances. This was early in what would be the finest regular season Turner ever coached-the Chargers would finish 13-3-but on this day he still managed to schmutz it up.

Perhaps he felt that if he called the dumbest possible play, it would catch the Ravens by surprise and get the two yards needed for the first down. He called that play, an inside handoff to the smallest player on the field, Darren Sproles. Ray Lewis sniffed the play out perfectly, came through the line untouched, and met Sproles in the backfield, dropping him for a five-yard loss. Ball game.

Ravens’ coach John Harbaugh is obviously too classy to send Turner a game ball for such a bonehead play call, but it would have been justified.

The less said about the game up to the point of Rice’s miraculous play the better, but I should give you some background.

The Ravens trailed 10-0 at halftime, and it took a stellar effort from the defense to keep it from being much worse. Baltimore totaled only 90 yards of offense in the half, 39 of them through the air as Joe Flacco was juuuust a bit outside with some key throws.

The Ravens did move the ball better in the third quarter and finally got on the board when a 54-yard pass from Flacco to Torrey Smith set up Justin Tucker’s 43-yard field goal. San Diego still held a 10-3 lead into the fourth quarter, and when they added a field goal midway through the fourth, their ten-point lead seem insurmountable.

That was all the defense would yield, however, topping their strong first half by absolutely smothering the Chargers in the second They allowed only 70 total yards in the half and finally held Philip Rivers in check. A touchdown pass from Flacco to Dennis Pitta drew Baltimore within three points, and they got the ball back at their own 40 with 3:09 left and a chance to tie or win.

The Ravens picked up a first down, but then a holding penalty and a sack, where Michael Oher saved the game by falling on Flacco’s fumble, put the Ravens offense in a 4th and 29 hole with 2:07 left. Obviously Flacco needed to look deep, but when he found nothing open, he dumped off to Ray Rice, who started running. And running. And running.

I had disgustedly reached for my remote, ready to shut this game down, when I noticed San Diego has still not managed to tackle Rice. For perhaps the first time in this otherwise tedious game, I grew excited. When Rice crossed the Charger 40-yard line, I’m thinking OH. MY. GOD. He might actually make this! Rice was finally tackled in the general vicinity of the San Diego 34, which is where he needed to reach to gain the first down. Much confusion ensued over first the mark, then where the first down marker was, which had been picked up prematurely,

The next time you, the Ravens’ greatest fan, believe your team has never gotten a break on a call, I refer you back to this mess. It’s hard to conclusively say Rice did not get the necessary yardage, but it’s impossible to conclusively say he did. Regardless, after much whining and gnashing of teeth, the Ravens were still alive. Justin Tucker kicked the game tying 38-yard field goal, and with only 1:12 remaining in OT (back when it was 15 minutes), this game that seemed like it would never end did so with another Tucker field goal, also a 38-yarder, and the Ravens walked away with a 16-13 win.

Their poor offensive play for much of the game was a warning of what was to come, a miserable stretch where the Ravens lost four of their last five regular season games, but since the season ended with a trophy and a parade, I guess everything wound up ok.

As a quirky result of scheduling, Baltimore played in San Diego 7 of the first 9 times they met; beats going to Green Bay at least. The Ravens lead the series 7-6.

The Chargers are the third NFL California team to move away from their first home in the state, then later move back to it. The Rams moved from Cleveland to Los Angeles in 1946, then after a stop in Anaheim relocated to St. Louis in 1995 before returning to LA in 2016.

The Raiders began in Oakland, moved to LA in 1982, then returned to Oakland in 1995, leaving Los Angeles without an NFL team for 20 years. They are now located in Las Vegas, at least for the time being. We do know that their ex-ex coach Jon Gruden will likely be relocating very soon.

The Chargers were born in LA, then moved to San Diego in 1961 and jumped to LA in 2017 to share the spoils of the bazillion dollar SoFi Stadium, where they are currently seen as the unloved stepchild in comparison to the Rams.

The 49ers are the only California team to pretty much stay put, although they did move to Santa Clara’s new Levi’s Stadium in 2014, about 38 miles from their former home of Candlestick Park.

Going into their upcoming game with Cincinnati, the Ravens have won the last five in the series, with the three most recent ones not being close. Surprisingly, perhaps, the Bengals had led the all-time series before that losing streak and more than once broke Baltimore fans hearts. I’ll take a look back at Bengals vs. Ravens next week.

Until then, you can keep up with me on Twitter @jimjfootball and remember, it’s good to look back as long as you live forward.