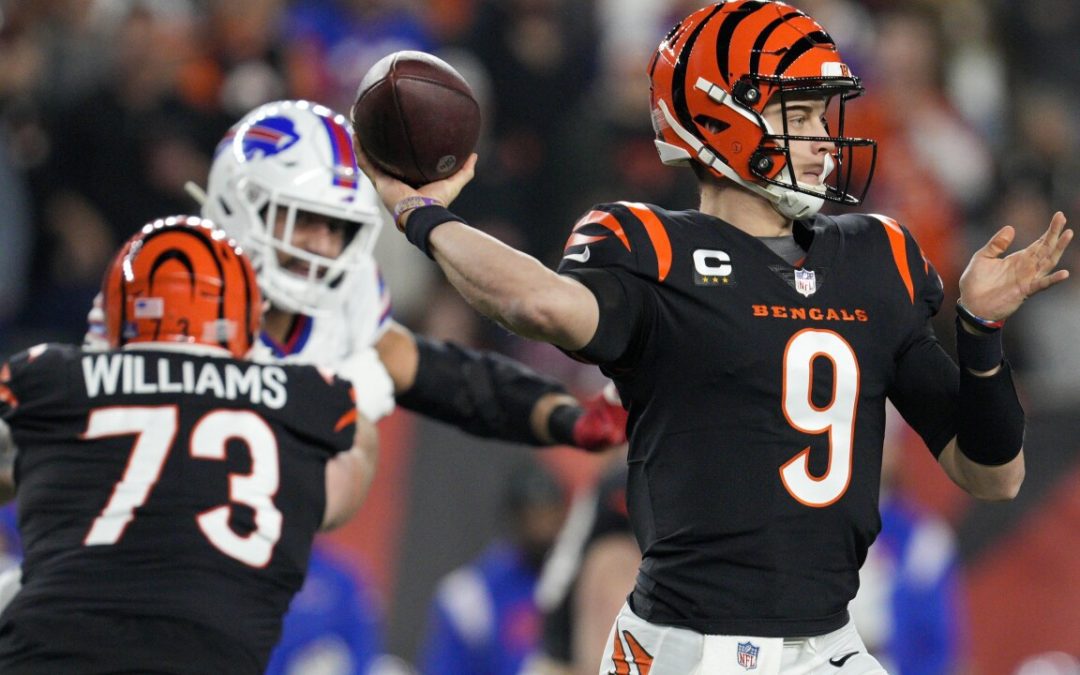 Championship teams find ways to win games. Sunday night, although they are not yet champions, the Cincinnati Bengals played like one in their 24-17 Wild Card playoff win over the Baltimore Ravens.

Don’t misunderstand me, I’m not saying the Bengals played better than the Ravens. From the second quarter on, that was clearly not the case. What I mean is, they found a way to make the play that won the game. The Ravens, on the other hand, came up short on two plays that could have won, or at least tied, that contest.

Obviously, the play of the night was Sam Hubbard’s 98-yard touchdown return of Tyler Huntley’s fumble short of the goal line. Let’s not forget to credit Cincy linebacker Logan Wilson for slapping at the ball and knocking it away from Huntley while he was trying to stretch it across the goal line. Hubbard had the presence of mind to catch the ball in the air and rumble the distance, the looooong distance, to the end zone despite the valiant effort of Baltimore tight end Mark Andrews to chase him down.

I wonder, with the 50th anniversary of The Immaculate Reception still fresh on my mind, if this will become the Bengals’ version of that iconic play. Not quite as dramatic, after all, what is, but still a play that will be talked about amongst Cincinnati fans for generations to come.

Of course there was luck involved in that play coming together for the Bengals, just like there was plenty of luck (divine intervention?) that enabled the Immaculate Reception to be, well, a reception. Getting a break is only half of the equation, though. A team or player has to be able to take advantage of it. Hubbard did that. It’s what champions do. Some people forget that the Steelers were still two years away from their first Super Bowl even with Franco Harris’ immortal play, and that could still be the case with Cincinnati.

That was play one where the Ravens came up short. The second play was the final one of the game and ultimately the season, Huntley’s Hail Mary pass. That situation was brought about in part by abysmal clock management, but still had a chance to produce the equalizing touchdown. Of course, due to injuries Baltimore was down to their second and third string wide receivers, and it was one of them, James Proche, who was in position to make his own amazing, if not miraculous play to tie the game.

From my view, Proche seemed just a big slow to react and dive for the ball, which may have still been out of reach even with quicker reactions, but it may not have been. The deflected pass fell harmlessly to the ground to seal Cincinnati’s tense win.

Once again, Baltimore’s play calling and clock management were correctly called into question by just about everybody, starting with NBC’s Mike Tirico and Chris Collinsworth to the reporters covering the Ravens and Bengals to the Baltimore fans who grow more frustrated with every winnable game that comes down to the wire and their Ravens coaches don’t put their team in the best position to win.

Head Coach John Harbaugh is not immune to criticism here, far from it, but the bullseye continues to be Offensive Coordinator Greg Roman. First off, his run oriented offense built around Lamar Jackson does not work well without him, as demonstrated by the Ravens inability to score more than 17 points in the seven games since Jackson’s injury. Secondly, why in the world did J.K. Dobbins not touch the ball in goal line situations. He was absolutely right when he said after that game, “That should be me,” instead of Huntly trying to score from the one-yard line. Thirdly, the team’s frequent inability to score in the red zone and their notoriously poor clock management continues to be a major problem. All three of these issues can be tied to Greg Roman. I join the growing chorus that calls for his replacement and the overhauling, if not complete replacement, of his offensive system. Yes, it worked amazingly well in 2019. In 2022, not so much-time to adapt.

Baltimore also enters what I have seen referred to as “the summer of Lamar.” Will he or won’t he? Columnist Mike Preston of the Baltimore Sun, who turned on Jackson some weeks ago by referring to him as a “baby” among other things, called for the Ravens to trade him in Monday’s post-game column. Baltimore has two opportunities to use the franchise tag to keep him without a long-term commitment, so he is not a threat to walk, but would the team be better off without him?

It depends on the answer to another critical question-if not Lamar Jackson, then who will be the Ravens quarterback? If the answer to question two is Tyler Huntley, although he played his best game Sunday night and it’s not even close, the answer to question one is clearly no. Other answers to question two could be worth considering pulling the trigger on a deal, but even then, probably not without taking a short-term step back for potential long-term gain. With a defense that seems poised to continue at or near a championship level, I’m not at all certain owner Steve Biscotti and general manager Eric DeCosta would be willing to go that route. It promises to be a long, uncomfortable, and critically important off-season for the Baltimore Ravens.

The Cincinnati Bengals staggered but survived the Super Wild Card round and advance as the lone representative from the AFC North in next week’s Divisional Playoffs. They will travel to face the Bills next Sunday with no extreme weather predicted for Buffalo in the long-range forecast. I believe Cincy is the best team, but they will be handicapped with at least two, possibly three starters from their offensive line out with injuries. Right tackle La’el Collins tore his ACL in Week 15, right guard Alex Cappa hurt his ankle last week, and Sunday night left tackle Jonah Williams suffered what is believed to be a dislocated kneecap.

Cincinnati has learned how to cope with extra defensive pressure on star quarterback Joe Burrow. They shorten their pass routes and Burrow gets rid of the ball very quickly. The Ravens forced them into that approach Sunday night by bringing extra pressure on the substitute linemen and continuing the successful two-deep coverage that was effective in the teams’ two previous meeting this year. The Bengals only gained 234 yards in their win-they don’t have the running game to compensate for having their explosive passing plays taken away.

You can bet Buffalo defensive coordinator Leslie Frazier, considered one of the best in the business, will be studying the Ravens defensive schemes against Cincinnati and seeing what he can adapt within his own schemes. Like the Bengals, though, the Bills will need to play better than they did in their 34-31 Wild Card win over Miami, which had no business being anywhere near that close with the Dolphins missing their top two quarterbacks and leading rusher.

I haven’t felt that Buffalo was all that this season, it seems to me that they took a small step back from 2021. Both teams are on winning streaks; Cincinnati has won nine in a row, Buffalo has won their last eight. I’m picking the Bengals as my Super Bowl winner, figuring they will find a way to win in Buffalo, and to continue their mastery of Kansas City in the AFC Championship. Seems like the NFC will come down to Philadelphia and San Francisco-I think the Bengals are better than either team.

Then again, like many of you reading this, I turned off the Chargers-Jaguars game in the second quarter Saturday night so what do I know.

I’ll be back after the Super Bowl to take a final look at the AFC North for 2022 and an early peek ahead to the 2023 season.