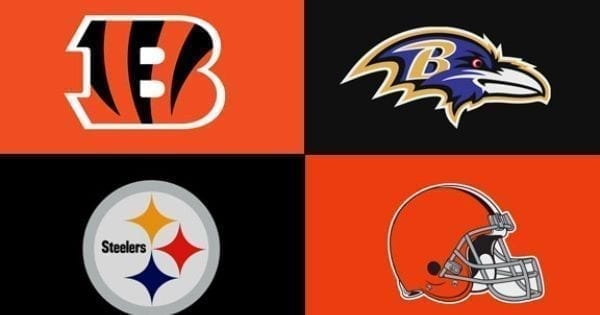 The AFC North is the most confusing division in football. Heading into Week 10 the pecking order seemed clear: Ravens at the top, Bengals at the bottom, and some combination of Browns and Steelers in the middle. But while Cincinnati enjoyed a bye week, Pittsburgh tied the Lions in an embarrassing display, Cleveland got destroyed by the Patriots, and the Ravens fell to the Dolphins by double-digits.

Week 10 left us with four teams that are within 1.5 games of each other, none of which look ready to pull away from the others. With eight divisional games left between them, December and January are setting up to host one of the most exciting AFC North races in recent history. Let’s take a look at how we got here.

The Ravens entered the season as the favorites to win the AFC North and up to this point have held on to that reputation, though not very tightly. After starting 5-1, losses to the Bengals and Dolphins have them sitting at 6-3 entering Week 11.

Lamar Jackson is the entire Ravens offense at the moment. Preseason injuries to J.K. Dobbins and Gus Edwards left the running back room in a precarious position, and while Marquise Brown has enjoyed a breakout campaign, offseason acquisitions Sammy Watkins and Rashod Bateman have yet to make a significant impact. Jackson has been left to run the offense almost entirely on his own and to this point he hasn’t had much trouble doing so. His 2447 passing yards and 639 rushing yards are both eighth-best in the league and combine to account for almost 83% of the Ravens total offense this year.

The biggest knock on Lamar coming into the season was his inability to orchestrate comebacks in the fourth quarter. He has wasted little time disproving this narrative, leading four come-from-behind victories in just nine games. Three of these games (in which the Ravens played the Chiefs, Colts, and Vikings) saw Baltimore down by double digits before Jackson’s heroics turned the tables. The Ravens have gone from being one of the league’s worst teams playing from behind to one of the best and it should pay dividends come playoff time.

Often one of their greatest strengths, pass defense has been a struggle for the Ravens. They have allowed 2550 passing yards, the fourth-most in the league, and 8.1 yards per attempt. Some of the blame can fall on injuries to Marcus Peters and DeShon Elliott but some of it needs to belong to Marlon Humphrey, Tavon Young, and the rest of the healthy secondary. There is too much talent on the Ravens defense for them to be among the league’s worst in stopping the pass.

Baltimore’s struggles in coverage have been compounded by their inability to create turnovers. The Ravens currently sit at second to last in the league in takeaways with just 7 through nine games. While forcing turnovers is not a necessity for a defense it can aid a unit that is struggling to get their opponents off the field on third down. Almost all of the big plays for Baltimore have come from the offense and that will need to change down the stretch if the Ravens are going to make a playoff push.

The Steelers had a chance to take control of the division last week but failed to do so, tying the Lions in one of the sloppiest games of the season. Still, their five-game unbeaten streak has them in second in the division at 5-3-1.

“Blitzburgh” continues to rely on their pass rush to win games. Despite not having star defensive lineman Stephon Tuitt, the Steelers are 6th in the NFL in taking down the QB with 26 sacks. The two stars of the defense, T.J. Watt and Cameron Heyward, lead the unit with 12.5 and 4.5 sacks respectively with Watt trailing only Myles Garrett for the league lead. The losses of Steven Nelson and Mike Hilton this offseason left the secondary in a precarious position but the ability of the front seven to create pressure has concealed these flaws so far.

Meanwhile, the offense has relied on the playmaking of two rookies: Najee Harris and Pat Freiermuth. Harris has been a true bell-cow back, rushing 176 times and catching 44 passes. He is top-ten among running backs in both rushing and receiving yards and has proven why he was worth a first-round pick in last year’s draft. Freiermuth, Pittsburgh’s second-round pick, took longer to become acclimated to the NFL but in recent weeks he has turned into an integral part of the Steelers offense. In his last four games, the tight end out of Penn State has totaled 21 catches for 176 yards and 3 touchdowns. With the potential retirement of Ben Roethlisberger looming, these two rookies can give Steelers fans hope for the future of the offense.

Despite the success the front seven has had in creating pressure they have struggled mightily against the run. This was on display last week when the Pittsburgh defense allowed 229 rushing yards to the winless Lions. On the year the Steelers are allowing 4.6 yards per carry, tied for the fifth-most in the league. One of the main reasons that number is so high is because of the number of big runs they have given up. Pittsburgh has allowed 11 runs of 20+ yards on the season, three more than any other team in the league. The losses of Stephon Tuitt and Tyson Alualu have spread this unit thin but when you have playmakers like T.J. Watt and Cameron Heyward there is no reason you should be among the league’s worst at stopping the run.

The Browns were a popular Super Bowl pick in 2021 after an impressive 2020 campaign. However, they have lacked any consistency so far this season. At 5-5, this team is impossible to figure out.

The Browns are a run-first team and when you have Kareem Hunt, Nick Chubb, and one of the best offensive lines in football, that’s a recipe for success. Even with Hunt out for the past few weeks, Cleveland has continued to pile up yards on the ground, using third-year back D’Ernest Johnson to fill in. Overall, the Browns are averaging 5.3 yards per carry and have totaled 1541 rushing yards, both best in the NFL. Despite struggles in the passing game, the Browns offense remains lethal due to their success in the trenches.

On defense, Myles Garrett continues to make his case for Defensive Player of the Year every week. He is first in the NFL with 13 sacks and is a nightmare for defensive coordinators to gameplan for. Garrett seems like he will be one of the league’s best defenders for years to come, a good sign for a defense that has struggled as a whole.

The Browns biggest weakness is their passing game. While some may disagree, in my eyes Baker Mayfield does not look like the long-term solution at quarterback. His 95.7 passer rating is deceiving given that he is surrounded by one of the league’s best running games and a talented coaching staff. He has thrown just 9 touchdowns against 4 interceptions and is more of a game-manager than someone who can go out and win you games. The lack of playmaking from Mayfield is compounded by a weak group of wide receivers. Following the release of Odell Beckham Jr, the receiving core lacks any star power. Second-year wideout Donovan Peoples-Jones has emerged as the team’s best outside weapon but he has caught just 16 passes this year. This passing game is a mess all-around and continues to hold back an otherwise extremely talented roster.

The surprise of the AFC North, the Bengals find themselves third in the division at 5-4. Three weeks ago they looked like the favorites to win it but after losses to the Jets and Browns, Cincinnati will need to rebound quickly if they are going to keep up with their rivals.

After losing long-time superstar A.J. Green in the offseason, the Bengals turned to Ja’Marr Chase in the first round of the draft. Chase, along with Tee Higgins and Tyler Boyd, has transformed the receiving core into one of the league’s best. The three have combined for 1675 receiving yards, causing trouble for every defense they encounter. Throw in one of the league’s best running backs in Joe Mixon and you’ve got a lethal slew of weapons for Joe Burrow to work with.

Another area the Bengals have shined in is not committing penalties. In his third year with the team, head coach Zac Taylor has instilled extreme discipline in his players and it is paying off. Cincinnati is the least penalized team in the league, drawing just 39 flags for 338 yards. The Bengals have come a long way since 2015, their last playoff appearance, when two pointless penalties put the Steelers in field goal range with less than a minute left, costing them the game.

While they have outperformed all expectations this year, there are still questions about the experience on this Bengals roster. As I mentioned, their last playoff appearance was in 2015 and just three players from that team are still on the active roster. Meanwhile, while Zac Taylor seems like he has finally gotten his footing, he remains a fairly new coach with a lot to prove. The future is bright for the Bengals, but this year may be a bit too early for the team to be serious Super Bowl contenders.