AFC Stories Heading Into The Draft 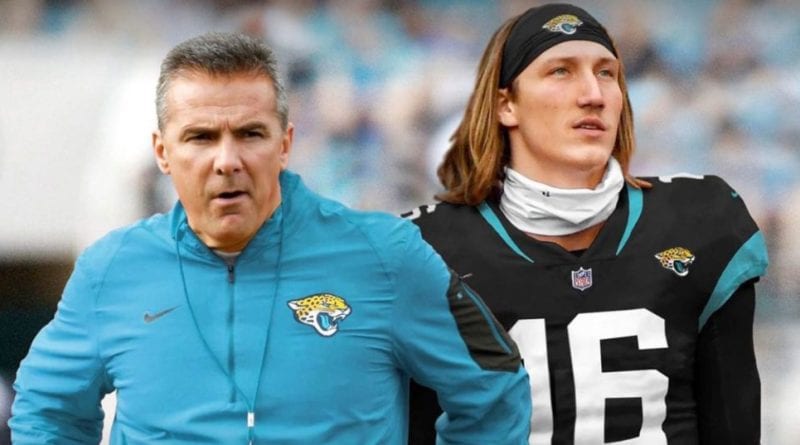 Four new AFC coaches will get the chance to make their first imprints on the futures of their new teams this week when the NFL Draft kicks off on Thursday. Robert Saleh is trying to jumpstart the Jets offense with a new quarterback and a fresh running game. Urban Meyer is trying to prove his immense college success can work at the NFL level in Jacksonville. Brandon Staley will try to make over the Chargers defense. And David Culley … well, David Culley has a mountain to climb in Houston.

As usual, the NFL Draft allows every fan to have just a little bit of hope. Even if their team went 2-14 last year or their favorite organization is in upheaval. Or, conversely, if their squad is coming off a playoff run.

This week will allow optimism to bloom. Until then, here are some AFC storylines heading into draft week.

How will Urban Meyer handle his first draft?

No matter what you think about Jacksonville’s decision to hire Urban Meyer, after spending three years years away from the sidelines and having spent his career in college, it’s clear that Meyer has never been through this process before. At least from the NFL side.

When the draft begins, he says he’ll be relying on his coordinators, Darrell Bevell on offense and Joe Cullen on defense, for help, and GM Trent Baalke will obviously play a large role in figuring out who the Jaguars will select. There’s almost no doubt that Jacksonville will take Trevor Lawrence at No. 1 overall. So, at least that part should be easy for Meyer.

But after that, the Jaguars will have the No. 25 pick, two picks in the second round, another in the third round and two more in the fourth. Meyer said he’s learning how to trust his squad’s draft board. We’ll see just how much he really trusts it this week.

If you were shocked by the allegations about Houston quarterback Deshaun Watson, you probably weren’t alone. Now, the Texans have to figure out what to do about their star who’s been accused of sexual misconduct by more than 20 women.

For now, the Texans are keeping Watson on the roster, even as companies who used to endorse him (Nike, Beats By Dre and Reliant Energy, for instance)) have severed their relationships with him. The NFL also has kept him off the Commissioner Exempt list, so technically, he could play if the season began tomorrow.

But at this moment, it seems unlikely that Watson will be allowed to take the first snap of the 2021 season. Backup Tyrod Taylor could be one replacement in Houston, and even though he’s not a superstar and probably never will be, he’s been serviceable when called to be an NFL starter. The Texans don’t pick until the third round (No. 67 overall) of the draft, so finding a game-changing signal-caller who would immediately step into the starting role would be a challenge.

Otherwise, they could look to a weak free agency class that includes Blake Bortles, Nick Mullens and Robert Griffin III. Also, as has trade requests represent, Watson wants out of Houston anyway.

As for the Texans’ feelings on the matter, well, they’re not saying. As GM Nick Caserio recently said, when asked about Watson, “If you want to speculate, you should probably go buy Bitcoin.”

Who can be the next Tom Brady?

After missing the playoffs for the first time in 12 years and sustaining a losing record for the first time in 20 years, the Patriots will continue trying to find Tom Brady’s successful successor. It didn’t happen in 2020 with Cam Newton, who rushed for 12 scores but who only throw eight touchdowns against 10 interceptions.

So, where does New England stand with finding a quarterback for next seasons? Newton will return for 2021, but so far, he hasn’t shown he can be a long-term solution.  Jared Stidham hasn’t done well enough (at least not yet) for the team to take a chance on him to be the full-time starter. At least one report thinks the Patriots are interested in University of Florida quarterback Kyle Trask (New England picks No. 15 in the draft), and others have predicted the team could trade up to get a quarterback in the top 10.

But others speculate that the team isn’t going to overextend itself in the draft to get a quarterback it’s not completely sure about. For Belichick, it’s all about value.

“Who do you move up for? Who do you take if you stay and what players are on the board?” he said. “If players are on the board that you feel like don’t add a lot of value or maybe they’re not the kind of fit for your team that you’re looking for in that particular situation, then maybe you say, ‘OK, maybe we consider moving back.’ There’s certainly been many of times where we felt like we were able to get the same player or comparable value at a lower point in the draft so we moved backwards.”

So, what does that tell you? As with many things that emanate from Belichick’s mouth, he’s not going to make it easy for you to figure it out.

The Bengals bungled their uniform release, through no fault of their own

OK, that’s not entirely true. But read this story from The Athletic’s ($) Paul Dehner. He breaks down what happened when, a month before the Bengals were to release their new unforms to the public, somebody leaked online what was apparently the new-look jersey and pants. It details how the Bengals front office responded to what was basically a PR nightmare.

“You just go into that mode of when your brain knows you should be so angry and emotional, but you are like, ‘I don’t have time for this,’” Bengals director of strategy and engagement Elizabeth Blackburn told Dehner. “Just buckle down and work through this problem to make the best out of the solution. That’s all you can do. It’s a little minicourse on leadership training and crisis management.”

As you probably know, Mike Tomlin has signed a contract extension that will last through the 2024 seasons. That means, assuming the Steelers coach makes it to the end of the extension, there still would be only three Pittsburgh head coaches since 1969 (Chuck Noll, Bill Cower and Tomlin).

For comparison’s sake, there have been 10 Bengals non-interim coaches since 1969, 11 Broncos coaches, 14 Lions coaches and 16 Browns coaches.

It’s pretty amazing consistency from one of the best franchises in NFL history.