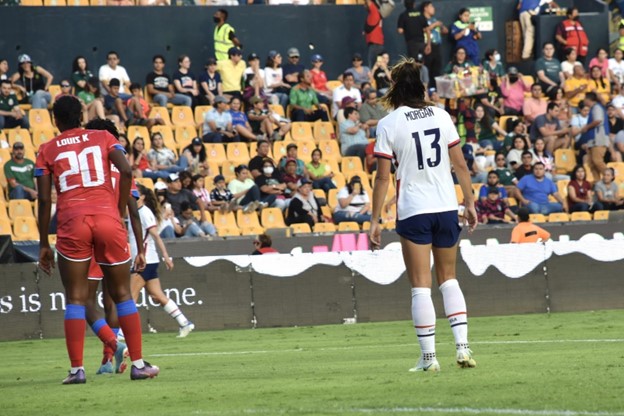 [MONTERREY, Mexico] Somewhere in Mexico, 1,900 miles away from the nation’s capital, Alex Morgan and the USWNT set off their fireworks in a 3-0 victory over Haiti to open group play of the CONCACAF W Championship.

“She’s back!” Megan Rapinoe said about the world-class striker who’s birthday was July 2.

Morgan’s first goal in the ‘16 minute came off a magnificent back-foot shot that slipped past the post and Haiti’s goalie, Lara Larco. Seven minutes later, she floated a header into the back of the net, giving the stars and stripes an early 2-0 lead.

Morgan’s role as veteran in the new youth movement extends further than provided moral and support for the younger players. It was evident during the Friendly against Columbia she would play a much more important role and could return as the star of the USWNT once again.

“She’s in such good form right now,” captain Becky Sauebrunn spoke about Morgan’s early goals. “It’s like she played with us, then killed the NWSL and just brought that form back to the National team.”

Long-time national squad teammate, Rapinoe, joined the match late in the second half and quickly left a mark, sending a cross to Margaret Purce to give the USWNT a 3-0 lead.

Despite the win, USA’s performance left some questions on the board. Rapinoe gave the squad a “7/10” and head coach, Vlatko Andonovski, believes the team could have played much better.

The heat played a part as well for the squad, their first time playing under the hot mexican sun in the city of mountains. As the game went on, you can see the heat wearing down on the starting IX, especially on the offensive end.

Hati had multiple opportunities late in the first half to put points on the board. Melchie Dumornay took a shot on goal deep in USA’s territory but Casey Murphy made a great hands save outside of the goal. A few minutes later, star striker, Roselord Borgella, missed a penalty shot after Murphy stopped the attempt, leaving Hati with another missed opportunity, and eventually turned out to be their last.

We played against a really good disciplined team with some world-class individuals,” Andonovski said about the play of Hati.

USA first win – despite it being less than what is expected of the world’s best team – puts them at the top of Group A. Jamaica follows after they surprised the host country Mexico with a 1-0 victory.

The USWNT will step back on the pitch Thursday as they take on Jamaica in what could be another tough battle for the stars and stripes.