Analytical Review of Chargers at Ravens 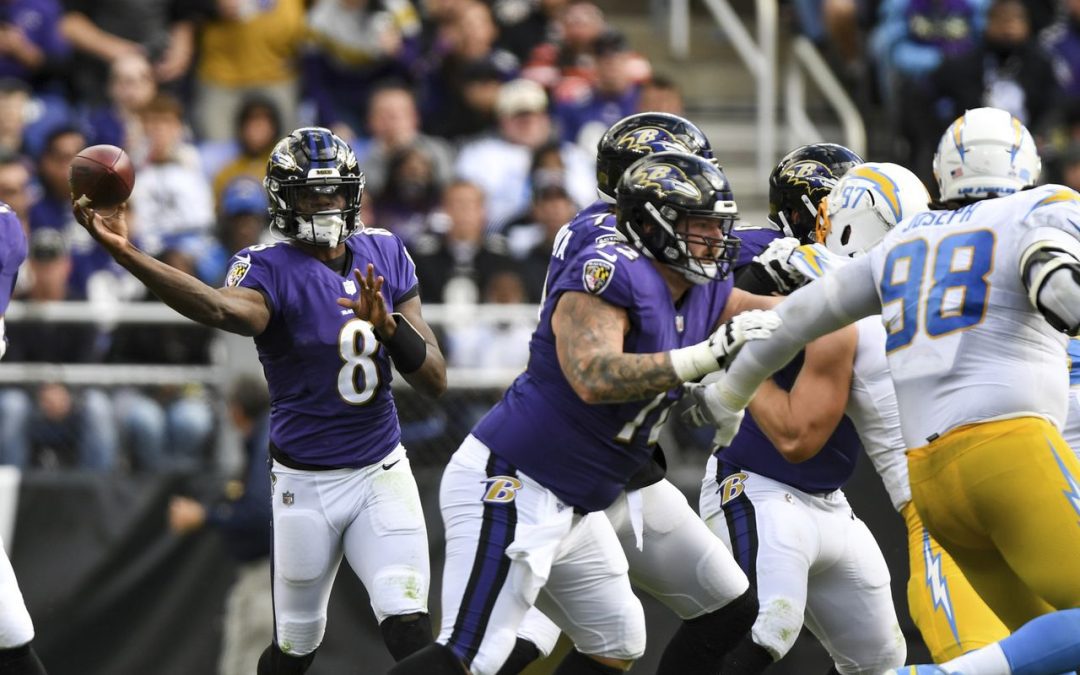 The Ravens headlined Week 6 by hosting the LA Chargers at M&T Bank Stadium for what was being viewed as the game of the week. Sadly, for the Chargers, it was a game they want to forget. The Ravens dominated from the start in route to a 34-6 drubbing of one of the best teams in the NFL. The offense got back to running the football in their signature dominant fashion, racking up 187 yards on 35 carries. Lamar was good, not great passing the ball but made lots of key passes that constantly moved the chains. The story in this game, though, was the defense. Holding one of the best offenses in the league to six points. The defense has been getting absolutely torched this season so it was nice to see them get back on track, but it’s especially encouraging to see them do it against a premier offense. There were plenty of players who played well, and some who played below expectation. Below I will highlight the 3 highest and 3 lowest graded players via Pro Football Focus (PFF).

For the second week in a row, Mark Andrews gets the nod as the highest graded player of week with a grade of 91.8. Andrews continues his dominant season with another “elite” grade from PFF. Andrews was targeted 6 times, reeling in 5 catches for 68 yards and a touchdown. All 5 catches resulted in either a first down or a touchdown. Andrews’ average depth of target (aDot) was 13.3 which was easily the highest of the game, the next closest pass catcher was Hollywood Brown with 7.8. Andrews dominated the middle of the field; he caught every medium pass (10-19 yards) which resulted in a perfect QB rating when targeted (158.3). Andrews continues to show week after week that he is one of the best tight ends in the league. He’s currently PFF’s highest graded tight end and will look to continue his dominance next week against division rival, Cincinnati.

Normally I do not list players who play less than 25 snaps but I felt it was necessary in this case. Patrick Queen left the game after only 19 snaps due to injury, but recorded the second highest grade this week and his personal highest of his career. Queen had a PFF grade of 90.5 and Ravens’ fans should be thrilled seeing this grade. From Weeks 2-5, Queen was the lowest graded player every week. But he snapped that streak against the Chargers. The former LSU tiger had 3 tackles but more importantly, zero missed tackles. This marked the first game this year in which Queen did not miss a tackle. He also did not allow a target into his zone; another impressive stat. Teams have been picking on the Raven’s young linebackers all year, which prompted the coaching staff to start Josh Bynes and move Queen to the weakside. Both Queen and Bynes had excellent games and you wonder if this will be the gameplan going forward. Hopefully Queen can continue to improve going forward, he is too talented and gifted physically to give up on. Next week he will play his college buddy, Joe Burrow. The last time they played in Baltimore, Queen had his then highest PFF grade of his career. He had a strip sack of Burrow and Baltimore completely dominated that game. Hopefully Queen and the Ravens find similar success this time around.

Deshon Elliott rounds off this list coming in with a PFF grade of 76.7. Elliott returned from a two-game absence and had his best game of the year. Elliott recorded his first career interception on an impressive play covering Jared Cook up the seam. He also added a sack and two tackles, and he did not miss a tackle. Elliott was seemingly everywhere in this game, his alignment count are as follows: 28 snaps at free safety, 18 in the box, 4 at slot corner, and 5 on the defensive line. Elliott was a Swiss army knife in this game, rushing the QB, covering tight ends and wide receivers and also playing the run effectively. Known as a thumper because of his big hits, Elliott had a nice game in coverage. Not only the interception, but he was targeted 4 times and only allowed one reception which went for 25 yards. It’s good to see Elliott come back and play well, the Raven pass defense had been dreadful this season, hopefully his return will spark more good play from this defense going forward.

Madabuike comes in as the lowest graded player of the week with a PFF grade of 51.1. Madabuike has had a solid season thus far but didn’t have a particularly good showing in this one. He had 19 pass rush snaps and did not have a pressure, hurry or QB hit. The promising second year player will have plenty of good games in his future so I would not be too alarmed about this performance. He is one of the most important players on the Ravens defense and he will continue to improve. He gets to play one of the worst offensive lines in the league next week when the Bengals come into town.

Bradley Bozeman finished the game with a PFF grade of 53.6. Bozeman has had a very good year so far so I think this is more of a blip than a theme. He had his worst pass blocking game of the year with a grade of 28.5. He allowed two pressures and allowed a sack. Bozeman has enjoyed a very good season after switching from guard to center. Like Madabuike, he is one of the most important players to this team and I doubt you will see consistently poor play from him. He is PFF’s tenth highest graded center this season and I suspect he will finish around the mark once the season is over.

Chuck Clark finishes as the third lowest graded player of the week with a PFF grade of 53.9. Clark didn’t have an egregiously “bad” game by any means. He had a PFF tackling grade of 80.9 but the overall grade was brought down by his coverage grade which was 50.3, his lowest of the year. He was targeted 3 times, allowing 2 catches that resulted in 29 yards. Clark has enjoyed a good year so far but this was his “worst” game of the year. He is currently PFF’s 13th highest graded safety on the season. None of the 3 players this week are frequent flyers on this list so there is no need for panic. Clark will look to rebound next week against the Bengals and their stable of excellent pass catchers.

The Ravens now turn their focus to the Cincinnati Bengals; a team Lamar Jackson has never lost to. They open up as 7-point favorites at home. The Bengals are playing well right now, Burrow and Chase are completely in sync at the moment and will pose as a major threat to the Ravens secondary. The Ravens, however will have a matchup advantage in the trenches. The Bengals are currently the 13th worst pass blocking unit according to PFF. They’ve allowed 47 pressures through 6 games so far, conversely, the Ravens blitz at the third highest rate in the NFL. Burrow will need to be sharp in this one, last year he completely crumbled against the Ravens’ pass rush. He was pressured 15 times and looked completely lost against Wink Martindale’s blitz packages. He had a PFF grade of 42.6. The Ravens will hope for a similar result in this game, if they win, they will be 6-1 going into the bye week.